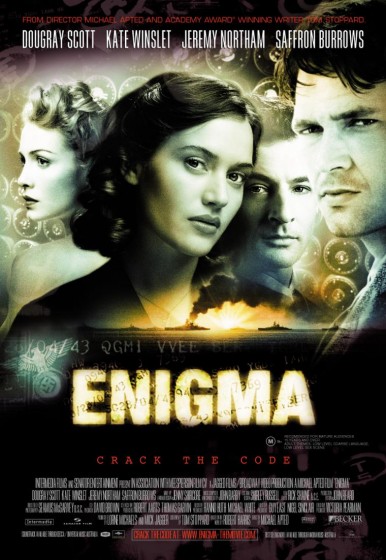 Welcome back to a semi-regular feature on FITI called ” A Cult of One.” It highlights an older film that (IMHO) is worth discovering.

Enigma actually was fairly well-received at the time, but it seems to have vanished from the cultural conversation. I want to celebrate this terrific spy thriller before Morten Tyldum’s drama The Imitation Game is released in a few weeks.

The Imitation Game is based on a true story. It stars Benedict Cumberbatch as Alan Turing, the British computer scientist who in World War II cracked the Nazi’s Enigma Code, their communications encryption, at Bletchley Park. Later in his life he was convicted for gross indecency for having sustained a homosexual relationship.

Enigma is a fictionalized account of the same events. In it, there’s no Turing—there’s Tom Jericho (Dougray Scott), a heterosexual scientist recovering from a nervous breakdown, returning to Bletchley Park after a month away. Turns out it was more than the stress of decoding Nazi transmissions that triggered the breakdown. He was in a relationship with the park’s resident femme fatale, Claire (Saffron Burrows), and the resulting heartbreak sent him into a tizzy.

The first act is nicely structured between the “present,” — Claire has vanished — and frequent flashbacks to the  “past, ” the months previous — Claire and Tom Jericho’s fling.

We meet Tom’s colleagues at The Park, including Logie (Tom Hollander), Cave (Matthew MacFadyen), and Puck (Nicolaj Coster-Waldau, who many will recognize as Jamie Lannister from Game of Thrones): 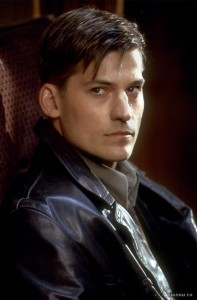 The Nazis have changed their code references for their Enigma machines, making their U-Boat fleet effectively invisible to the Allies in the North Atlantic. As a convoy of supply ships steams from the US to Europe, the cryptanalyst  team works feverishly to find a way to re-crack the Shark code.

The question hangs in the air: Why did the Nazi’s choose now to change their encryptions? Does it have anything to do with the disappearance of Claire? Was she a spy? Intelligence officer Wigram (Jeremy Northam) wants to know.

Tom launches his own investigation into Claire’s whereabouts with some help from Hester (Kate Winslet), Claire’s frumpy roommate. They discover Claire was hiding a handful of intercepted communications, but why? And for whom?

The MVP here is screenwriter Tom Stoppard, who once again manages to make juicy and compelling  what could potentially have been a dustier piece for PBS Masterpiece Theatre. (His adaptation of The Russia House is a favourite of mine.)

Enigma a mystery story on multiple fronts: what was Claire into, where is she, and how the codebreakers can possibly save the convoy before the U-Boats destroy them. It’s also a bit of a love story, between Tom and Claire, and then later, perhaps predictably, between Tom and Hester. It’s a sharp historical fiction, showing how a group of socially awkward math geeks helped win the war. And it’s a cracking thriller, offering deceit and nationalism among the characters’ motivations.

Renowned documentary filmmaker (the 7-Up series) and one-time James Bond director Michael Apted tells the story deftly, and in enlisting legendary Bond composer John Barry to do the score, brings a touch of 007 to the proceedings.  While the film’s approach to spycraft is much more John Le Carré than Q Branch, the music has an undeniable pulse-quickening effect. It turned out to be Barry’s final film score.

Dougray Scott is a bit of a sullen presence. 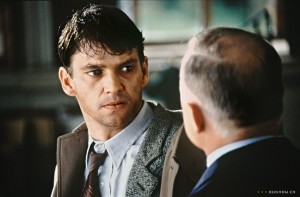 Whenever I see him I’m reminded that if he hadn’t hurt himself playing the villain in Mission Impossible 2, he would have been the actor to play Wolverine and Hugh Jackman, we may never have known you. I can see how Scott could be threatening, but here he just seems a bit beaten down, with his coffee-stained eyes. Fortunately, everyone around him sparks. 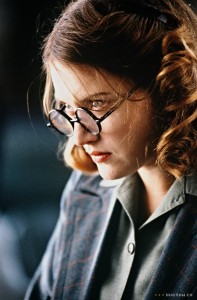 Credit the hair and make-up department for diminishing the natural effervescence of Kate Winslet, but even so she can’t help but be beautiful and compelling — the poster-makers made sure to get her without the spectacles. Saffron Burrows is eye-catching, as she’s meant to be. Only Jeremy Northam is a bit off — his Errol Flynn style feels false. I think he could have reined it in a little.

Overall, it’s great fun. The Imitation Game will need to excel to eclipse it.