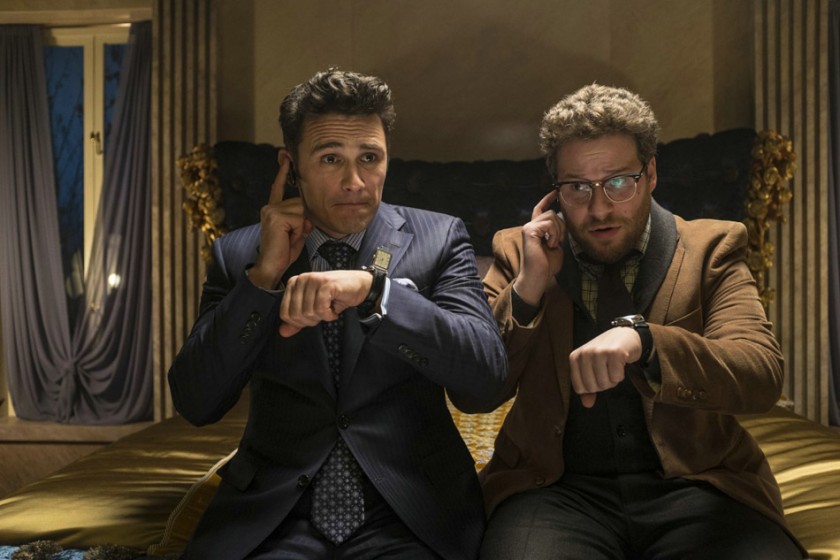 This is the official beginning of the holiday movie season, the release of the third (and final, whew) Hobbit movie from Peter Jackson. I’m not someone who has a hate-on for these movies, but I certainly understand those who do. And even the folks who will line up tonight to see the first screening, I think most of them would admit that this book didn’t need to be split into three very long parts.

The big news of the season is what’s happening with The Interview. Who would have guessed that a Seth Rogen/James Franco comedy would be the most controversial movie of the year? It was scheduled to be released Christmas Day but Cineplex isn’t going to release it in Canada as planned.

(Haven’t any of these terrorist hackers seen Team America? Trey Parker and Matt Stone must be backing up their computers and hiring security right about now. ) The Hobbit: The Battle of the Five Armies

I think the real problem with The Hobbit isn’t its length, though there is definitely some fatigue associated with that.  It’s that we don’t have a compelling sense of Bilbo’s reason for going on this adventure—with Frodo we understood the trek to Mordor.  And we don’t care enough for the multitude of Dwarfs to feel involved in their need to reclaim their birthright.

I’m sure, despite this, the film will make a bucketload of money. I’ll have a review up here on FITI soon.

The following movies all open Friday. Pretty much a shoo-in for acting awards, I can’t deny Steve Carrell, Channing Tatum, and Mark Ruffalo deserve the attention they’re getting for their work in Foxcatcher.  But I found the film dreary and remote. Night At The Museum: Secret of the Tomb

I haven’t seen any of this franchise, though I have nothing against an entertainment for kids that gets them excited about history. The one part of this entry that interests me is that some of it was shot at The British Museum in London. An amazing place. Having recently seen part of the Annie that was made back in the early 1980s, I was stunned at the scale of the film and how funny Carol Burnett can be, while repeatedly annoyed at the earworm jingles. Reimagining it with Quvenzhané Wallis and Jamie Foxx may be a winning idea. (Or maybe not. As of this writing it has 21% on Rotten Tomatoes.) A family dramedy from India (with an awesome poster) opening at the Scotiabank Halifax Theatre in Bayers Lake. It’s directed by Rajkumar Hirani and stars Amir Khan.