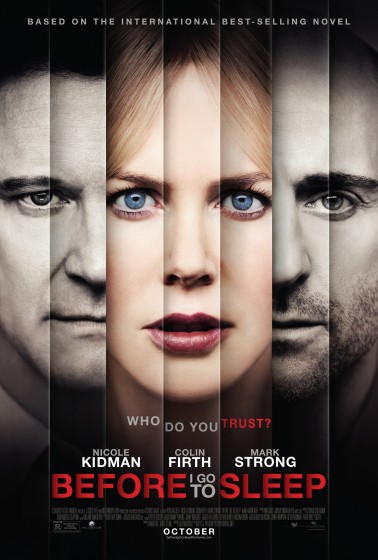 Directed by Rowan Joffe, adapted by Joffe from the novel by SJ Watson

Christine (Nicole Kidman, far more expressive than she’s been in awhile) is an amnesiac. Every morning she wakes as a 40-year-old woman, her memories blank back to when she was in her 20s. The past decade is a mystery. Her kind and patient husband, Ben, helps her remember what’s happened through post-it notes and photos from their lives together while she keeps a video diary.

Yes, this is the thriller version of the Adam Sandler/Drew Barrymore picture 50 First Dates, though it’s real antecedents are noirish dramas of the 40s and 50s, claustrophobic mysteries squeezing suspense from dimly lit rooms and poisonous character motivations. I wish this was as good as some of those were.

Christine is afraid, uncertain if she should trust Ben. She seems more trusting of a man who calls her every morning after Ben leaves for work, a brain doctor named Nasch who takes on her case pro bono to help her recover her memories, all the while crossing the appropriate lines of the doctor-patient relationship and suggesting she not tell Ben about the treatment she’s receiving.

Right from the start this doesn’t make much sense. Why should she trust what Nasch has to say rather than Ben? Nasch tells her she lost her memory due to having been attacked, shares news clippings of the event, while Ben says it was a car accident. Evidence suggests Ben is lying to her, but maybe it’s in order to protect her from reliving daily trauma.

Christine’s quest of self-discovery leads us through her life in a very Memento-esque way.  We share her victim’s perspective, learning details as she does of friends who’ve left her behind and the fate of a son. Should she trust Ben or Nasch? What happened to cause her memory loss? Was she having an affair?

Before I Go To Sleep is the kind of genre piece conceived and driven by premise, not hinging on character. I never got the sense that any of the people in the story were actually making decisions and propelling the action in the movie. They’re preprogrammed, walking through a set of plot twists orchestrated by the filmmaker. After the first act we can expect a reveal every 15 minutes or so that will show someone’s been lying, if not why they’ve been lying. The actors become dancing meat puppets, zombies shambling through gloomy interiors and exteriors, dampened by rain and, occasionally, tears. Joffe simply fails to make us care, despite a set-up that, given more verve in the direction and script, could have delivered a little more suspense and a lot more fun.

The thing that gives Before I Go To Sleep its most substantial emotional impact is the timing of its release. This is a lurid psychodrama featuring more than one scene of a man beating a woman about the head and face, drawing blood. In one of those scenes he tries to strangle her. Given the conversations in the past week around the Jian Ghomeshi scandal, this fairly generic entertainment should come with a trigger warning.