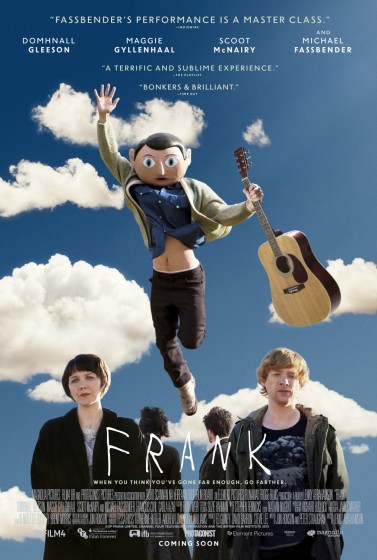 Frank is a strange little backstage comedy/drama on its surface. Underneath it’s a solemn examination of damaged people inside a circle of attention and creativity. It’s maybe got a dash of Almost Famous, but it’s far more peculiar. You should know, a favourable comparison to Cameron Crowe’s masterpiece is one of the strongest recommendations I can muster. Frank is a special treat. 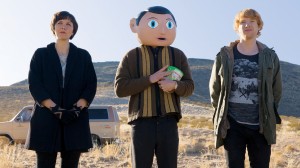 Loosely based on the story of British musician Frank Sidebottom, the story launches nowhere near the titular character. Jon (Domhnall  Gleeson) is a struggling songwriter and musician living in a small city on the grey English coast. We spend a day or so with him as he goes about his business, desperately trying to write songs. It’s sad and hilarious and reminded me a little of the best moments of Ishtar, the part detailing the songwriting struggles of Rogers and Clarke.

Jon gets the chance to join a music group (with the unpronounceable name Soronprfbs) when one of their members tries to kill himself just before the band plays a gig in Jon’s town.  The other band members include Don (Scoot McNairy), a guy struggling with a few personal demons, Clara (Maggie Gyllenhaal, amazing as always), a pissed-off theremin player, and creative genius and lead singer Frank (Michael Fassbender), who never takes off his giant papier-mache head. He’s figured out how to eat, sleep, shower and sing with it on, and the mystery of why he wears it and what’s going on underneath the unblinking, perpetually astonished expression haunts the film.

Jon is invited to join the band on tour and as they retreat to a remote Irish cabin in order to work on their next album. I won’t say too much about what happens there. This is where the less you know going in the better. But John, fighting for a proper place in this collective, starts to have his own ideas on the direction of the band, acting as its defacto public relations person and posting clips from the recording process on YouTube.

It’s kind of a stunt to hire an actor as recognizable as Fassbender and then hide his face for the duration of the tale, but his character is so weird and unpredictable, I can certainly understand the appeal for him. He also gets to dance and sing in a distinctly high-pitched un-Fassbender-esque voice.

Jon is the audience’s avatar in this collection of characters, though his own ambitions for fame and attention undermine a lot of his appeal. It’s a balancing act for Gleeson, who is so good in the role. He’s an unconventional leading man, and is wonderful. I gather he has a part in the upcoming Star Wars sequel. I look forward to seeing him in it.

And as the film shifts into road movie gear in its third act, the hollowness of pursuing a career in the spotlight comes to the fore, and the film’s established awkwardness melts into compassion for how identity manifests in the act of making art, and the crippling reality of mental illness. It’s a grim vision, but Frank‘s sincerity and core sweetness is what lingers. 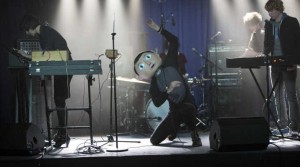