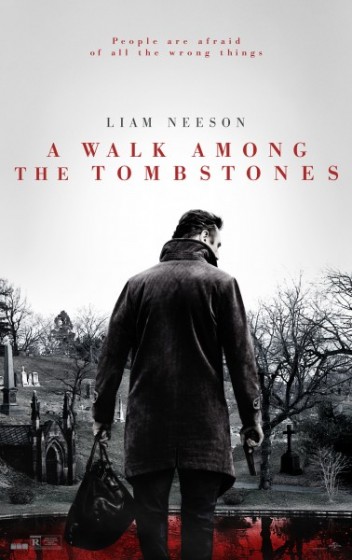 The Equalizer—directed by Antoine Fuqua, written by Richard Wenk, from the TV series created by Michael Sloan and Richard Lindheim

A Walk Among The Tombstones—written and directed by Scott Frank, adapting the novel by Lawrence Block

A trailer for a something called John Wick, opening later this month, ran before A Walk Among The Tombstones.

This is what I learned about that movie from the trailer: Keanu Reeves plays the titular Wick, a guy who drives his super-cute beagle around in a classic Mustang. Theon/Reek from Game of Thrones maybe does something bad to the dog.

That’s all the motivation Wick needs to reconnect with the man he once was, the badass he left behind, back when he got a whole lot of tattoos. He was so sure he wasn’t that man anymore he sealed up all his guns in a cement floor. We see him take a sledgehammer to that floor. 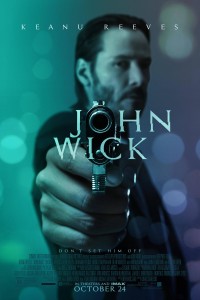 I’m really noticing the common thread here: Middle-aged fellow, maybe without a lot of family, someone with a shadowy history in security, law enforcement, or assassination. He made a promise to someone he’d stop doing that stuff. Maybe a promise to himself. He’s left it behind, he’s different now. He doesn’t need to bash someone’s head in to prove he’s a man.

But motivated either by compassion or revenge (usually for a woman who is victimized—don’t look for any Bechdel Test passers here) he comes out of retirement, using his special set of skills and gift for violence to reconnect with his true, best self, and thereby redeems any of the bad things he might have done way back when. Now he can live peacefully with both his guns and his self-respect. There’s got to be blood-spatter =redemption chart somewhere.

This hoary genre is wish-fulfillment for aging boomer guys and conservatives maybe a little frustrated by their impotence (political or sexual, take your pick), not unlike what Charles Bronson and Clint Eastwood used to do. Right now Liam Neeson is the king with his Taken films, a third expected in January. However, Denzel Washington in The Equalizer cleaves much closer to the template as described above than Neeson does in A Walk Among The Tombstones, which is a more complex story all around. 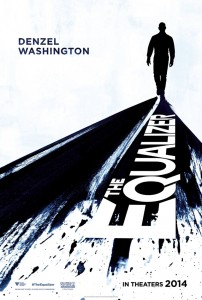 The Equalizer is based on a TV series that ran in the late 80s about a former covert operative, Robert McCall, who retires in New York and runs classified ads in the newspaper (back when there were lots of those) offering to right wrongs and correct injustices. That he’s a wealthy white dude (the forever cool mid-Atlantic accented Edward Woodward) with no lack of resources and an awesome Jaguar was how they rolled back then. 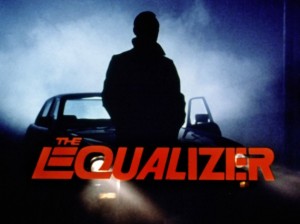 In 2014 he’s Denzel Washington, a blue collar guy working at the local home reno big box store, spending his evenings in a nondescript Hopper-esque diner reading Hemmingway, natch’. He’s got a bit of ADD, timing everything he does on his chunky watch, but not so’s you’d notice most of the day. He takes pity on a local working girl (Chloë Grace Moretz) who gets beaten up by her Russian gangster pimp. Five dead thugs later, and the crime boss takes notice, sending a fixer (Martin Csokas). It’s not long before Mr McCall is a big thorn in the Moscow-run operation, exhibiting abilities verging on the superhuman, including a MacGyver-level of ingenuity with what’s handy. Good thing his day job is at Home Depot and the inevitable showdown takes place on the sales floor. 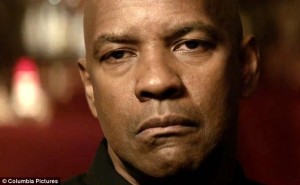 Like I said, total wish-fulfillment. Antoine Fuqua is far from my favourite director—he underutilizes every location, making Boston look like a generic rundown everycity USA—but he does have a knack for the action set-pieces, especially the close-quarter fight scenes. He even finds time to have Denzel walk away in slo-mo from an enormous explosion (that killed how many people, you’ve got to wonder). This is the kind of movie that commits unreservedly to its myths, and you’ve got to as well if you’re going to enjoy it. No, I didn’t believe any of it for a second, but I did have a good time.

Another bit of connective tissue between these movies is David Harbour: A corrupt cop in The Equalizer, he’s a former DEA agent turned psychopath in A Walk Among The Tombstones.

What makes the Liam Neeson film less of a pure action exercise than The Equalizer—and a more sophisticated take on the middle-aged redemptive hero trope—is that the lead character has real regrets, a bigger demon to exorcise. He didn’t used to kill people just because it was part of his job, he let his alcoholism affect his work. He made mistakes, back when he was a cop. Now he’s an unlicensed private eye, attending AA meetings regularly.

And the movie isn’t all about his redemption. It’s a murder mystery, which at times feels like something you might watch on network TV. That’s not necessarily a bad thing. An ensemble, many of whom get speaking roles and fully fledged motivations—tellingly, Neeson isn’t always on screen—makes for a lot more character flavour to savour, along with a few slices of unexpected humour.

Neeson gets hired by a drug dealer (Dan Stevens, who is really stretching since Cousin Matthew in Downton Abbey) to find out who killed his wife. Turns out there are a couple of very bad guys abducting dealers’ girlfriends, wives, and daughters, extorting cash for their safe return, sometimes cutting the ladies into little bits anyway.

Neeson’s Scudder spends much of the film’s running-time investigating past murders and asking questions through the rougher sides of Brooklyn, hanging out with folks like troubled teen TJ (Brian Astro Bradley) and fellow AA attendee and painter Howie (Eric Nelsen).

So, while it’s gloomy, grimy and regularly bloody, A Walk Among The Tombstones satisfies in ways beyond the pure action fix, but it also may frustrate those looking for another Taken with its more gradual pace and rambling narrative. But does Neeson get on the phone and threaten a kidnapper? He sure does. As usual, he’s often the best thing in these movies and a reason to go see it at all.

Interestingly, it’s largely set in 1999, with the Y2K fear hovering over the movie, but if there’s a genuine thematic reason for the period, I don’t see the point of it. It’s just one of the ways the film exerts its own personality on some common and cliched genre elements, which I’m all for. It doesn’t all have to make sense, or wrap up neatly and nicely. It can have some pointless shag.