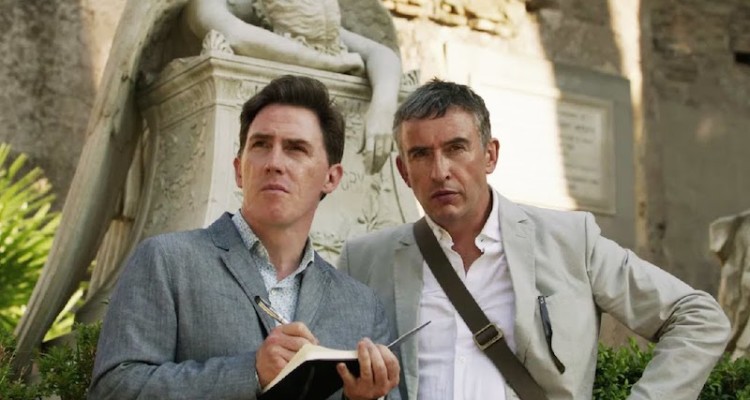 Written and directed by Michael Winterbottom

I was so thrilled to discover this 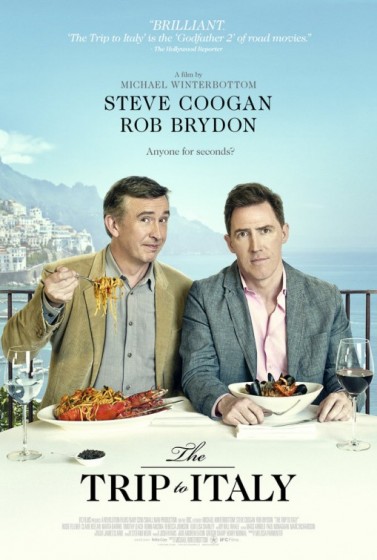 sequel exists! The first movie, The Trip, from 2011, was a whole lot of fun—Steve Coogan and Rob Brydon improvising dialogue, riffing off each other, while driving around and eating at gourmet restos in northern England. The film functioned as a gorgeous travelogue, a foodie movie, and an often hilarious examination of the strained, combative, but secretly affectionate relationship between two middle-aged guys who’re feeling the years in different ways.

The sequel, structurally, is more of the same. But it’s better in at least one distinct and hard-to-argue-against way: it’s set in Italy!

Coogan and Brydon drive a convertible Mini around some of the Mediterranean country’s most beautiful landscapes—Liguria, Tuscany, Rome, Amalfi, and finally, they take a boat to Capri. All the while downing platefuls of sumptuous-looking Italian dishes.

Lots of pasta, naturalmente, but also a selection of incredible seafood. I thought Chef was going to be the year’s top foodie movie, but this one takes the torta. Make your Italian restaurant reservations in advance of the screening for when you get out. You’ll be wanting to head over directly.

Coogan and Brydon seem a little more relaxed with each other this time out, discussing films (especially ones set in Italy, or starring Michael Caine), poetry (tracing Shelley and Byron’s steps through the country), and, of course, the challenges of getting older. 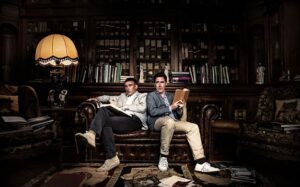 Coogan seems less threatened by Brydon and happier in general, which makes for an interesting reversal in their characters. In fact, Brydon makes a decision that seems a bit rash and perhaps contrary to the image of the devoted family man we met in the last film, while Coogan decides to be a responsible parent, inviting his 16-year-old “son” (Timothy Leach) to join the tour, plucking him from an Ibiza vacation with his mother he wasn’t much enjoying.

The undercurrent of middle-aged anxiety is still a strong thread, grounding all the jokey frivolity and gourmandising in a sense of drama that allows for more emotional investment in the characters. Both men are successful comedians, competitive for attention and desperate to hang onto whatever youthful vitality they have left, much of it defined by their appeal to the opposite sex. No surprise there, but their shared affection for Alanis Morissette? That’s unexpected.