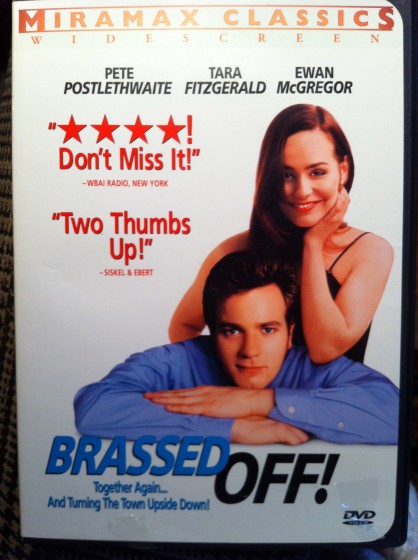 After having enjoyed the  gay-activists-raise-funds-for-Welsh-miners-comedy Pride—probably the best thing I saw at the  2014 Atlantic Film Festival—I decided to revisit Brassed Off!, the 1996 comedy-drama about a group of miners in Grimley, near Worcester, Northern England, whose pit is threatened with closure.

Will the miners’ union fight to keep it open or take the management offer? On the line is more than just their livelihoods, it’s the town itself and generations of tradition. The only thing most of them have to keep their spirits up is a brass band, one whose membership has been filled by miners for 100 years. And just then it’s in a national contest for the best brass band in the land.

I hadn’t seen the movie in years, but I recall it being a comedy set in the bedrock of real-life drama. Seeing it again I’m reminded of many things; it’s moving, well-acted, and far from breezy.

First off, it’s an ensemble piece. Though the film does include (at the time) a freshly minted Hollywood entity in Ewan McGregor, he doesn’t get an especially large amount of screen time. He shares it with great British thesps including Pete Postlethwaite, Stephen Tompkinson, Jim Carter, Philip Jackson, and Tara Fitzgerald, as a miner’s daughter who’s returned to town secretly working for management. She also happens to be cracking flugelhorn player.

The humour is wry and grim—these people are losing everything, yet manage to squeeze a few laughs from their situation. But as the band’s fortunes improve, one character’s wife and children leave him, he loses his house and all his possessions. He tries to earn a little extra money as a birthday party clown, but has a breakdown in front of the kids, swearing and raging against the Tories and God. Here’s part of his rant against the Almighty:

“What’s He doing? He can take John Lennon. He can take those three young lads down at Ainsley Pit. He’s even thinking of taking my old man. And Margaret bloody Thatcher lives! What’s He sodding playing at, eh?”

Then he tries to commit suicide.

Another character has a terminal health crisis, the likely result of years spent underground. Almost all the characters have dire financial difficulty—one bets and loses his instrument in a game of pool. And there isn’t much of a happy ending—at best, it’s a kick at the darkness.

Yes, there’s a little romance. Fitzgerald’s character made out with McGregor’s when they were both 14, and they sort of rekindle their fumbling teen intrigue. He has a night at her place, though that’s before he finds out she’s management. It’s a very small part of the overall picture. McGregor’s character is all out of hope, too:

“The only reason I get up in the morning is to see if my luck’s changed. And it never bloody has.”

Consider all this—the miners, the ensemble, the brass band, the life-and-death circumstances, and the tiny romance—when you read the blurb on the back of the DVD box: 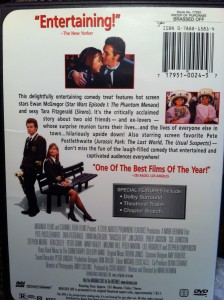 I wonder what a “screen favorite” is.