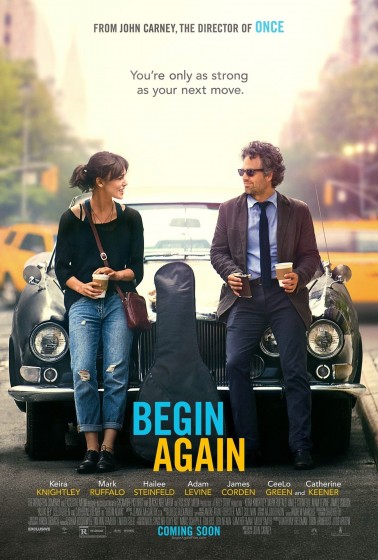 Written and directed by John Carney

Eight years ago, Irish filmmaker and musician Carney directed a wonderful little film called Once, about a longtime busker who takes a young pianist under his wing. It was a shot-on-a-shoestring delight, and the song that brought them together went on to win an Oscar.  Carney made another little-seen Irish movie, but now has come to Hollywood to do a Once-like picture about musicians except with recognizable stars and a budget, set in New York instead of Dublin. And while it does manage to recapture some of the magic around music-making, in the mix it loses much of the authenticity its predecessor had in spades.

(There are plenty of music recording metaphors I could throw at this, but I’ll try and restrain myself. I may not succeed.)

Dan (Mark Ruffalo) is a record executive having the worst day of his career and self-medicating with booze. Greta (Keira Knightley) is a songwriting Brit in the Big Apple with her rising popstar boyfriend Dave (Adam Levine, never for a second losing his baked-in smarm). Their paths cross at an open-mic where Greta’s song inspires Dan like nothing else has in a long time. He pursues her to make a record, which along the way gives them both a reason to deal with the problems in their lives.

Lots of schmaltz and bum notes (sorry) threw me off from the start. It’s especially frustrating, because not only is the film actually about the pursuit of truth in art and life, but you can see where Carney manages to periodically achieve something real. Or, at least, Knightley does: Like when Greta realizes a song Dave has written was inspired by someone else, and slaps him. And when Greta decides to write a song for Dave and sings it to his answering machine. And later on, when we get to see people making music together on rooftops. Those are good moments.

However, the chemistry between Knightley and Ruffalo is just wrong. The audience should be charged up by the possibility of their will-they-won’t-they romantic connection, but every time it looks like they might hook up, I got queasy. When they walk around the city listening to their guilty pleasure songs it made my skin crawl. There are times like these when a tweak in the script—to maybe turn it towards comedy and away from the drama—might have worked better.

I generally like Ruffalo, but his grizzled industry vet is too broad, and he isn’t helped by an undercooked subplot where he’s trying to reconnect with his teenaged daughter (Hailee Steinfeld) and estranged wife (Catherine Keener). He and Keener don’t have a single resonant scene together, which seems to me a real waste of both their talents. Go see Chef if you want to see the distant-but-remorseful father trope played out with more pizazz.

As I mentioned, Knightley is winning as Greta—her voice is good and I bought her ease as a performer, and the scene where Dan reimagines her material with a full band is clever—but I found it a bit hard to believe that her songs are special enough to warrant Dan’s enthusiasm. She and Dan come up with the concept of recording in outdoor locations around New York, an idea that works well for showcasing the city’s dazzle onscreen, but come on—it’s very hard to buy the idea of a debut recording that includes the din of Manhattan in the background of every song. That effort to be real feels flawed at the root.

So, not nearly as moving his indie crowd-pleaser of yesteryear, Begin Again suggests Carney shouldn’t lose sight of his original barebones approach. I’ll look forward to a more live-off-the-floor production the next time. (Sorry again.)