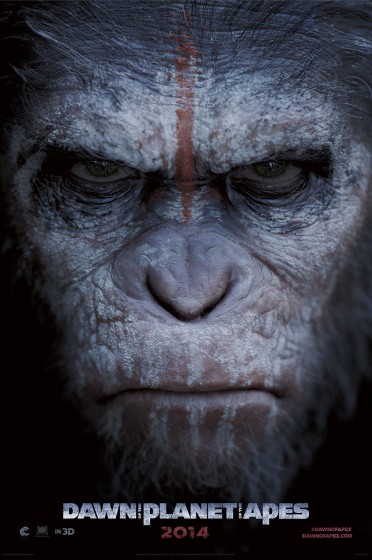 I enjoyed Rise of the Planet of the Apes, released back in 2011. It seemed an unlikely prequel to a 43-year-old film, but as a slab of b-movie entertainment I thought it worked. My biggest beef with it was the sub-standard CGI; in close-ups the super-smart apes looked no more “real” in the actual space of the scenes than Roger Rabbit did in his movie.

Three years later and the CGI has gotten marginally better. Unfortunately, the by-the-numbers script, characters and dialogue make for a so-so prequel sequel.

In narrative terms, we open a lot of years removed from the ape revolution in Rise. Humans have been largely wiped out by “simian flu” while Caesar (Andy Serkis doing the motion capture thing) and his “people” are living peacefully in the hills outside of San Francisco. Humans enter their territory (Jason Clarke, Keri Russell, and youngster Kodi Smit-McPhee, along with whiskered leader Gary Oldman, along with a few other forgettable characters) looking to restart a dilapidated hydro-electric project in order to bring electricity to the remaining Bay area residents. This triggers a power struggle among the apes, between Caesar and his son, Blue Eyes (Nick Thurston), who want to help the humans, and scarred warmonger Koba (Toby Kebbell), who doesn’t trust the damned, dirty people. Before long, weaponized primates are advancing on the human outposts despite the best intents of the good folks—both hirsute and markedly less so—hoping to avert war.

I liked the way the movie showed how fear and hate are endemic across species. It didn’t matter a bit that one community was human and one was apes—this could have been a story of two different tribes of humans fighting over shared turf, resources, security, and power, or two groups of simians. And the efforts of Clarke’s Malcolm to reach out to the apes, in the futile hope that they’ll learn to trust the humans, is the heart of the film. He and Caesar do manage to form an alliance for all the good it does them.

What wore me down were the cliches in the way the story was told—boilerplate dialogue out the mouths of largely uninteresting characters behaving predictably—especially on the human side. Caesar was probably the most compelling onscreen creation, but you don’t need to go all the way back to Henry IV to find stories of uneasy heads wearing the crown. Though suspense manifests early in how the inevitable conflict will roll out, after a couple dozen gloomy scenes in the rainy forest, I had a hard time sustaining interest. I found myself waiting for the action sequences to give me a break from the rote character drama.

I thought future San Francisco was impressive to see—much like New York of I Am Legend—and I sat up in my seat when one of the apes took it upon himself to loot the human armoury, shooting two guards point blank. Attacking apes taking control of a tank was pretty cool. But moments of genuine intensity and genuine emotional intrigue come too infrequently.

And maybe the expectation these movies will eventually connect with the Charlton Heston classic works against them. Apes will eventually dominate our flabby asses with their aggressive nature and super-intelligence, we’re just getting to see how it plays out. It’s a suspense-killer, knowing how we’ll end up—damned all to hell.

And, yes, while my beef with the CGI in these films is more measured, it does continue. While the wide and medium shots of rampaging apes manage to deliver thrills, I still find the close-ups fall short of being convincing, especially in Caesar’s expressions. His son, Blue-Eyes, along with the orangutan,  Maurice, are more successful. A scene lit by torchlight where we see the flames reflected in Blue-Eyes’ pupils is gorgeous stuff.

But watching Caesar emote, and then when the movie cut back to a human face, I was still too aware of I was watching a bit of animation. The opening sequence of apes hunting deer and being interrupted by a bear was entirely unconvincing, as was a scene with a baby ape playing with Russell and Smit-McPhee’s characters that totally failed to make me believe the human performers were actually interacting with something alive.  And then there was an action sequence late in the running where chunks of building collapse—I felt like I was watching below-average video game graphics, unfortunately not the first time I’ve had that experience in this disappointing blockbuster movie season.

As I explained back in August 2011, in a movie set in a completely fantastic world—like, say, Lord of the Rings—I’m better at suspending my disbelief that magical creatures have a synthetic, CGI-like quality. But in a movie that’s supposed to convince us that clever genetically engineered simians can talk and interact with people, I much prefer the masks and make-up of the ’68 original, even the Tim Burton remake, to the distractingly obvious animation in these movies.