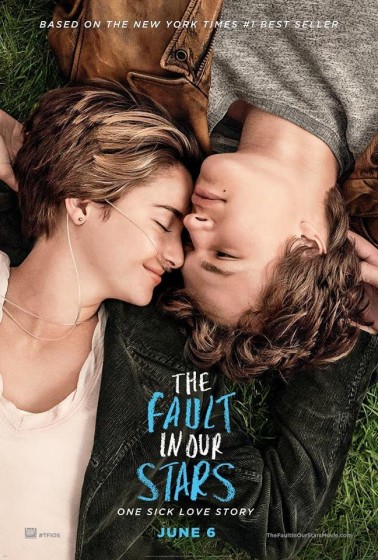 I saw the way this movie set me up to get emotional toward the end and it didn’t matter an iota that I was aware of its machinations. So, crying-credit where it’s due. There’s something to be said for a movie that gets you to feel something, even if it does it in the most obviously manipulative ways. That’s the key right there, isn’t it? I don’t mind being emotionally manipulated if it’s done gracefully, wherein I don’t notice the structure, the edits, character moments, the music. When it’s ham-handed, I resent it. In this case, though, I give the production a pass.

It would be lazy of me to call the movie a Love Story for a new generation, but I’ll just throw it out there for some context among my readers of a certain age. And how do I know it’s a new generation? Because the soundtrack doesn’t just have a single, plaintive piano/orchestral theme, but a bunch of tell-us-how-to-feel pop songs. The movie also has a V/O preamble where the lead character badmouths cancer dramas in books and movies for their cliches and their Peter Gabriel songs, then that lead character goes ahead and exists in a movie exactly as cliched as she badmouthed, complete with a Peter Gabriel sound-alike number late in the running.

I’m guessing here, but I’d bet the audience for this material—readers of YA novels, so Young Adults—appreciate a certain amount of self-awareness in their entertainment. They’ve been raised on irony like mothers’ milk—the film’s self-awareness makes it more sincere, not less. (I admit I may be off the mark here, but if someone wants to pay me I’ll happily write a thesis on it.)

The story: white suburban teen with lung cancer Hazel (Woodley) gets driven to a cancer support group in a church basement. She hates it, but it pleases her overly protective parents (Laura Dern, who looks too little like her screen daughter, and True Blood‘s shapeshifting bartender, Sam Trammell, who looks a lot like her).  There she meets Augustus Waters (Ansel Elgort, who played Woodley’s brother in Divergent), a too-goofy-to-be-true guy with a lot of confidence—and a stalker-y interest in Hazel’s thoughts and feelings—but likeable in that he doesn’t take himself too seriously. He lost a leg to cancer, but is doing OK besides. You know how we know? He’s OK with his sports trophies getting smashed if it’ll help a friend, and he keeps an unlit cigarette between his teeth because it’s a metaphor. For these reasons he’s meant to be extra appealing. I wasn’t entirely sold.

Hazel and Augustus fall in love over a book by a reclusive author (Willem Dafoe) and a chunk of the movie is spent with the couple either planning to go to Amsterdam to find him or being there.  The Amsterdam segment includes a seriously ill-advised scene where Hazel and Augustus kiss while visiting the Anne Frank house. Not only was it wildly inappropriate, there’s no way European tourists would have applauded that kind of PDA. Another way the movie-movie cliches manifest.

A further nit-picky annoyance: texts appearing on screen in cute, ragged voice bubbles and cursive fonts. I have seen the text-on-screen done well (see Netflix’s House of Cards) but this wasn’t one of those times.

The rest of the movie is a few chuckles with a barely there supporting cast and the inevitably teary final act. Only Nat Wolff as Isaac, Augustus’ friend who loses his eyes to cancer, really manifests, and he’s not very interesting. And director Boone lights and shoots everything like an episode of Degrassi Jr. High.

Elgort does what the movie needs him to do: be cute and practically flawless, missing leg notwithstanding. I wished he did pain as well as, say, Miles Teller, the breakout star opposite Woodley in The Spectacular Now—a movie that felt a lot more authentic than this one, but which didn’t succeed in making me cry.

You might be asking yourself, given my many gripes about the movie, how TFIOS managed to get me all weepy. I blame Woodley.  Her Hazel is a complete character, carrying the entire film on her narrow shoulders. However cloying the story gets, she’s never less than authentic.

When she cries, we all do.