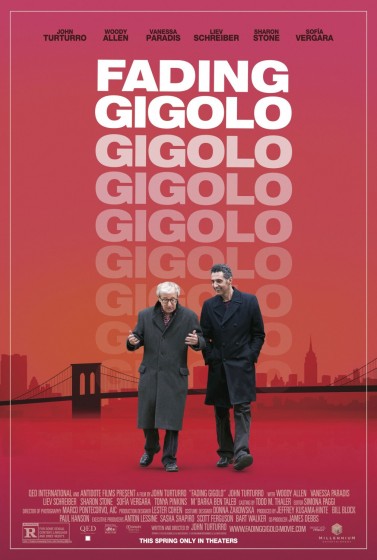 Written and directed by John Turturro

Murray (Woody Allen) is a New York bookseller. His buddy, Fioravante (Turturro), is a florist. Things are a little slow in both of their businesses, so Murray hatches a plan to pimp his chum out to dissatisfied, wealthy women, including  Dr Parker (Sharon Stone) and her libidinous BFF Selima (Sofia Vergara).

So, right from the get-go, audiences have to clamber over this almost insurmountable narrative implausibility: Sharon Stone and Sophia Vergara having to pay for male companionship and sex.

Murray also connects Fioravante with a grieving widow, Avigal (Vanessa Paradis), who has a not-so-secret admirer in Dovi (Liev Schreiber), a stalkerish police officer. Or neighbourhood watch—it’s not exactly clear what his deal is.

Fading Gigolo is at its best as the Murray and  Fioravante show. Allen’s comedic ease honed by 50 years in showbiz and Tuturro playing the strong, silent type makes for a solid double-act. Once I’d digested the high-concept set-up, I was hoping their unlikely business venture would get them in some awkward but hilarious situations. A 50-something New York gigolo and his 70-something pimp? There’s prime comedic real estate to be developed in that premise, middle-aged material that hopefully would avoid the viagra jokes of, say, Last Vegas.

But I found Fioravante’s emotional bond with Avigal upended the easygoing nature of the film. It swiftly becomes about intimacy rather than sex, with two lonely people trying to help each other heal. That’s fine, but  the chemistry between them almost entirely absent, and the picture drags when Murray is offscreen for too long. A third-act sequence bordering on farce picks things up again; mostly softball gags aimed at a group of whiskered, militant Hasidim.

Despite the film’s uneven tone, I found myself enjoying it. Turturro presents his story on top of a playful, jazzy score with great Brooklyn and Manhattan location cinematography, and he writes himself a solid, understated role. Though Schreiber doesn’t have much of a part, Paradis is fine, and Stone and Vergara are both a hoot.

But the real star of the film is Woody Allen—more funny and engaging than I’ve seen him be in maybe a decade of semi-regular appearances in his own pictures. Free of the responsibility of being the cinematic storyteller, he seems to be enjoying himself more. He should do it more often.