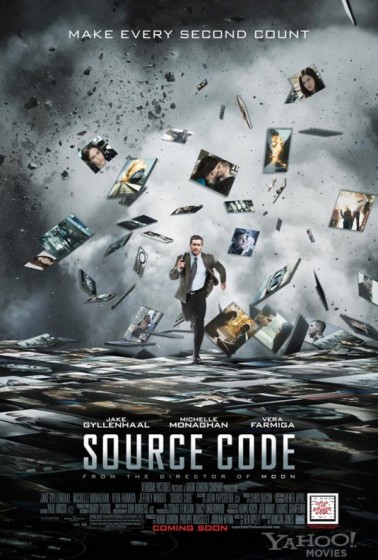 I’m enjoying these recent high concept science fiction pictures—though some more than others—including Limitless and The Adjustment Bureau, and now Source Code. This new film is built around another simple premise with a whisper of The Twilight Zone to it, not so unlike the idea of a secret, invisible office determining our fate or a pill that gooses our grey matter with exponential growth.

Here we have a soldier, Colter Stevens (Jake Gylenhaal, tenacious), forced under peculiar circumstances to live a specific eight minutes over and over again, riding shotgun behind the eyes of a teacher travelling on a commuter train into Chicago. At the end of eight minutes, the train explodes. Stevens’ mission, to figure out who set the bomb. The mechanics of how this happens, the flesh puppetry, isn’t particularly clear, but then it needn’t be. We do know that an organization is calling the shots, with a military component (represented by Vera Farmiga, always capable) and the science overlord (Jeffery Wright, as arch as he’s ever been).

This strange twist on Groundhog Day isn’t without surprises, particularly as Stevens begins to investigate the status of his actual, corporeal form outside the 480 repeating seconds. The romantic element, with Christina (Michelle Monaghan) is underplayed, though becomes more prominent as the story approaches its destination. Moon director Duncan Jones, this time opening his canvas to aerial shots, heavy CGI, physics and metaphysics, handles all elements of the script with a lot of confidence.

Underlying the fast-paced thriller is a small coterie of thematic concerns: a garden of forking paths and the breadth and reach of death are but two. I wouldn’t call it a twist, but a gorgeous Rube Goldbergian chain of events in the final act is a clever culmination of the conceit, making Source Code one of the more satisfying time-twisting diversions of recent times. The clear-but-distorted reflection  of Cloud Gate in Chicago’s Millennium Park at the conclusion offers a powerful metaphor in the possibilities of alternative realities, and is quite comforting.

One lingering question for those who choose to see it: Even if thousands of lives are saved, what of the guy called Sean who took that train every day, who gave Christina the good advice? What of his life?