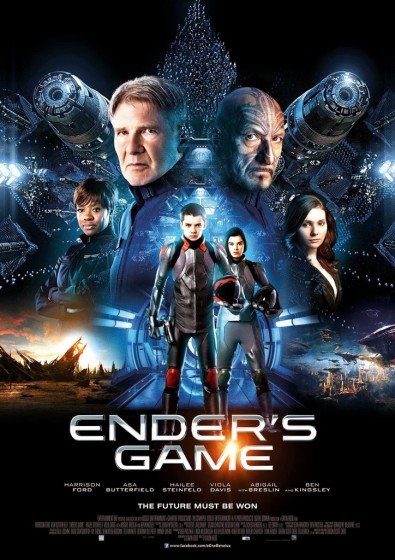 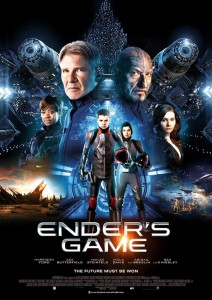 Ender Wiggin is a teenager with a gift for tactics. And on a future earth threatened by alien insectoids, that kind of skill is exactly what the global military is looking for. Apparently, children are required for protecting the earth in the future, because… their reaction times are faster? I was never quite clear on why these young people are our only hope, but there it is. Ender (Asa Butterfield), as an especially gifted youth is plucked by Colonel Graff (super-curmudgeonly but quite effective Harrison Ford) and Major Anderson (Viola Davis) to train in an orbital bootcamp with a bunch of other gifted youngsters, including the friendly Petra (Hailee Steinfeld). Ender continually impresses his military overlords, and gets promoted to an upper class, and, with some ease, to Command School, where he gets a chance to train for the big battle (with Ben Kingsley in Maori face tattoos and a plausible kiwi accent, but not much of a character), bringing the war to the alien bug home world.

If this sounds to you a lot like Starship Troopers, it did to me, too. Except the fascistic attitude of the people in charge is much more subtle and less satirical this time, making the whole production more suspect. The somewhat buried moral of the story is, in fact, humanism and compassion, anti-war, but unfortunately the thrust of the thing is so limp and emotionally removed, I didn’t much care when the rug gets pulled out from underneath our young hero again and again. This is a movie that should be anthemic, not anaemic. The themes are genuine and interesting, but it never really lights up.

Part of the problem is it never escapes its young adult source material. Unlike Harry Potter or The Hunger Games, which crossed-over with audiences of all ages—both the books and the movies—this film doesn’t quite engage at an adult level. And it’s not the plotting, which is reasonably complex and has a few good twists, it’s just the general tone of the thing. It’s clunky.

I lay this at the feet of Hood, who in movies such as X-Men Origins: Wolverine has shown he’s a ham fist with drama and character, while still delivering on the slick production values necessary in a tentpole.

And there are some fine sights in Ender’s Game. The art direction; props, costumes and especially sets are dazzling: the space station where Ender first trains is very smartly realized, especially the zero-gravity battle room, where he faces off in floating acrobatics against other cadets. It’s in those scenes that the film is at its best. I had the feeling this would have been much more compelling if it’d been paced like a sports movie, with our team leader going forward towards the championship, instead of a limp teen relationship and morality tale, which is how it plays out.

Then there’s the question of the work’s author casting a pall over all of this. Card’s politics and homophobic ideas are abhorrent. Best I can tell, the film has been scrubbed of any of his potentially nasty content—and some subtly distasteful stuff did exist in the book.

In order to be informed, I suggest reading this, and this, and also this. And if you’re looking for different ways to approach this film, I recommend checking this out.