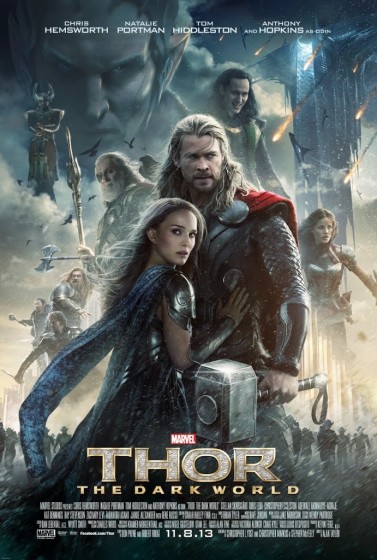 
Hard to believe this is the eighth big-budget entertainment in this daisy-chain of Marvel movies, going back to Iron Man in 2008. They’re really on a roll now—people know them and they like them—capped by the critical and commercial peak of last year’s The Avengers. Joss Whedon’s big movie delivered state-of-the-art superhero action, but it was the emotional and character beats that made it really work.

This, I think, is what these movies do so well: they inject just enough humour to save the productions from po-faced ridiculousness and generic CGI wash. And that’s a good idea when making a movie about Norse gods who are, in fact, aliens: apply a little levity now and again. I wouldn’t be surprised if the funniest bits of Thor: The Dark World were thanks to Whedon—he was brought in for script doctoring because five writers wasn’t enough, apparently.

What I liked about the first Thor movie was that director Kenneth Branagh managed to take one of the silliest heroes from the Marvel canon—the guy with the winged helmet and the giant mallet—and with his baked-in Shakespearean sense of drama, made it work with just enough realism to carry the day. What I didn’t like was it felt a bit too machine-tooled, a bit too safe and not so special in comparison to the rip-roaring Iron Man.

With Game of Thrones veteran Taylor on board, this one’s still of a formula, but now, the pieces all click just a little better. Though I rarely credit a producer with this kind of thing, I think Marvel bigwig Kevin Feige deserves a tip of the hat for a lot of the good in these movies. And while there aren’t really too many surprises this time, there are more laughs, and as a result I enjoyed it more than the first Thor. (……it’s no Avengers, mind you.)

We pick up not long after the events of that movie: Thor (Chris Hemsworth, continuing to be solid) has returned Loki in chains to the home of the gods, Asgard. Loki (Tom Hiddleston, who, next to Robert Downey Jr., has proven himself to be a Marvel MVP: Most Valuable Performer) is locked up in another of those glass-walled prison cells we see so often these days.

He’s also reunited with Dad (Odin, played by more-shouty-than-ever Anthony Hopkins) and Mom (Frigga, the awesome Rene Russo). Frigga still has affection for her adoptive son, Loki, despite Loki’s crimes over two movies, but Dark Elf Malekith (Christopher Eccleston), whose plans for universal destruction put him at odds with Asgard, is going to make lots of trouble for our royal family and force Thor and Loki into being uneasy allies. And much of this has to do with Thor’s earthling girlfriend Jane (Natalie Portman) stumbling across the dimensional portal and becoming infected by Aether, a nasty Macguffin the bad guys need for their dastardly intent. Funny that even though this Aether stuff was supposed to be under lock and key, Jane so easily was able to stumble upon it.

But you don’t want to pull too enthusiastically at these plot threads or the whole thing will unravel. Especially in the first act set-up, which is too dense, too full of holes, and structurally suffers in comparison with Peter Jackson’s Lord Of The Rings: The Fellowship Of The Ring, which it seems to be aping.

Thankfully, we do get to spend time with a charming supporting cast, including Jane’s colleagues Darcy (Kat Dennings, welcome comic relief), Erik (Stellan Skarsgaard, whose unfortunate opposition to pants is revealed) and new intern Ian (Jonathan Howard). On the swords-and-pointy-bits side, we have Heimdall (Idris Elba), Sif (Jaimie Alexander) and the Warriors Three (Tadanobu Asano, Ray Stevenson and Zachary Levi). Someone needs to give those folks their own movie—they help a lot to deliver the fun in what might otherwise be a cluttered and confused tale. And as a mortal suitor of Jane’s, Chris O’Dowd also has a quality moment or two.

By the second and third act, when the action set-pieces really start to manifest, Thor: The Dark World finds a rhythm. Underneath layers of Evil Elf pancake, Eccleston seems completely bereft of personality, which is a shame, but fortunately Hiddleston is there to inject his special chaos into the proceedings. The kind of depth Whedon brought to The Avengers is largely absent—the death of a supporting character here has next to no emotional impact. And I also missed the presence of series glue Phil Coulson and/or any agent of SHIELD—I guess we’ll have to rely on the TV series for that. I like the show, but the schism between big and small screen is too bad.

Overall, though, I had a good time at Thor: The Dark World. That sense of movement I mentioned above, that momentum, it took me through a reasonably entertaining two hours. I doubt anyone who’s been on the ride thus far, seen the previous collection of movies and enjoyed them, will have too much to complain about how it goes here.

Oh, and stick around through the credits for not one, but two, key extra scenes, wrapping up what’s been going on here and deftly setting up events to take place in Guardians of the Galaxy, yet another forthcoming Marvel feature film event.

It’s their universe, we’re just living in it.