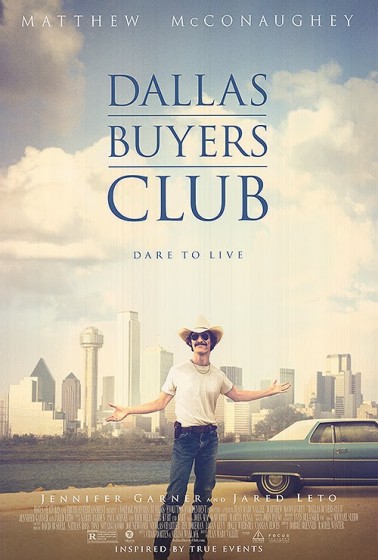 Dallas Buyers Club is a moving gallery of gaunt, desperate faces. At its fore is Matthew McConaughey’s, an actor who in the past two years, with sterling work in films such as The Lincoln Lawyer, Bernie, Killer Joe, Magic Mike, and Mud, has turned his career around. He’s gone from being a guy known for taking his shirt off in romantic comedies to an edgy, unpredictable performer in quality indies. A return to form, then, for the actor who most first noticed back in Dazed And Confused.

And this is the pinnacle of his career for a lot of reasons, the first being his physical commitment: He’s received plenty of attention for the transformation, having dropped 45lbs. off his already narrow frame to play Ron Woodroof, a sometime electrician and rodeo bull-rider and all-time gambler and partier who in the mid-1980s was diagnosed with full-blown AIDS and given a month to live. He reads up on the the first efforts to control the epidemic and, a born hustler, isn’t satisfied with the measures the FDA have approved. Finding a source (Griffin Dunne, good to see you again) of a slew of other medicinal treatments down in Mexico, he imports them, starting up the club of the title, providing some hope and comfort for an underserved community of HIV positive and AIDS sufferers in Texas.

Beyond the startling way he changed his body, McConaughey grabs hold of this role with both hands. Woodroof is slightly unhinged, wildly homophobic and living life in the margins when we first meet him, but his illness forces him to focus all that rampant energy, first towards the task at hand: extending his own life, then protecting his growing business, and finally, when he really sees what’s at stake, representing a community of people who’d been forsaken by their own government and sold out to Big Pharma. It’s a great and compelling arc.

He also has a lot of help. A typically wholesome Jennifer Garner shows up as a local doctor who slowly sees how AZT, a drug repurposed as a way to help AIDS patients, doesn’t really do much to extend their lives. But her white-hat style contrasts nicely with McConaughey’s chaos. Steve Zahn has a nice supporting role as a friendly cop who intercedes on Woodroof’s behalf from time to time. But the most surprising performance is from Jared Leto, who steals every scene he’s in like someone spliced together Johnny Depp and Rooney Mara, playing Rayon, a gorgeous trans person who helps Woodroof find customers in the Dallas gay community. Leto has always been pretty, and here, all gussied up and missing his eyebrows, he puts those looks to good use in a subtle, lovely performance.

Lastly, I want to give full marks to the director, Vallée, whose last film was Cafe de Flore, which I thought was the best film of 2011. Here his gritty and graceful storytelling propels the story forward in a way that never feels less than authentic. There’s plenty of hand-held camera, but it’s never distracting, and I especially liked the sound design, which uses electronic whines to help communicate some of the discomfort and fear Woodroof is feeling.