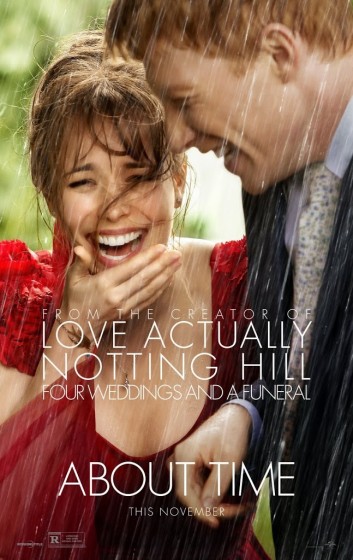 Written and directed by Richard Curtis

I’ve very much enjoyed your work. Especially your writing, going back to Blackadder, The Tall Guy, Four Weddings and a Funeral, Notting Hill and The Girl In The Cafe. Your style is so identifiable—foul-mouthed and hilarious middle-class-to-posh Brits, bumbling, awkward leading men, bland American women, and a great supporting cast who are usually more interesting than the leads. When you decided to become a director with Love, Actually, well, there was a lot to like in that film, though it was pretty syrupy, too. Teeth-achingly so. We both know this. But it’s become something of a Christmas movie staple, and I can see why. Sweet is good at the holidays. And then there was The Boat That Rocked, known as Pirate Radio over here. Unfortunately, it was all syrup and no meal.

Now we have About Time, which you’ve indicated may be your final directorial effort. I think that’s fine. Don’t stop writing, by any means, but I don’t think your stories are best served with you helming your own scripts. You see, while I found there were things about this new one to enjoy, there was also a real lack of thought about some important details. Maybe another director would have been more careful about that.

And, from here in, I should warn readers peeking in on this correspondence that there’s going to be some mild spoilers coming up.

To wit: Your faffing ginger lawyer Tim (Domhnall Gleeson) discovers he can travel backwards in time and into his own body earlier in his life. Men in his family can do this, explains his father, played by the always reliable Bill Nighy. (I’m so glad you keep casting him in your work.) The first thing Tim wants to do is get with girls. So he redoes an awkward New Years Eve, and then tries to score with the a friend of his sister—which doesn’t work too well. Time travel ain’t no magic pill.

Good so far. I’m glad we’re discovering the limits of this gift. But the rules are a little weird. First off, if Tim needs to go into a closet to go back in time, and he emerges from the closet in the past, what happens to his body that was already existing at that time? Does it just teleport into the closet? And once he’s made the change to the timeline, does he just go through the paces, reenacting the past as he did before until he’s in the present again? Or can he travel forward in time back to the moment he left? The latter seems to be the case, but it’s not entirely explained.

Kind of amazing that your movie doesn’t satisfyingly explain these details, Richard. Admit it: you don’t really care about this stuff, do you? Like, at all. Because time-travel is really just a way to illustrate your point about appreciating life. Right? Well, fair enough, but shouldn’t you care just a little more than you do? Because a certain amount of internal logic is necessary, I’d argue, in these kinds of things.

OK, so the first part of About Time is about Tim figuring out how to make someone fall in love with him by going back in time and subtly manipulating events. So far, so… well, kind of weird. Tim’s choice is one of your standard bland American women, Mary, played by the usually pretty spunky Rachel McAdams. Mary’s distinguishing characteristics are bad hair and frumpy wardrobe and a fascination with Kate Moss, of all people. It doesn’t make her terribly compelling. But Tim is all over her, and things do go well.

After that, the movie explores the price to pay when you change things by time-travelling, but really it’s about family, especially fathers and sons. The romantic stuff is sort of tossed aside. And again you mess with your ill-defined rules: You have a woman time-travel even though you’ve already told us it’s only the guys in the family who can do it. You establish that you can’t travel back before a child is born to the traveller—which is a weird little twist, but whatever—and then you break that rule, too.

But this is the most egregious problem, dude. Tim never tells his beloved Mary about his ability. This is the mother of his children. It’s this omission that makes his behaviour go from kind of weird to totally, unpleasantly creepy. I get that the story is about him realizing he doesn’t need to use his gift, he just needs to appreciate every day as he lives it. But he and your script makes his leading lady into a footnote in favour of Tim’s relationship with his father.

Look, I won’t deny a lot of stuff is affecting, and there are plenty of laughs. Again, the casting is strong. And the warmth of the story did stay with me as I was thinking about the film afterwards.

But, I’m sorry to say, Richard, those problems that I mentioned, they stayed with me, too. And, so, I haven’t been recommending your film to people.

All the best! Will look forward to your next project.