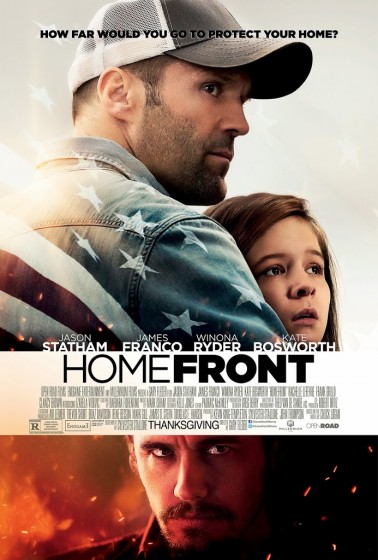 Yeah, you read that right: Sly Stallone is responsible for this script. According to The Hollywood Reporter, Homefront was at one time imagined as a closing chapter of his Rambo saga, presumably telling the tale of John Rambo’s return to the US to fight redneck assholes.

Instead of a former military man, we have Jason Statham as an undercover DEA dude named Broker who heads out to the bayou to give his daughter (Izabela Vidovic) a taste of the rural life, but, of course, HE CAN’T ESCAPE HIS PAST. What we have here, folks, is a sour, miserable little exploitation drama that reminded me of nothing more than a Charles Bronson vigilante picture. And not one of the good ones. If you want to see Statham crunch some bones, there is that, but not a whole lot else to recommend it.

Big problem number one: James Franco plays the villain, an edgy guy named Gator, and he isn’t a very convincing. He needs to intimidate to be any kind of a match for the hard-as-nails Stat. And while he managed weird and scary in this year’s Spring Breakers, he’s not up to it here. Gator is a crabby drug dealer who wants to expand his operation beyond his little pond, but has to deal with his tweaker sister (Kate Bosworth, convincingly strung out) and nephew, the school bully getting his head handed to him by a little girl in his class, who also happens to be the daughter of single dad Broker.

Big problem number two: Right away, I notice some fairly egregious logic and continuity problems. Why does a certain dude reach for a gun when he already appears to have one in his hand? What is it Broker is doing out in the swamp to make a living? And why, exactly, does he have a British accent? How’d he end up in Louisiana at all? And what is Clancy Brown’s sheriff doing in this movie besides growling pointlessly?

Big problem number three: I’ve always liked Winona Ryder, but she’s just got too much class to convince as a trashy goth meth moll. As Gator’s girl, she brings in the big-time cookers, hoping to strike a distribution deal with them while serving up Broker’s location as an act of good faith. Things don’t go that well for a couple of reasons we all can figure out: never trust evil biker meth-heads looking for revenge on undercover cops, and never cross The Stat, who keeps a case (unlocked, ‘natch) of high powered weaponry under his bed.

All of this is serviceable, and I can’t deny some satisfaction in watching Statham exercise his physical gifts on those who dare threaten him and his daughter. But this self-serious violent fantasy, with not even a moment of fun to be had, and way too much time spent with the sleazy, sweaty criminals, left me feeling pretty glum.