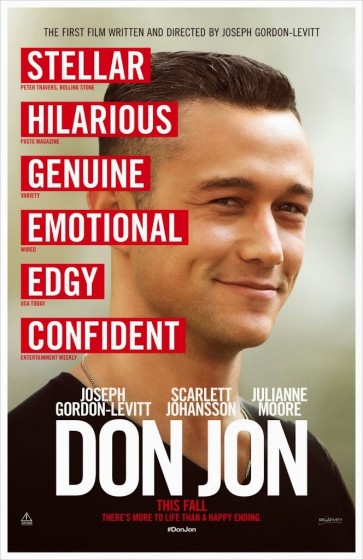 Written and directed by Joseph Gordon-Levitt

Full marks to a first time feature filmmaker who writes and stars. Joseph Gordon-Levitt, already a performer with cred in blockbuster (The Dark Knight Rises, Looper) and indie ((500) Days of Summer) films, now can count director among his abilities. And he starts smart, with this fairly modest character study. And the script? Well, I suppose if I was a fan of Jersey Shore, I might have enjoyed it more, because the titular character is a guido—to use the politically incorrect lingo from that annoying TV phenomenon—a complete Italian-American stereotype. Jon isn’t easy to spend 90 minutes with, but then, I suppose, neither was Tony Manero. But let’s not get confused here: Don Jon has little of the epic ambition of a Saturday Night Fever, even though it feels like it’s set in a similar world.

Enter Barbara (Scarlett Johansson). She’s “a dime,” according to Jon and his wingmen, a 10 on a scale of 10, in other words. But she’s not looking for a hook-up, she wants a serious guy… who’ll do exactly what she wants. She starts putting Jon through changes right away, which he’s happy about since he’s horny and smitten. He even invites her home to meet his folks, Jon Sr (Tony Danza, a bit of a cartoon) and Angela (Glenne Headly, who I haven’t seen since… Dirty Rotten Scoundrels?), and sister Monica (Brie Larson), who has maybe two lines in the whole movie because she’s always on her smartphone.

My major problem with the film is Jon himself: he’s a loud, aggressive, road-raging, lying asshole. It’s hard to warm up to him and the script, in the first act, anyway, isn’t really a comedy or a drama—it veers dangerously close to sitcom-land. Some of the set-pieces show a lack of directorial imagination; I was starting to think there was something wrong with Danza’s legs since his every scene has him sitting at the dinner table. But maybe that was intentional. There is plenty of zippy and creative camerawork to keep the story moving, and some clever ways—set-up repetitions, especially—of showing the limitations of Jon’s routine. Also, Gordon-Levitt’s commitment to the character is 100%, and he gives Johansson one of the best roles she’s had in ages.

Don Jon threatens to be about the hypocrisies of modern males, how our media distractions mess with our relationships, even the lack of connection in the church, but while those themes are touched upon, the film chooses to be mainly about Jon’s discovery of real intimacy as he starts to recognize his deeper problems and break out of his comfort zones. And that’s OK—I think the film’s ambitions work better set to medium. But only Gordon-Levitt’s natural likability make Jon bearable, because his character growth comes pretty late in the running.