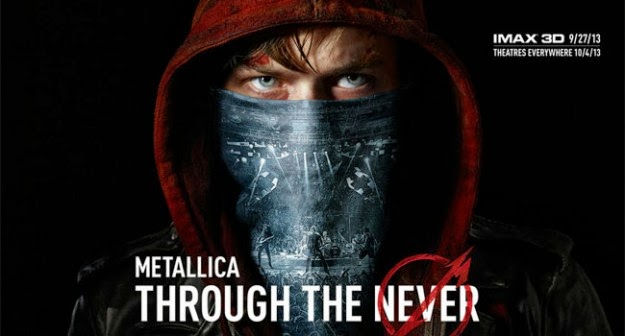 Nine years ago Metallica starred in Some Kind of Monster, which, in the history of rock music, gets my vote for the most revealing look inside a band dynamic. Whatever mystique they might have had, it was demolished by the metal godfathers’ display of neuroses and childish behaviour. They came off like particularly dysfunctional teenagers. Through The Never manages to rebuild at least some of their cool thanks to the big sound at the local IMAX, Antal’s prowling cameras and Metallica’s on-stage performance, honed by years of experience.

I can’t deny the band has earned their place as the most popular band in their cohort. For 30 years they’ve been unleashing a thundering, world-crushing sound on nine studio records. And they’ve sold more than 100 million of those suckers. A lot of their appeal has to do with how they commit in their live shows, as communicated in Through The Never for about 75 percent of the running time. This is the good stuff, where we get to enjoy Hammett, Hetfield, Trujillo and Ulrich posing, stalking the stage, playing their instruments with an uncanny skill, and deftly avoiding Stonehenge-esque props—like floating electric chairs—and staged lighting rig accidents. Also good; the setlist is pretty heavily weighted to their hardcore early material like “Battery,” “Hit The Lights” and “One”and less from, for example, their recent Lou Reed collaboration, Lulu.

The other 25 percent, or so, is a slight narrative about a roadie, Trip (Dane DeHaan), who, while trying to locate a truck stalled somewhere in downtown Vancouver, stumbles upon an apocalyptic street war. There’s really not much of a story here, but it does provide a kind of Metallica thematic primer. Trip is independent and clear-eyed—while still a pill-popper—stuck between demonic, violent and unjust societal forces, just like the perspective in most Metallica songs. He’s got a terrific work ethic and a job to do, one he doesn’t really understand. When cornered, he’s ingenious, prepared to immolate himself and wield a city-destroying hammer to defeat faceless, mounted death, all for the sake of a macguffin required by the band. Would any true Metallica fan do any less? It may feel like an extended music video, but it does get to the core of what the songs are all about and what it means being a true believer.

Overall, Through The Never delivers the thrills and theatre of a Metallica concert experience, for only $17. Sounds like a deal to me.