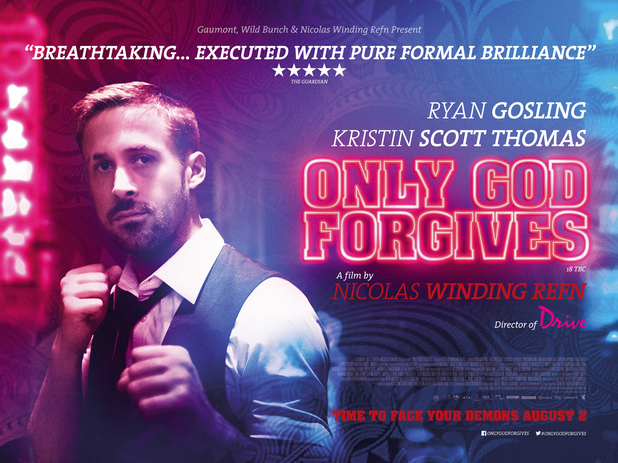 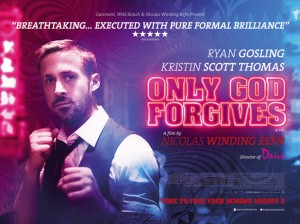 Only God Forgives is a bloody and relentless operatic noir set largely in nighttime Bangkok, bathed in neon scarlet, emerald, topaz, and gold. Imagine a film conceived by Gaspar Noe—he’s thanked in the credits—written by David Lynch circa Lost Highway, and directed by Stanley Kubrick somewhere between The Shining and Full Metal Jacket, and you’ll have a rough idea what to expect from Refn’s new project. But also imagine a film slavishly devoted to the styles of those directors while often feeling hollow, shallow, an empty joke—all those stunning visuals seemingly in service of only themselves. It’s a formalist exercise that may not actually mean anything much at all. Can you enjoy what is there anyway? I did, but not everyone will.

For starters, it’s brutally violent. Ryan Gosling plays Julian, a typically taciturn—typical for Gosling of late, anyway—guy who runs Thai boxing and drugs in Bangkok with his brother, Billy (Tom Burke). Billy rapes and murders a 16-year-old. The cop on the scene, Chang (Vithaya Pansringarm, a great, chilling villain) allows the girl’s father to take his vengeance, but punishes him after. The cycle of retribution continues as Julian and Billy’s mother Crystal (a shockingly against type Kristin Scott Thomas) appears on the scene, browbeating Julian for not doing anything to avenge his brother while launching her own avenging agents.

Scott Thomas feels like she’s channelling an off-her-meds Angelica Huston from The Grifters, complete with blonde wig and even more absurd Freudian overtones. Through her performance, an argument could be made Only God Forgives is the blackest of comedies. Gosling has two expressions, probably one more than the character requires. This is the first time in awhile I had the feeling anyone could have played a Gosling role. He and Refn clearly wanted a bit of a cypher, silently struggling with right and wrong, and they got it.

As with Refn’s other films—Drive, Valhalla Rising and Bronson, to name the three most recent—he shoots long, still sequences, scenes gorgeously and deliberately framed, tracked and edited, with Cliff Martinez returning to provide a hypnotic electronic score. As a cinematic storyteller, Refn has few peers these days, so anyone interested in the structural details of moviemaking shouldn’t miss this: it’s one of the year’s most interesting and visually dynamic exercises.

But beyond that, what more is there to it? Thematically it recalls traditional noir and Greek tragedy, but does their mixing generate much that’s new or worthwhile? I’m going to need a bit of time to marinate on that. Those seeking a stylish noir or a grim revenge thriller might find it too deliberate. Those seeking an art house drama might find it pointlessly nihilistic.

I don’t have a horse in this race. After having watched Bronson, it seemed perverse to me that anyone would have bothered to make a film about that guy. But in the days following, the imagery in the film and sheer pigheadedness of the lead character, Britain’s most notorious inmate as played by Tom Hardy, kept playing through my mind. The film insinuated.

Eventually I had to admit, it got to me. The same might happen here. I’ll get back to you on that.