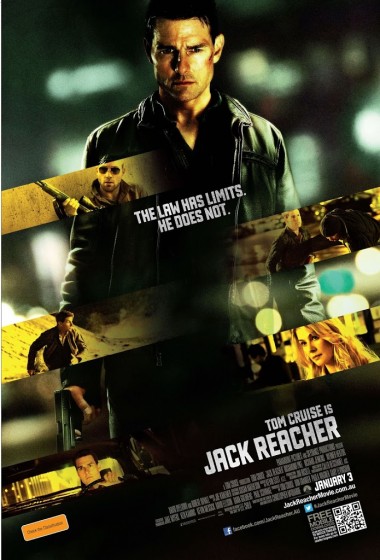 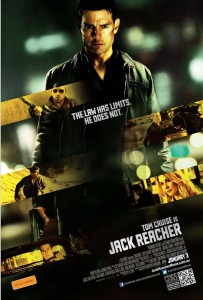 Directed and written by Christopher McQuarrie, adapting the Lee Child book, One Shot.

A sad coincidence, I suppose, that I’m writing about Jack Reacher today, and earlier I heard of the death of Michael Winner, a British director who was responsible for a number of thrillers and action movies of the 1970s, movies Jack Reacher is directly indebted to. I’m talking about the Charles Bronson pictures The Mechanic, The Stone Killer, Death Wish and Death Wish 2, as well as Scorpio, Firepower and The Big Sleep.

These movies required “tough-guy actors,” few of whom we have in today’s cinematic landscape. Maybe Jason Statham could be counted in this number, Liam Neeson or Daniel Craig. There’s some sense of gritty authenticity there. But muscle cars made flesh, guys like Bronson, Clint Eastwood, Lee Marvin, Lee Van Cleef, James Coburn, Robert Michum? We don’t see their type much anymore.

Which is too bad, because that’s what Jack Reacher needs. And that’s not to say star/producer Tom Cruise isn’t without physicality—his work on Mission: Impossible – Ghost Protocol was particularly impressive—but it’s just a little hard to take him seriously in this kind of role. He’s not imposing. He’s not terribly dangerous. He’s not grizzled. He doesn’t have a way with a one-liner. And, despite being 50, he still looks boyish and clean-cut. Beyond that, Tom Cruise has also been painted with the enormous brush of celebrity, which, for better or for worse, makes it hard to find him plausible in some parts.

All that said, Jack Reacher still feel like a movie from another era, in a good way. It’s got the hard-boiled edges and long sequences of suspense, perforated by short, shocking moments of violence. It’s an urban story with plenty of nighttime sequences in an identifiable Pittsburgh—great use of locations. It goes interesting places and demands more of the audience than you expect. But you’ve got to believe Tom Cruise in its centre, which may be the most demanding thing of all.

Cruise is the eponymous Reacher, and I gather he’s very unlike the character from the novels, which is fine for me since I haven’t read any of them. He’s a former military police officer, having seen plenty of action overseas. Coming back to the States, he vanishes. He’s off grid and isn’t interested in being found. Except a guy he served with is accused of murder, of having sniped five civilians. And maybe he didn’t do it. The DA (Richard Jenkins) thinks he did, as does the cop (David Oyelowo), though the DA’s daughter, Helen (Rosamund Pike), an attorney representing the accused, might be convinced otherwise. She and Reacher look into the possibilities, which leads them to a lot of bad men, including a fellow called The Zec (Werner Herzog!) at the end of that long list.

McQuarrie, best known for having scripted The Usual Suspects, has a talent for creating this world of noirish compromise and keeping the pacing taught, even over the two-hours-plus running time. The introduction of a gun expert (Robert Duvall) in the third act is a bit of a stretch, as is the role he winds up playing in the final, inevitable action sequence.

But, by that point, you’re either on board with the movie or you’re not. You’ll need to believe that Reacher would pull a Mel Gibson-in-Lethal Weapon move, toss away a firearm and engage a particularly nasty customer in hand-to-hand combat, even though there’s still an innocent in danger. You’ll need to believe his unearthly accuracy with an assault rifle, despite being “rusty.” And you need to go along with Reacher as a borderline superhero, a relentless, hardcore dude, more or less. And it’s outrageous, but it’s also a lot of fun, so I went with it.