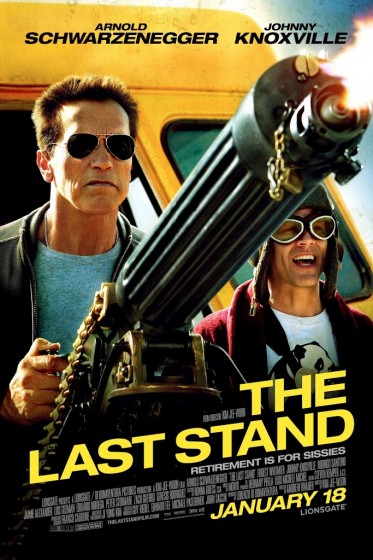 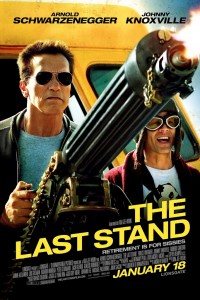 Once upon a time, action movies were different. In the 1980s, the guns were big, the explosions were big, the heroes were big, but CGI and superheroes weren’t yet king. The star was still the biggest part of the deal: Sylvester Stallone, Kurt Russell, these were the guys who people turned out to see. But Arnold Schwarzenegger was the biggest. He was his own industry. Everyone remembers Conan and Commando, The Terminator and Predator, but he was also in lesser pictures few recall, like Red Heat, Raw Deal and The Running Man. The Last Stand feels like one of those, with the added irony that we know it’s one of those. The filmmakers don’t feel it necessary to explain to audience why this guy with the broad Austrian accent is in America. We know why. Because it’s Schwarzenegger.

He’s Ray Owens, sheriff of Sommerton Junction, AZ. We do hear how he saw a lot of death when he was in the Los Angeles Police Department, but a few years back he took a job in this one-traffic-light border town.  He’s got a small staff (played by Jaimie Alexander, Zach Gilford, the inimitable Luis Guzman, all of whom get a chunk of screentime), the town is quiet, and he likes it like that. The only noisemakers are local gun nut Lewis Dinkum (Johnny Knoxville, doing his own stunts), a troubled ex-Marine (Rodrigo Santoro) and the cranky dairy farmer (Harry Dean Stanton, who I’ve happily noticed has been working a lot lately).

Yes, this is a western.

While being transferred to a federal pen in Las Vegas, Mexican cartel bigwig Cortez (Eduardo Noriega) breaks out, with the help of his gun-happy thugs. It’s a great sequence, with one amazing camera move as we follow four zip-liners in the air, then we’re down on the street amongst the SWAT team. FBI Agent John Bannister (the always professional Forest Whitaker) gets to be impotent and pissed off as the bad guy easily eludes him into the desert night.

Climbing behind the wheel of a high-powered Corvette, Cortez high-tails it for the border, where another group of his flunkies—led by perennial weirdo Peter Stormare—are making sure he’ll be able to get home, right through Sommerton Junction.

It’s been awhile since I’ve seen a film with such blatant automotive fetishization. The Corvette—as well as a brand new red Camaro playing a part in the third act—are dead sexy, and we spend a lot of time with them. General Motors got their money worth.

As you might expect, Schwarzenegger gets to let fly with a lot of one-liners, he gets to shoot a lot of thugs, crash through a door, beat the crap out of a few people, and ignore the pain of being stabbed repeatedly. (Even though the camera lingers on a bloody tissue, as if to say “he’s hurt much worse than he’s pretending”, nothing comes of that: despite admitting to be “old,” Ray Owens is as unstoppable as any of Schwarzenegger’s heroes from two decades back.)

He also gets to act a little, in a scene where someone dies. And, interestingly, he gets to play the straight man opposite the wackier cast members (Guzman and Knoxville), bringing a little Eastwood old-man-grumpiness to the role, though he does have a few choice lines himself, including a great gag about immigrants late in the running.

A friend I saw the film with remarked on the way out that this was a good starter project, to get Schwarzenegger’s name back above the title of a major release. That’s a fair assessment, but it’s more than that. The movie is a genuine throwback to a kind of action movie we haven’t seen much of for years. There’s actually some characterization and story here. The camera lets the cast do a lot of the heavy lifting. The editing is restrained. Sure, it devolves into a bloody cartoon, but for those with nostalgia for this kind of thing, or for fans of Schwarzenegger in particular, you’ll find stuff to enjoy. 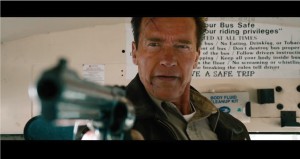