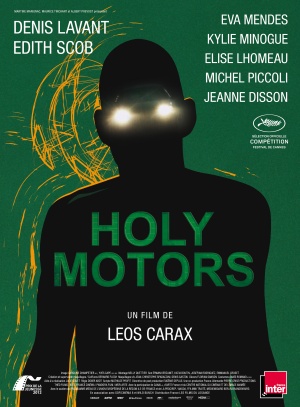 “Was so discombobulated after Holy Motors I couldn’t continue on to Chained,” tweeted one of my fellow audience members at the Oxford showing last night.

I know how she felt.

Holy Motors is the new film from French director Leos Carax, and its damn hard to summarize. We start with black and white vintage stock footage of a naked man running. Then we’re seeing people in a movie theatre watching a movie. Then we join a man waking up at night in a hotel room to the sounds of a dockyard, seagulls and boats and water. The camera tracks him as he walks around the room. He uses his a finger in the shape of a door handle to open a space in the wall. Then he’s in the movie theatre. Then we meet a middle-aged man who lives in a sprawling modernist home. His children wish him a good day at work as he gets into an enormous stretch limo. His silver-haired chauffeur tells him he has nine appointments. He goes from appointment to appointment, all over Paris, changing his appearance, using costumes and make-up, adjusting his identity in his moveable dressing room. He’s a performer, playing for an audience he never sees. I started to imagine him as the personification of theatre, immortal and tragic—as well as frequently comic.

But I don’t really have any sense of the filmmaker’s intention. It’s fun watching something that’s so purposely obtuse. And, in fact, as plot points began to coalesce, becoming less stream-of-consciousness, the film becomes less interesting. But Holy Motors does include a few jaw-dropping visuals, my description of which will do you no good. But if you do catch this movie somewhere, prepare for the section where our hero (Denis Lavant) transforms into a monosyllabic troll and kidnaps Eva Mendes in the grounds of Paris’ spectacular cemetery Pere Lachaise, as well as Kylie Minogue’s musical interlude.

There are a number of movies showing tonight that look good, but I have to say I’m drawn to the Quebec drama Inch’Allah because Evelyn Brochu will be here for the screening. She’s in the film, and last year I was wowed by her in the amazing Cafe de Flore.

But there are a lot of parties tonight too. Total #firstworldproblem, eh?