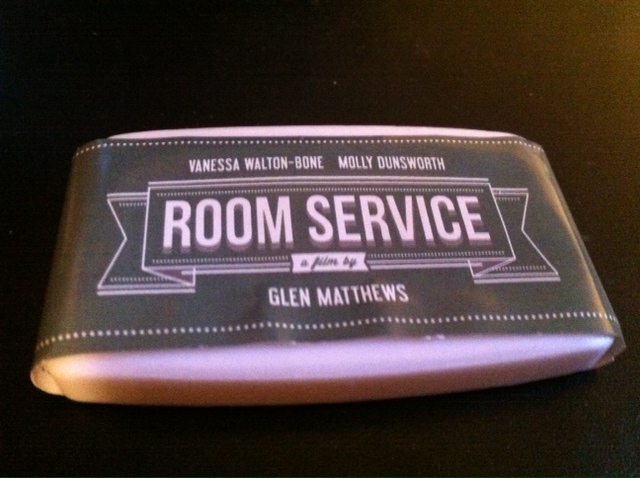 September 14, 2012 flawintheiris
The AFF opening night party is always a blast—even when the heat makes for a human stew, as it did at last year’s venue. Last night’s edition did not disappoint. Big kudos to the organizers who had the food and free cocktails—champagne followed by rye and ginger—running all evening. The site, the cavernous Cunard Centre, provided plenty of space to wander around in and there were precious few line-ups at the bars.
I had a number of illuminating chats, including one with Hobo With A Shotgun screenwriter John Davies. Though I’d understood that his, Rob Cotterill and Jason Eisener’s next project was to be a high school kung fu actioner, he says that didn’t quite get off the ground, so now they’re working on a Hobo spinoff script exploring the origins of the terrifying masked mercenaries in that film. It will be called The Plague.
I also learned that a third Trailer Park Boys film has the green light. They hope to go to camera on October 1. No word yet on what kind of trouble the Boys will get into this time around.
Big props to Glen Matthews for the most unique marketing tool for his short film Room Service: 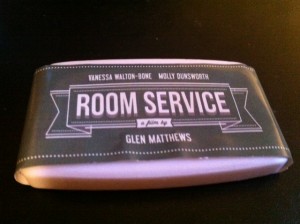 Yes, that is a bar of soap.
There was no live musical act at the party this year, which was fine, but what continually surprises me is the volume of the DJs at these parties. Though I know I risk sounding like a fogey here, a note for future reference: This is a cocktail party. People attend in order to schmooze, not to rave or dance. I mean, maybe by midnight you might get a few lubricated shimmiers, but generally, if you have to shout in someone’s face, the music is way too frikkin’ loud. Maybe consider getting a mellow jazz band in the years to come.
Those who went to see opening night movie An Angels’ Share reported a lighter, looser side to famed realist Ken Loach, though I gather the characters’ dense Scottish burr left many straining to understand what was being said. Though I wasn’t able to be there, I also heard reports from more than one person that the gala at the Oxford was not nearly full. Maybe they’d have been better opening the Atlantic Film Festival with The Disappeared, a locally made feature. 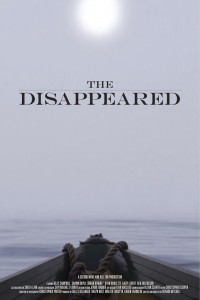 My thoughts on that film, which screens tonight:
Shandi Mitchell is a novelist (Under This Unbroken Sky) who’s worked for years as an assistant director on film sets, from Margaret’s Museum to Growing Op. She didn’t choose an easy first feature to write and direct— logistically speaking—the story of six men adrift in two dories, all shot off the coast of Nova Scotia near Lunenburg. Tales of crew members falling into the sea and cast members contracting pneumonia did drift up the coast last year during the shoot.
In one way this is a story that could be done on a theatre stage somewhere: you have a cast of six: Billy Campbell, Shawn Doyle, Brian Downey, Ryan Doucette, Gary Levert and Neil Matheson and a single location, the vastness of the North Atlantic. So the filmmakers’ task is then to show the passing of time through changes in day and night, wind and rain. What I found impressive was that with only a couple exceptions, the continuity of light and weather change was seamless. You feel the passage of time and the very real presence and changeability of the ocean. Much credit can go to cinematographer Christopher Porter and editor Chris Cooper for their fine work on this.
And Mitchell’s cast is excellent, each with his own arc. I especially enjoyed Campbell’s effortless charisma, Shawn Doyle’s authentically Newfoundland sense of humour, and Downey’s earnest crustiness. And if the ambiguous conclusion makes the endeavour feel like one of Samuel Beckett’s lesser-known works, I was OK with the existential vibe. I liked being in the boat with these guys and observing as they come apart, their predicament peeling them down to their essential selves.
“What are you going to see?” is this year’s AFF tag line, and in the past few days it’s a question that’s been asked of me many times. Here’s my list of features I want to see. (Please check out yesterday’s post for a link to The Coast, with reviews and stories on the movies I’ve already seen, including the excellent Stories We Tell and A Royal Affair.) Of shorts, any and all the programs I’d recommend.
Keep in mind, my schedule, day job and other complications could quite easily upturn this ambitious and idealized list of screenings. Plus, I recognize that some of my picks are scheduled opposite each other, so I’ll have to make that call on the day. (Sigh.) But anyway, here’s my wish list in the order in which they’re screened, for those of you who are interested.
Sleepwalk With Me
A Liar’s Autobiography – The Untrue Story of Monty Python’s Graham Chapman
Lowlife
Holy Motors
Mars And April
The Ambassador
Inch’Allah
Grabbers
The End of Time
Inescapable
Replicas
Love Is All You Need
Charles Bradley: The Soul of America
Antiviral
Searching for Sugarman
Revolution
Love
Smashed
The Hunt
Iron Sky
Rust & Bone
West of Memphis
The ABCs of Death