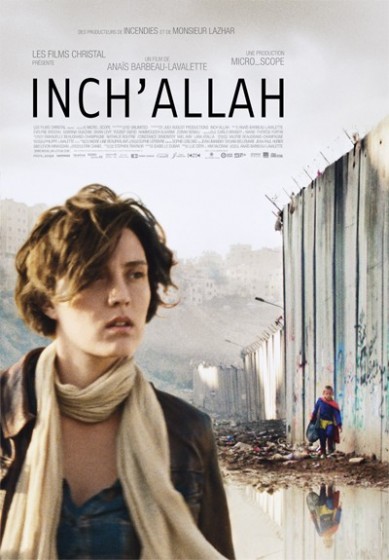 The past couple of years that I’ve been attending the Village Sound Party, hosted by Jason MacIsaac and his colleagues, have been very good times. Their studio space and backyard crammed with film and music people, a live band or two along with flowing beverages and plates full of sushi make for a seriously convivial atmosphere, a cross between a more formal industry party and a north end kitchen shindig.

In order to make it in time for the start of Anais Barbeau-Lavalette’s Inch’Allah at the Oxford I had to leave early (though it did mean I missed the big rain). Midnight’s Children, Deepha Mehta’s cinematic take on Salman Rushdie’s 1980 novel, was late getting out so there I was, hanging on the red carpet with Inch’Allah’s lead, Evelyne Brochu. If you’ve been a regular reader of this blog you’ll know how big a fan I was of a film that appeared at last year’s Atlantic Film Festival, Café de Flore, in which Ms Brochu had a big part. In person I found her to be delightfully self-effacing, and even a bit nervous to be here, her first trip to Halifax and representing the film without the director who is eight-months pregnant and recovering from TIFF.

Brochu and I talked about TIFF, how she and Barbeau-Lavalette wound up giving their tickets to the screening of PT Anderson’s The Master to a couple in the rush line when they decided the whole scene was too crowded and crazy. We talked about shooting in Jordan on Inch’Allah because there’s no way they could get insurance to cover a shoot in the West Bank—though they did a day in Jerusalem and a day in Tel Aviv—and how much she enjoyed meeting all the Jordanians, Iraqis, Israelis and other international expats in the crew and cast. We talked about Guy Delisle’s Jerusalem. And, yes, we did talk about Café de Flore, and how all the tattoos on her body were fake, designed by director Jean-Marc Vallée and his art department, but she loved having them. She went to a club one night still wearing them and said she felt “badass.”

And, turns out, Brochu’s brilliant in Inch’Allah. She plays Chloe, an obstetrician working in the West Bank, spending her evenings in a Jerusalem apartment with a friend, a young Israeli border guard (Sivan Levy), and her days with a Palestinian family. Among them is Rand (Sabrina Ouazani), angry and pregnant—the father of her baby is in detention. Rand spends her days sifting in a garbage dump while her brother Faysal (Yousef Sweid) is more actively militant, printing political posters at his copy shop. As the film opens on a cafe bombing, we wonder: Is he into more than that?

The set-up, offering this obviously balanced outsider perspective, could be dangerously precious, but any concern of that is quickly scuppered by the authenticity in the docu-dramatic filmmaking. The performers and sense of place is flawless. People suffer, children die but life just keeps on going for these displaced people.

Much hangs on Brochu’s empathic performance. Where in Café de Flore she was tough but with a sweetly innocent quality, here she’s tired and more than a little damaged, every injustice and hardship she witnesses registers on her face. There’s a real question of what she’s prepared to do, how much she believes in the family’s cause. And while I found the final 10 minutes or so of the film crossed a line in plausibility—I didn’t quite believe she would do what she does, despite all she’s seen—I believed the story largely because Brochu is so honest in her role. Powerful stuff.

Another quality Nova Scotian feature is showing this evening. Blackbird is a sharp, assured debut from writer-director Jason Buxton, the story of a teen (Connor Jessup) whose goth attitude and casual online threats upset a small town and get him thrown into juvie. The film examines the monochromatic teenage morality as it butts up against adult compromise and the vagaries of a court system where the right and wrong of it doesn’t figure. Jessup is compelling and sympathetic, while the film undercuts any threat of afterschool specialness with grounded performances from its pretty young stars and a subtle, effective production design: this is a very good looking and sounding picture. And while the narrative arc wanders a bit in the third act—I didn’t care nearly as much about Trevor as I did about whether Connor and Deanna would work it out—the lasting impression is of a solid effort from a talented filmmaker just getting up to speed.

Also looking forward to The End of Time in—yikes—a little over an hour. Gotta get moving…