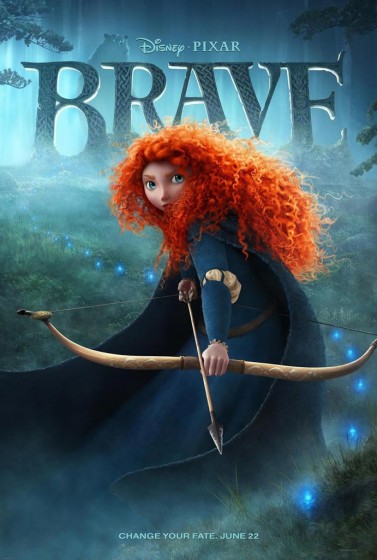 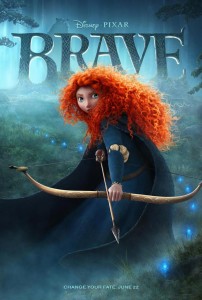 Directed by Mark Andrews, Brenda Chapman and Steve Purcell
Written by Andrews, Chapman, Purcell and Irene Mecchi, from a story by Chapman

If you’ll excuse the mixed metaphor, the multitude of cooks in the writing pantry along with tales of changing horses in mid-race in the directorial department brought atypical negative buzz to this Pixar joint in advance of it opening. I was pleased to find that, if not as complex and engaging as Pixar’s non-Cars and -A Bug’s Life related output, it’s still a charming and fun-filled family film.

The excellent Kelly MacDonald (Trainspotting, No Country for Old Men, Boardwalk Empire) voices Merida, the daughter of a highland chief Fergus (Billy Connolly) in ancient Scotland. Her mother Elinor (Emma Thompson) has plans to marry her off to one of the royal sons of the other local clans in order to keep the regional peace. A willful young lady, Merida doesn’t think much of this plan, especially as she’s a capable archer, rider and climber. She doesn’t have much need of a man around.
So, she’s especially peeved when three clans show up to present their heirs, prompting her father’s stories of a killer bear that took his leg. Looking for a way to change her fate, Merida heads out into the woods, finding a witch whose potions have a transformative effect on members of her family, though not the change she was hoping for.

People have been saying that this is Pixar’s first film that speaks to more conservative values of traditional Disney animations, encapsulated in the story of a princess. That observation is barely on target. Yes, this is Pixar’s first film with a female lead character and she is a princess of sorts, but I think she’s more akin to Katniss Everdeen than Princess Jasmine, and for more than her skill with a bow and arrow. The nuptial obligations have no romantic implication: the key relationship is between Merida and her mother, Elinor, which doesn’t really have a precedent in Disney, beyond Dumbo.

What Brave really reminded me of was the work of Hayao Miyazaki, with its magical, dreamlike qualities, the will-o-the-wisps very much like the odd little beings in Princess Mononoke, and people changing into animals reminded me of Spirited Away, the celebration of nature—its beauty and danger.

If it didn’t quite measure up to the poignancy of an Up, Toy Story or Wall-E, I was still moved by its energy, its vital characters and the eventual, sweet understanding reached between mother and daughter. A lot of the humour of the story is rooted in slapstick, especially in the antics of Merida’s three younger brothers, which is fine. Something for the kids to enjoy and not a bad thing.

And, of course, there’s plenty in the visuals to admire; the gorgeous computer-generated landscapes, Merida’s personable Clydesdale, and her awesome collection of ringlets, hypnotic and fiery. Since Final Fantasy I haven’t seen such lovingly rendered locks. Her hair is a character unto itself.