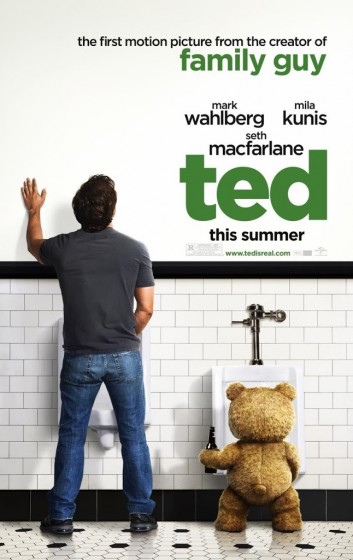 I can’t be the only person who thinks MacFarlane, a king of TV animation having created The Family Guy, American Dad and The Cleveland Show, must be an unhappy dude. I enjoy The Family Guy as much as the next fellow, with its quickfire gags and savvy cultural references, but I recognize MacFarlane’s role as cultural provocateur is regularly couched in a tinge of bitterness. The cynicism is fine on TV, where you can flip away if it gets too sour. In Ted, his first feature film, that nastiness choked the chuckles in my throat.

If you’ve seen the trailer, you get the the high concept. Boston suburban guy John (Mark Wahlberg) made a wish when he was a kid and his magical teddy bear came to life. Ted (voiced by MacFarlane) went on to a career in 1980s popular culture to rival any sitcom star, but then came the fall. As Patrick Stewart’s plummy intro narration explains, eventually people stop giving a shit. So, Ted hangs out doing bong hits with his buddy, John, who at 35 has a live-in girlfriend, Lori (Mila Kunis). Lori is getting tired of the teddy bear schtick, and wants a more committed relationship with John. Which means kicking Ted to his own pad. The fact is, the problem isn’t just Ted; John is a man-child who can’t quite get a grip on what he needs to do to be a responsible adult.

As with The Family Guy, the material I enjoyed most was the culture jamming—great material referencing ’80s camp classic Flash Gordon and its stellar Queen soundtrack, particularly. And there’s a fearlessness in MacFarlane’s humour that I can’t help but admire, for its sheer tastelessness and willingness to skewer, well, pretty much everything. Credit to MacFarlane the first-time feature director who never lets the pace go slack.

The problem is the fact of Ted’s existence isn’t really pushed to the kind of Airplane-level absurdity it might have reached. Ted, with all his plush toy goofiness, is really just a douchebag. He’s never cute. You get tired of his antics pretty quickly. When his life is threatened in the third act and the film looks for audience sympathy, I didn’t really care if all his stuffing got kicked out or not. MacFarlane ladles on the soundtrack strings and the storytelling syrup, but it’s for naught.

Worst of all, the film is peppered with sexist, racist and homophobic jokes. And sheer nastiness. Yup, wishing Lou Gehrig’s Disease on someone, that’s really funny. Similar material is satirically satisfying on TV where the animated characters, representatives of the worst in American character, are so small-minded the joke is on them. That doesn’t fly here. The exchange with Norah Jones made me retch a little, as did the Asian dude with the duck.

Despite an admission that when the gags worked, they do with precision, a bad taste in my mouth is what MacFarlane’s film left me with, along with my ruminating on his state of mind.

You’d think with all his talent and success he might be a little less mean.