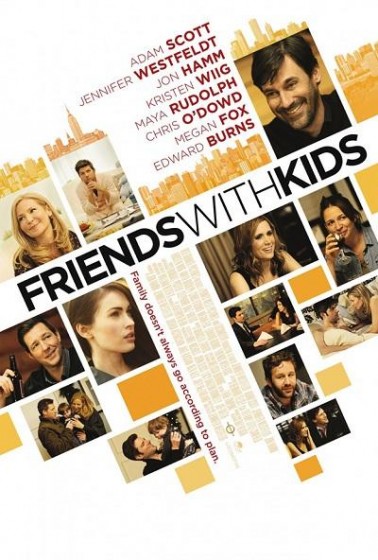 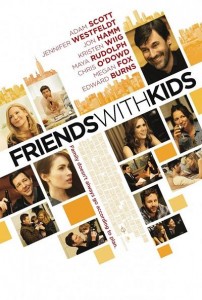 Written and directed by Jennifer Westfeldt

First off, let’s offer Ms Westfeldt a word of congratulations. Though I understand she was thrust into the director’s chair by circumstance, she managed to direct, write and show up in almost every scene of this film. When was the last time we saw a woman pull a hat-trick like that in a Hollywood feature? (OK, it’s Lionsgate, an indie studio, but with Twilight and The Hunger Games, they’re playing in the big leagues.) Yentl? It’s a great accomplishment in the sadly still male-dominated entertainment industry, especially if you consider that the movie succeeds on its own terms.

Westfeldt is Julie, a New Yorker who wants kids before she’s too old to have them. Adam Scott is Jason, her BFF for years, someone who’s seen her at her best and worst. Neither of these people are attracted to each other, and neither is very good at sustaining relationships. Their peers aren’t terribly inspirational, either. Ben (Jon Hamm) and Missy (Kristen Wiig) start out sex-crazed, but when kids show up the couple starts to fall apart. And Leslie (Maya Rudolph) and Alex (Chris O’Dowd) seem to be managing the introduction of offspring into their lives a bit better, but aren’t beyond raging at each other over petty stuff.

Julie and Jason hatch a plan out of a romcom script: The problem with their friends is the pressure of marriage. Julie and Jason agree to just have the kid but not get married. For two capable, reasonably bright people, they really don’t think this through, but they’ll give it a shot. Sure enough, after a single evening of drunken sex, they conceive. (Surprisingly easily, it seems, for a couple in their late 30s. Doesn’t bear up to my experience, but that’s neither here nor there.)

When their child arrives, things start to get complicated. (If everything went smoothly, of course, there’d be no movie.) Petty jealousies do arise, especially when Julie starts seeing Kurt (Edward Burns) and Jason starts seeing Mary Jane (Megan Fox). While attraction between the parental units grows, it never seems to arrive at the same time for the other.

I really enjoyed the trip Friends With Kids takes me on. Sure, it still falls out of the standard romcom tree, hitting a number of the big cliche branches on the way down, but these characters feel real to me. They’re making adult decisions. They’re rude, crude and pretty damn funny. And the film has room for genuine drama: Two scenes in particular, one where the group of friends are gathered around a table in a chalet on a ski vacation and feelings get hurt, and one at a restaurant where love is confessed but not returned, these are moments that deepen the experience of the picture.

The direction is unflashy, but I think that serves the material well. And Westfeldt is a delightful on-camera presence. I hope she gets more work as a result of this movie, as a writer and performer. I discovered her about 10 years back in her first major role, the lead of the wonderful Kissing Jessica Stein (which she co-wrote with Heather Juergensen), and there’s not many scenes in romcoms that choke me up like that one on the porch, where she and her mom (Tovah Feldshuh) talk about her struggles in life and romance. I can’t say there was anything in Friends With Kids that quite hit that high, but still.

The rest of the cast are great, with big props reserved for Megan Fox, who continues to make interesting choices with her career, taking the quality indie route. Maybe Michael Bay scared her off blockbusters for good. I was a little disappointed that Kristen Wiig, usually such a wildcard on Saturday Night Live and crazily funny in Bridesmaids, has such a uninteresting role here. She’s required to cry, which she does handily, but otherwise her part hardly utilizes her comedic strengths. But maybe that was the point, to show she can do other things.

In the end, the message that having children changes you profoundly and in ways you won’t expect, that makes a lot of sense. But it’s not evangelical, it’s just a take-away from a much better than average romantic comedy.