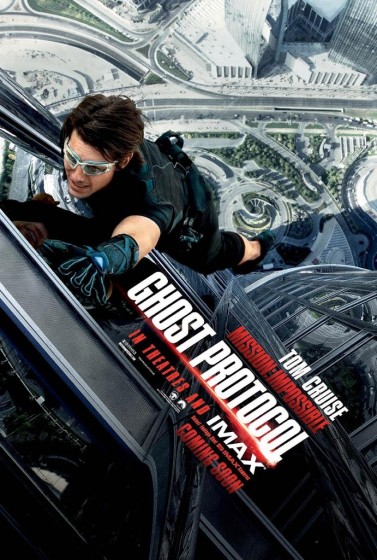 Written by Josh Appelbaum and André Nemec, based on the TV series Mission: Impossible created by Bruce Geller | Netflix

People talk about how the Bourne movies updated the espionage action thriller for the new century, in the feel and the look of the thing. Just consider how the director of the second two films of the trilogy, Paul Greengrass (along with DP Oliver Wood), shot the action sequences. His choices have been very influential—and so few directors do the jagged editing and handheld camera as well. Also consider Martin Campbell’s Casino Royale, which stripped the Bond mythos back down to the studs, revisiting him as a violent thug.

What both those franchises have in common in the new millennium is a fresh and raw attention to detail, where camp and artifice are shunned in favour of brutal violence and at least an attempt at setting the characters and tech in a recognizable world. Realism? Maybe not, but certainly the grand scale of the rocket base in You Only Live Twice has given way to a more recognizable milieu of terrorism and code-breaking.

Mission:Impossible – Ghost Protocol behaves like those updated franchises didn’t really happen. It seems to exist to provide an American alternative to the Pierce Brosnan Bond era of the 1990s.

The budget is all onscreen and the stunts are amazing, I won’t deny that, but in terms of plausibility, Tom Cruise and his cohorts exist in a world much more like the one where Bond drove an invisible car and Halle Berry stepped out of the surf for no reason other than to make us look. The comparison is fair when you think of the 1960s origins of both series.

But about the plot: uber-cool Ethan Hunt (Tom Cruise) is stuck in a Russian prison. His Impossible Missions Force, now disappointingly numbering only two (Paula Patton’s Jane and Simon Pegg as IT spawn Benji) breaks him out. They immediately infiltrate the Kremlin, looking for files on a rogue nuclear terrorist codenamed Cobalt (Michael Nyqvist), but it all goes pear-shaped, leading the IMF being disavowed and a fourth member coming aboard, Jeremy Renner’s Brandt.

Still pursuing Cobalt, the team head to Dubai and eventually Mumbai, where the action sequences only pause long enough to string together a bit of exposition, which is just enough to keep us guessing how they got from Europe to Dubai, why analyst Brandt is so good with weapons, and to the fate of Hunt’s wife, Julia (Michelle Monaghan), who played such a key role in Mission: Impossible III.

Here’s what I liked about the movie:

On a big screen with great sound, it delivers all the mainline any action junkie could want. The stunts and action set-pieces are all spectacular. The scene that takes place on the exterior of the Burj Khalifa skyscraper is the most exciting action sequence I’ve seen since the ceiling-walkers in 2010’s Inception.

Director Brad Bird, formerly of Pixar’s animated hits The Incredibles and Ratatouille, moves into live-action with grace, really utilizing the locations and keeping us engaged.

Cruise, who I’ve found a hard screen presence to love, hasn’t lost a step in terms of his physicality. He’s still a plausible action star. Being in his late 40s, you still buy it, and much credit should go to him.

After four films, the franchise really has gas in the tank. Though I thought the John Woo-directed Mission: Impossible II was disappointing, numbers one, three and four all offer a lot of consistent entertainment value. Big bangs for your buck.

It’s pretty much just the Cruise show. What I really enjoyed about the other movies in the series, starting with Brian De Palma’s in 1996, is that they cast a lot of great character actors in key roles— though didn’t hesitate killing them off (we hardly knew ye Emilio Estevez and Kristin Scott Thomas). Here we’ve got Paula Patton, who is capable, gorgeous, but a little bland, and Simon Pegg, whose performance is solid but they really missed the opportunity to make him comedy relief. His dialogue is dull.

Renner has a bit of Steve McQueen in him, which I really like, but he’s also not given too much to do. A cameo from Ving Rhames late in the running reminds us what cool chemistry he and Cruise had and makes me wish they’d really given him a role here, or found more playmates for Cruise to emote off of.

And, I wish this franchise felt a bit more timely, a bit more current. I wish it had adapted more of the lessons of Bourne and Bond into the workings, so it was just a little more real and a little less OTT and cartoonish, and so maybe we cared just a little bit more about some of those characters.

But in the final analysis, despite a few issues, this is clearly Grade-A action steak, so dig in. If they’re quick about it, maybe Cruise could make a few more. That would be OK with me.