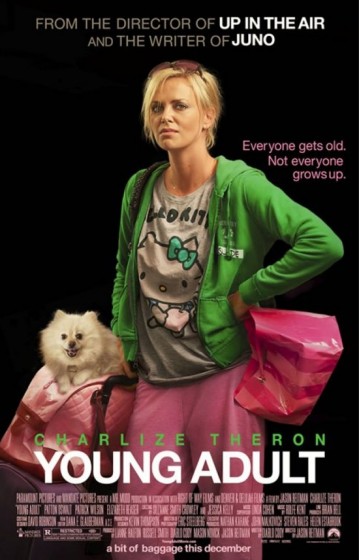 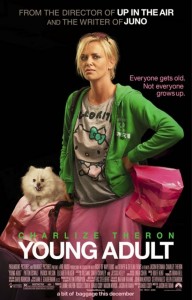 In a high school reunion movie (it’s a genre, you know) Mavis Gary would be the antagonist, the lady who was the mean girl as a teen and is still a bitch 20 years later—even though she’s by many societal standards a success. The closest we’ve seen to her type recently was Rose Byrne’s character Helen Harris in Bridesmaids, and at least she found some redemption at the end of that movie. Don’t hold your breath with Mavis in Young Adult.

This is a very well-made film that has the hallmarks of a low-budget indie Sundance hit except its a lot glossier and the creative team have four Academy Award nods between them—and one win, Cody’s original screenplay award for Juno.

Charlize Theron—in a fearless, anti-glam performance—is in every scene and deserves whatever props she gets for this role. It’s not very often a character so pitiable gets to be in the middle of the story, especially if that person is a woman. I’m thinking about Samantha Morton in Morvern Callar, Jennifer Aniston in The Good Girl. Mavis is far more selfish and deluded than they were.

Mavis lives in a highrise apartment in Minneapolis with a neglected Pomeranian named Dolce. She ghostwrites a series of young adult novels. She eats nothing but fast food, drinks to excess and hasn’t managed to sustain a relationship since she got divorced. Inspired by the email announcement of a new baby, she drives back to her hometown hoping to rekindle the love of her high school sweetheart, Buddy Slade (Patrick Wilson). It’s his baby, he’s happily married. Mavis hangs around, getting manis and pedis, hoping to lure Buddy away from his wife and family, killing time getting drunk with Matt Freehauf (Patton Oswalt), a nerdy dude she barely remembered from high school who still lives in the town.

Mavis is someone who peaked as a teenager and life was never again as good as when she was 17.
Matt had a far more unfair high school experience, but it also shaped who he is now. They make an odd couple for sure, but manage to help each other out. And through Matt, we get an ally on the screen and someone who gets to tell her what’s really going on, while nursing his own issues.

The movie might be considered a dark comedy if there were any laughs. There are precious few. It’s really just a character study, a look at a borderline sociopath, needy and dangerous, headed for disaster. There is a car-wreck rubbernecking quality of pleasure to be taken from Young Adult, the product of the dynamite script and the lead performance.

There isn’t a moment you can’t tell what’s going on in Mavis’s self-absorbed mind, and spending 94 minutes with her might force you to revisit your illusions, always a worthwhile journey.