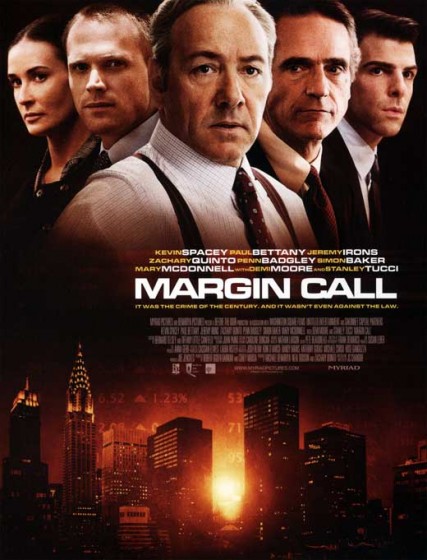 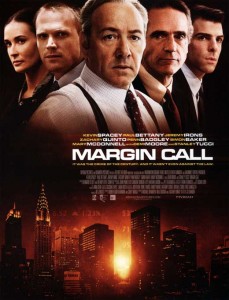 Margin Call arrived in cinemas near me with not much fanfare, which is a shame as it’s all kinds of good.

It’s the summer of 2008 at some Lehmann Brothers-esque New York investment bank, full of morally bankrupt fat cats. Well, maybe it’s not as simple as that, but it’s hard to have much sympathy for these characters who have no real concept of the impact their work has had on the larger world, or how it will. Most of them got into it because they see dollar signs and have a knack for math, even if they trained in other things, like rocket science. But when things sour, you certainly understand their fear.

It starts with a day of layoffs. Middle-manager Eric Dale (Stanley Tucci) is given his walking papers in the most cold and unpleasant way after 19 years of work. He’s been working on a bit of risk- assessing, and heading out the door he tips off one of this subordinates, Peter Sullivan (Zachary Quinto). Sullivan crunches some of those numbers and come up with a forecast that looks grim. Worse than grim.

So, the executive committee gets together, and through the night they figure out what to do with this information: realist Will Emerson (Paul Bettany), the almost burnt-out Sam Rogers (Kevin Spacey, slowly becoming Jack Lemmon), Jared Cohen (Simon Baker), Sarah Robertson (Demi Moore) and eventually, grand fromage John Tuld (Jeremy Irons), who understands none of the logistics, only the bottom line. He knows they must sell everything in order to survive, even though they know what they’re selling will soon be worth nothing. It will bankrupt their clients, throwing the markets into chaos, destroying their reputation in the short term, so long as the company survives in the long.

And in the centre of this maelstrom are these hideously wealthy money managers. Mostly men, they’re trying desperately to figure out how to keep their jobs and their standard of living. Only a couple, including Spacey’s Sam, understand what this could mean for millions of people, the damage that they are doing. They’ve lived on the bubble, one they created, and now it’s popping.

It’s testament to the skill of writer-director Chandor that you care more about these people as the film goes on, that their humanity shines through the machine-tooled masculinity, the posturing and the greed. And it’s also testament to the very skilled cast of actors, all at the top of their game. We can relate to their need to hang onto their jobs, where, despite the huge numbers, they are prone to the same illusions as the rest of us and the same spending habits of most of us, in a volume commensurate with their income.

It might not be the best drama of the year, but it’s in the running. It’s also one of the most timely, which makes it important, a key distinguishing characteristic putting it ahead of many.