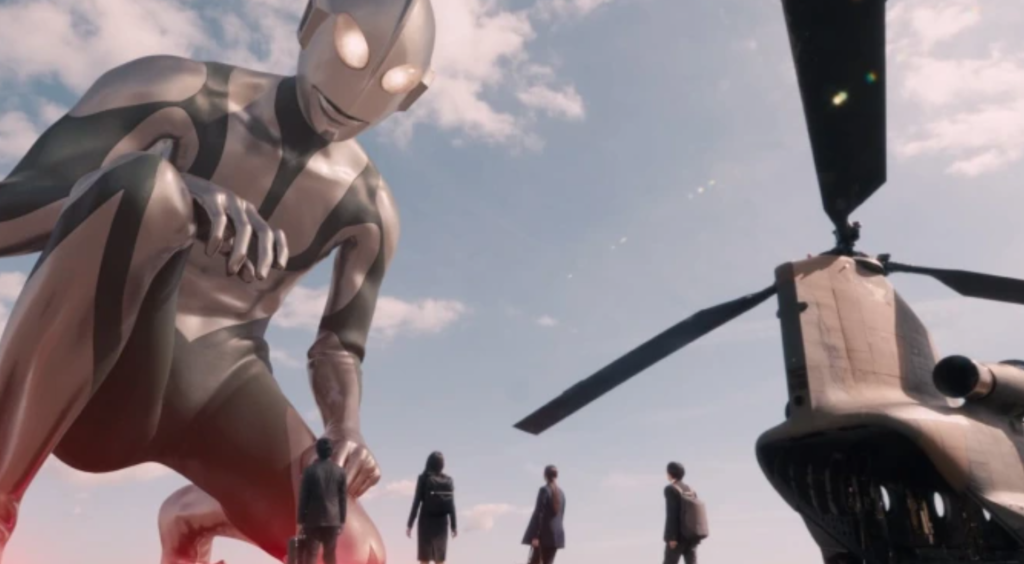 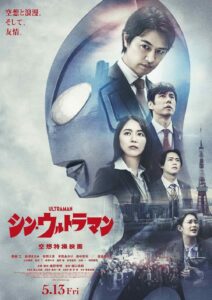 I wasn’t especially familiar with the Japanese Ultraman series beyond knowing it showed up in the 1960s in the genre shared with Godzilla (Toho Studios is a producer here) with all those radioactive monsters known as kaiju. My cinepanion for this screening had a better sense of the roots of the material and remarked that the new movie is full of nods to the original series. To me, it’s all new.

And it is weird!

I mean, with the team of Higuchi and Anno on board — the men who gave us the best Godzilla movie of the 21st Century to date — there’s a lot Shin Ultraman in conversation with Shin Godzilla, especially the moments of self-aware humour, the digs at bureaucratic systems and international politics, and the rapid-fire editing. The camera placement is all over the place — why settle the camera at one angle when half a dozen will do: under chairs, on the ceiling, in the corners of rooms. This is one of the few times where I almost wished the movie was dubbed because it was such a challenge to read the subtitles and keep up with what’s happening on screen.

The strangeness, however, isn’t just in how it’s shot but the whole production — a frequently entertaining and deeply peculiar, psychedelic space-superhero monster alien-invasion movie.

Shin Ultraman is set in a contemporary Japan beset by kaiju — they just keep showing up. The government has assembled a group of experts to contain the threat. This is the S-Class Species Suppression Protocol, or SSSP, who help fight flower monsters, electricity monsters who can render themselves invisible, and subterranean drill monsters, amongst others. Ultraman, a giant silver alien, arrives from space to fight one of these beasts, but vanishes. He leaves behind a version of himself who bonds with the body and spirit of Kaminaga (Takumi Saitoh), one of the SSSP. 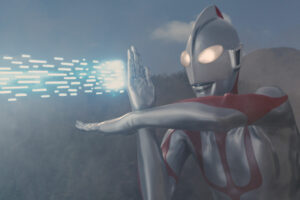 It isn’t long before the kaiju threat pretty much ends — which is too bad since you’d think most people come to these movies to see Tokyo destroyed by monsters. (I sure did.) Instead, we have the arrival of a couple of mendacious humanoid aliens looking to either manipulate or destroy humanity or manipulate or destroy Ultraman and his human avatar, Kaminaga.

One alien, Zarab, looks like a humanoid armadillo, or at least the front half of one, with glowing eyes. The second, Mefilas, mostly appears as a human, though when he takes on his alien form he seems to be an advanced Shogun Warrior. In the midst of this we get conversations about something called a Beta Box, which I confess I never really understood beyond it being an alien MacGuffin, and one of Kaminaga’s colleagues, Hiroko Asami (Masami Nagasawa), gets turned into a giant. 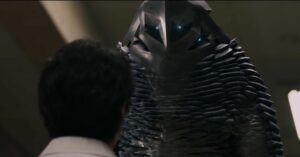 Ultraman faces these existential threats to Earth with mostly political posturing. I was a little surprised how infrequently Shin Ultraman indulges in the kind of wanton destruction these pictures have been built, and destroyed, on. The battle sequences here are fairly impressive, a fine mix of models and CGI, there’s just not nearly as many as I hoped or expected. 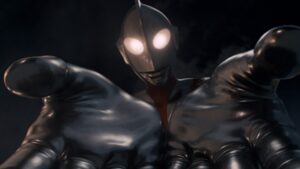 The plotting is also so dense I fear I was left behind more than once trying to piece together what is going on. I certainly didn’t understand the regular shots of characters slapping their own, or others’, rear ends. Something’s clearly been lost in translation. 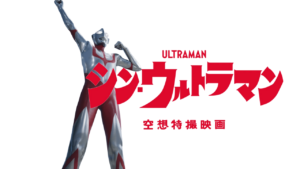 Largely, though, this is a Japanese kaiju movie having fun with the deep genre mythology. When I wasn’t entirely sure I was grasping it, I just listened to the score (by Shiro Sagisu). It does an excellent job commenting on the movie and managing tone — from guitar riffing during battle scenes to playful elevator jazz in the office — I always knew how to feel about what I was watching: mostly bemused.