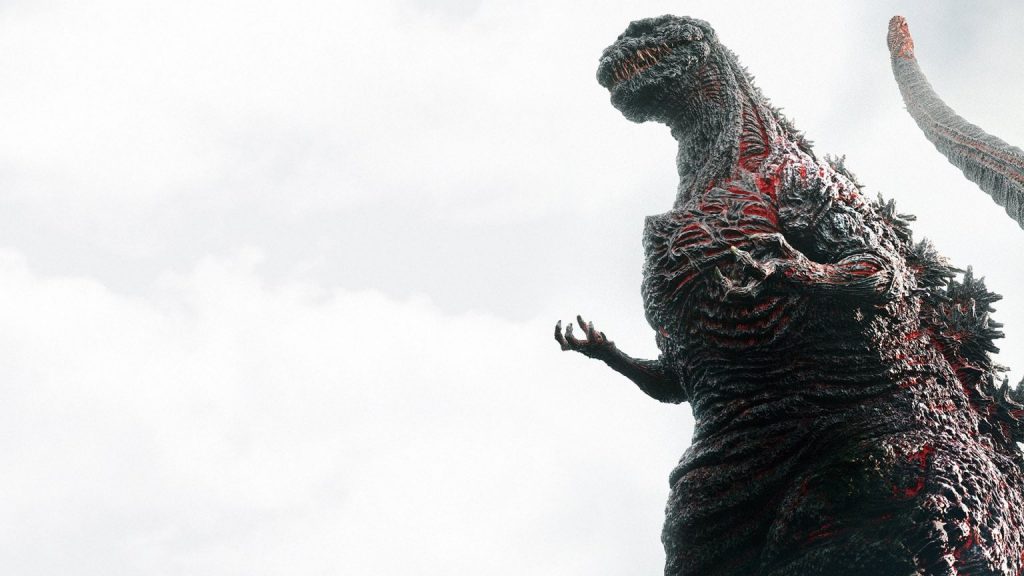 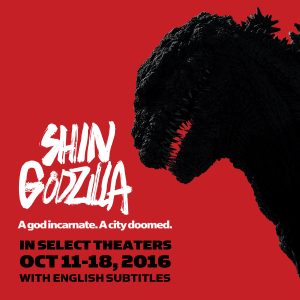 The return of the giant radioactive death lizard to its origins at Toho Pictures is a delight.  It’s a monster movie reboot—from Neon Genesis Evangelion creator Anno—carrying all the Godzilla franchise’s thematic and practical history, while managing to inject some satiric humour and political commentary, too.

We start in Tokyo Bay, where a boat has been left adrift. It belonged to a disgraced scientist who was studying the possibility of huge atomic amphibians. It isn’t long  before his vision has been proven right and Godzilla, looking very different than you might remember, slithers through Tokyo before returning to the ocean, giving the Japanese government a chance to clean up and come up with a way to deal with the threat should it return. And return it does, evolving along the way.

The first half of the film is a pointed and frequently hilarious satire of government bureaucracy, and how our human infrastructure is so poorly reactive to environmental threats. And that’s what Godzilla is—happily they never get around to giving it any serious motivation for wanting to raze the city. Like an earthquake, that’s just what Godzilla does.

We meet dozens of civil servants and staffers—almost all men in matching black suits and ties helpfully introduced with their names and title—who have regular meetings in boardrooms to try and deal with the rampaging force. Decisions are slowly made as various ministries have to learn to cooperate. And then there’s the question of seeking help from elsewhere—this is a sharply anti-American film, with more than one politician grousing at being under the thumb of the nation that once rained nuclear fire upon them. Godzilla was always an allegory for atomic fear and an especially Japanese take on Frankenstein—our meddling with fundamental tech that eventually wants us dead. Now added visuals of tsunami flooding accompanies its arrival.

And those visuals are top-notch. A mix of practical and CGI effects, the destruction of Tokyo is delivered as credibly as can be imagined, and better than any other I’ve seen.  American disaster and end-of-days movie sfx specialists could learn a thing or two here. 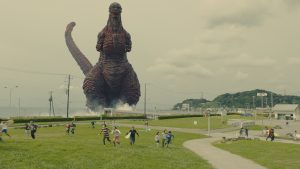 By the time the film swings into the final act, which involves a small group of nerdy scientists and researchers coming up with a solution to stop Godzilla before the Americans nuke the city, the film steps away from the humour and instead goes in a more typical direction.

Another tradition of Godzilla—at least in the Japanese versions—is a deep layer of camp. That hasn’t been forgotten: witness the super-serious line-readings of the ostensible hero, Deputy Chief Cabinet Secretary Rando Yaguchi (Hiroki Hasegowa), or the way the supposed Japanese American liaison, Kayoko Ann Patterson (Satomi Ishihara), has learned all her English lines phonetically.