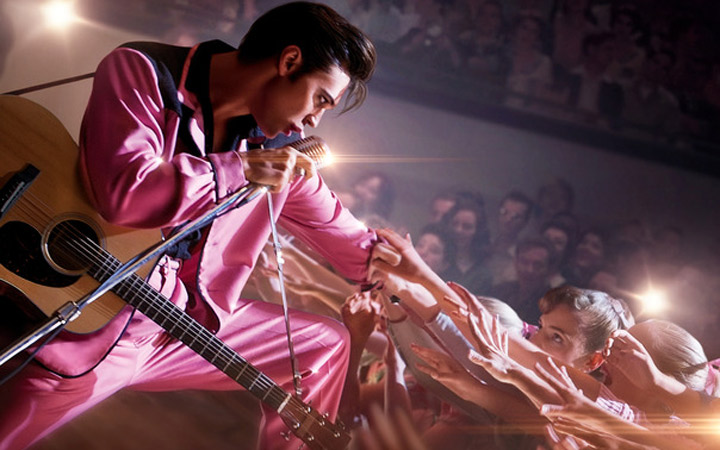 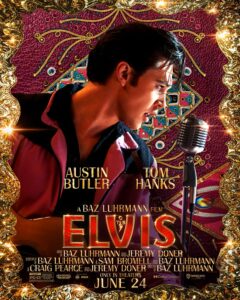 A musical biopic of Elvis Presley suggests the real promise of fleshing out what was a mythical American tragedy where a gifted and charismatic performer, despite all his success, never found lasting happiness. I was optimistic — even following Luhrmann’s mediocre take on The Great Gatsby — but this is unfortunately a much worse picture.

Luhrmann’s sugary style delivers a high that crashes mid-movie, and what’s left is a painfully hokey, hyper-edited, and badly written soap. The single solid performance here is Austin Butler in the lead as he captures some of what made Elvis Presley special, but the picture leaves him stranded.

I won’t deny Luhrmann’s patented energy is entertaining, if fleetingly so, especially in the opening act where we meet young Elvis as an irresistible figure to women in his audience. Luhrmann mixes modern music in with the classic songs in a fiery montage of Elvis’ early success, which feels like a preamble to the proper drama — but the montages never let up. The film exists as a greatest hits of Elvis Presley’s life and mythology from Elvis The Pelvis to Shooting The TV, never settling into anything genuine or affecting. 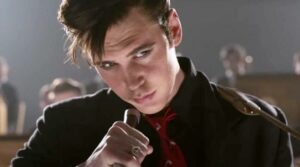 Luhrmann bends over backwards to try and make this relevant to a young audience. We have no trouble understanding Elvis’ appeal to teenagers — mostly thanks to Butler’s vivid portrayal — and how outrageous he must’ve seemed to southern conservatives in the 1950s. But the heavily implied idea that because he wore makeup he appealed as a more challenging, feminine persona, is ridiculous, and all the candy-coated visuals are utterly divorced from anything that resembles reality. A wildly fantastic biography of iconic figures is a legit way to go,  but the over-stylized approach here never feels justified. 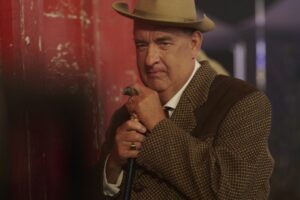 Hovering over Elvis from the start is Colonel Tom Parker (Tom Hanks), who considers his young charge the world’s greatest sideshow, and all of show business a “snowjob,” a chance to separate the gullible from their cash. His instincts prove right — he lets Elvis make all the musical decisions and he markets the hell out of him. At one point I wondered if maybe that’s this whole film’s subtext — as ticket-buyers we’re just the next audience to be snowed by the business of show, and who cares if any of this actually happened.

I almost have respect for that kind of cynicism, and would’ve been OK with it if it was entertaining throughout, but I ended up resenting being taken for a ride by this overlong schlock.

I don’t say this very often, but Hanks is wildly miscast. He’s far too iconic an actor to be plausible in a rubbery fat suit. The accent he puts on doesn’t work. and he’s let down by a script that never gets to the heart of who Colonel Tom was or where he came from, nor does it really offer much in the way of why Tom and Elvis really connected. Only Luhrmann could tell you why he omits a scene where they first meet.

Luhrmann wants to make sure we get the message that Elvis was inspired by the Black culture he grew up nearby, but it’s baldly offensive how the film uses the Black characters (including Kelvin Harrison Jr as BB King) as shorthand for some kind of cultural authenticity in Presley’s music. Elvis wasn’t really a songwriter, he was an interpreter — so, the fact he covered music by Black musicians, making the songs palatable for white audiences somehow makes him cool in 2022? I’d suggest the opposite is true, whatever this movie wants you to believe. 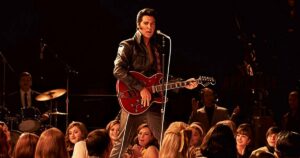 Then there’s the middle-act scenes of Elvis being left behind by the changing times in the 1960s — he’s out making terrible movies in Hollywood instead of playing live music, but is appalled watching Robert F Kennedy get shot on TV. The film tries to sell us that Elvis was deeply affected by violence and civil rights issues, hence his performing “If I Can Dream” on the ’68 Comeback Special.

Feels like a lot of bullshit — especially after Elvis & Nixon — but by then I wasn’t trusting anything this picture is telling me. 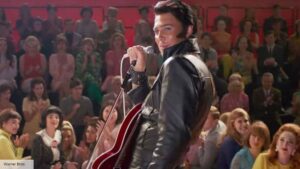 The emotional conclusion arrives when Elvis signs up for a residency in Las Vegas and puts together an incredible band and stage event, but instead of calling it a day at the two-hour mark, we get another 30 minutes of pills and paranoia, where the film steers into all the worst excesses of these kinds of musical biopics. 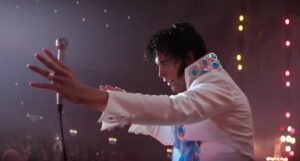 Finally, Elvis does that thing that a lot of these movies are doing these days, sharing a montage of stock footage of the actual individual at the end, and if you’re like me all that will do is make you wish you’d watched a documentary on EP (as is bandmates call him) instead.