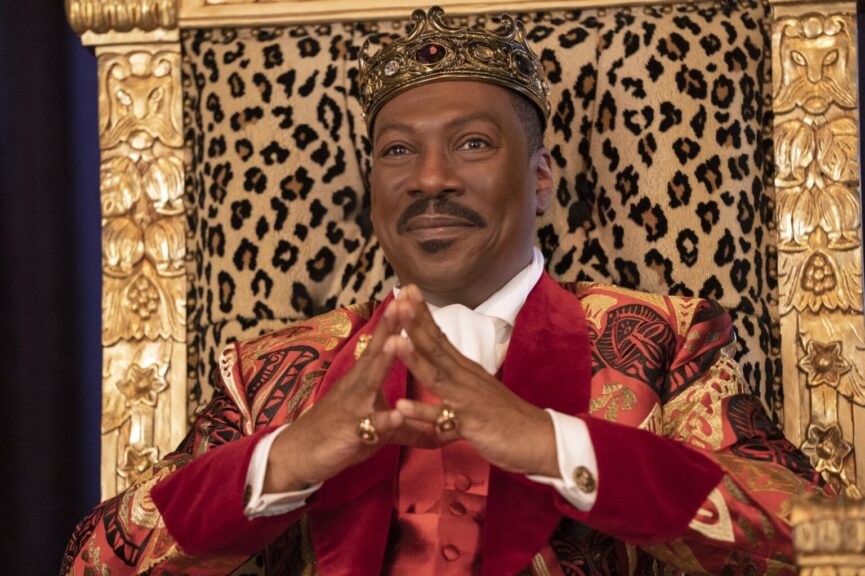 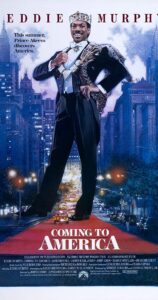 I was a fan of Eddie Murphy when I was a teenager, and so I went to see this hit comedy when it opened in cinemas — and it did nothing for me. Clearly enough people have a fondness for it to prompt a very late-arriving sequel, and I was excited to see the original again after more than 30 years. Maybe there are gags that went over my head the first time.

Nope. I recognize there’s nothing as subjective as one person’s reaction to comedy, but I didn’t find it especially funny. For me, I’ll stick to Trading Places, 48 Hours, and Beverly Hills Cop. Maybe even The Golden Child. (They’re all to be found at the moment on Prime, incidentally.) 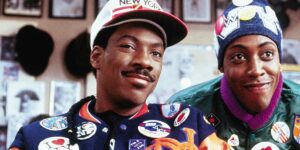 Coming To America is about Prince Akeem of the fictional African nation of Zamunda. He’s been primped and catered to his whole life, and on his 21st birthday he’s going to meet his arranged bride to be. In an entirely unfunny, offensive scene, he gets her to (I kid you not) bark like a dog to prove that any woman who marries him will do anything he asks. But, to his credit, that’s not what he wants — he wants a woman to be independent and have her own opinions.

So Akeem and his best friend Semmi (Arsenio Hall) go to Queens to find that independent woman. They rent a fleabag apartment from Frankie Faison and have all their personal effects stolen. Then Akeem meets Lisa (Shari Headley) and figures she’s his dream girl. 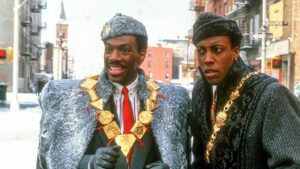 I actually really enjoyed Murphy in this — he’s surprisingly sweet as a fish out of water with a good heart, as implausible as it all is. I mean, given the way he was raised, how did Akeem manage to develop these values of hard work and respect for the opposite sex, especially when naked women have been ordered to wash his body on the regular? That’s a mystery the movie doesn’t care about, and I guess we shouldn’t either. Nor should we care that Zamunda is like a joke from 1930s Hollywood of what an African nation might actually be like.

As Akeem and Semmi make the best of their time in Queens, working at a very McDonald’s-like restaurant owned by Lisa’s father (John Amos), the picture does get a lot more appealing.

For Akeem, the main obstacle to Lisa’s heart is Darryl (Eriq La Salle), the heir to the Soul Glo fortune, an entirely impressive hair product. I did like that gag, and there’s a lot of great support to keep things moving — roles for James Earl Jones, Cuba Gooding Jr, Vondie Curtis Hall, Samuel L Jackson, Louie Anderson, Ruben Santiago-Hudson, and a great cameo from Don Ameche and Ralph Bellamy as the Duke Brothers from Trading Places.

This is also where Murphy and Hall exercise their stereotype chops by playing multiple roles under latex, something that Murphy would return to years later, and another wildly talented African-American movie star, Tyler Perry, would build an industry around. Here it just feels like vanity. 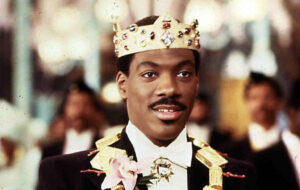 I ended up hating the ending of Coming To America. Spoiler alert for anyone who hasn’t seen it, maybe skip down to the Coming 2 America review.

There’s a great scene in the New York subway where Lisa tells him she doesn’t want to be with Akeem and she walks away, but she then shows up in Zamunda on Akeem’s wedding day. So much for her being an independent thinker or the movie caring about how she came around to the idea of being with Akeem. There was no way this movie wasn’t going to end happily, but this was maybe the lamest possible scenario. 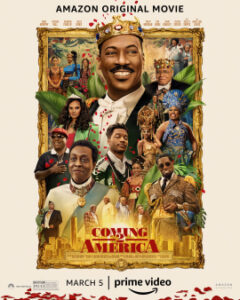 This one starts well, reuniting many of the original cast gathered together in Zamunda, including Arsenio Hall, John Amos, and Louie Anderson. with Murphy and Shari Headley as Akeem and Lisa. They’re celebrating their 30 years of marriage and three daughters, Meeka (KiKi Layne), Omma (Bella Murphy, Eddie’s actual daughter), and Tinashe (Akiley Love), when General Izzi (Wesley Snipes, having a ball in his every scene) shows up, the military leader of Nexdoria (maybe the movie’s best gag), who wants to marry off his son to one of Akeem’s daughters to end years of strife between the two nations. 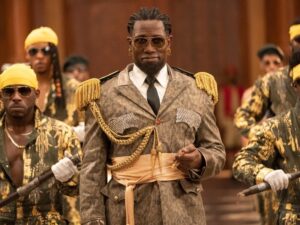 But, the power of succession in Zamunda only passes to the male heir. Cut to a couple of deftly manipulated scenes from the first picture, where Akeem is drugged and taken advantage of by a Queens native, Mary (Leslie Jones), which eventually produces Lavelle (Jermaine Fowler). 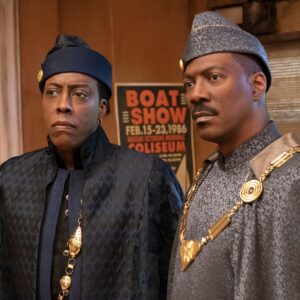 We also get an awesome funeral for King Jaffe Joffer — before he dies, naturally — with a stellar collection of musical acts. Brief but welcome cameo performers include Morgan Freeman (as himself), Trevor Noah, Rick Ross, and SNL’s Colin Jost as a Duke Brothers offspring.

Akeem and Semmi head back to America to collect Akeem’s illegitimate offspring and heir to the throne, and have some more fun with those latex-faced barbers back in Queens. And, damn it if despite the three decades, it all seems pretty fresh, helped no end by the addition of Leslie Jones (and Tracy Morgan, though he doesn’t get much to do) to the cast, as well as a more progressive eye to some of its politics, going so far as to make fun of some of the previous movie’s missteps. 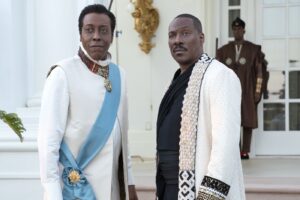 Does it go slack through the middle, as so many mainstream Hollywood comedies of both today and yesteryear do? Yep. It’s when the fish-out-of-water vibes are transferred to Lavelle. He’s brought back to Zamunda and expected to step into the role of a prince. He’s just not as funny as Murphy was, nor are his challenges, say, facing a CGI lion, nearly as compelling. But, we do get a terrific Prince tribute.

Overall, this is inessential and largely inoffensive stuff, but it’s also fairly chucklesome. Faint praise I suppose, but I ended up liking it as much as the first film for the effort it puts in, and maybe even disliking it less for the reduction of the more obnoxious jokes.