Directed by Autumn de Wilde |  Written by Eleanor Catton, based on the novel by Jane Austen | 124 min | Netflix and On Demand 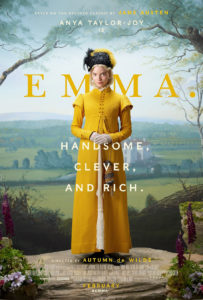 The period, or “full stop” as they say in the UK,  in the title is intentional, apparently. My best guess is it’s there to remind us of the movie’s literary source, or to establish this version of the Austen novel as the final word on the matter. I’m not sure if I’d go that far, but the movie is distinguished in a lot of ways from other attempts — my thoughts on earlier takes, including Clueless, can be read here — mostly by a playfulness in the direction, lavishness in the production design, and Anya Taylor-Joy as Emma, who’s mesmeric.

Just in case you don’t know, Jane Austen’s Emma is the tale of a very bright, very well-off young English woman of the early 19th Century, who lives with her father and spends her time playing matchmaker with her friends and acquaintances, allowing her vanity and selfishness to get the better of her. When she eventually realizes her errors, it teaches her a lesson on the importance of being kind before she finds love in an unlikely place.

The previous cinematic adaptations have navigated this arc with various degrees of success, but from the top de Wilde — an American who comes from the world of music videos — does right by showing us Emma’s warm heart. It’s in her affection for her governess, Ms Taylor (Gemma Whelan, a Game of Thrones veteran), who becomes Mrs Weston in the opening wedding scene.  We also see the affection between Emma and her eccentric father, Mr Woodhouse (the always entertaining Bill Nighy), who is constantly concerned about the health and wellbeing of his guests. 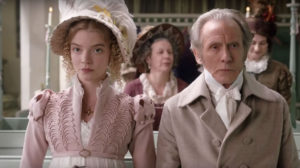 These moments help establish Emma as a decent person at her core, and accordingly we’re more likely to indulge, or at least, understand, her wrong-headed behaviour — trying to connect her naive young friend, Harriet (Mia Goth), with the unsuitable Mr Elton (Josh O’Connor, fresh from playing Prince Charles in The Crown) or dissuade her interest in a local farmer, Mr Martin (Connor Swindells). 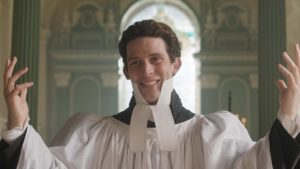 And “young” and “naive” are the key words — even Clueless didn’t present these ladies as resolutely inexperienced or juvenile as they are here. Emma’s constant critic, Mr Knightly (Johnny Flynn), is refreshingly caustic and in his own way awkwardly out of his depth, which makes him less of an obvious choice for matrimony than in previous iterations of the story where we could all see right away he was a proper match for our lead, even if she couldn’t. 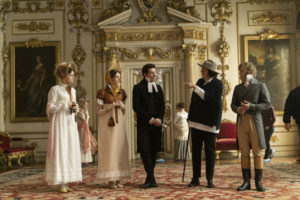 What’s also remarkable here is the tension between an almost musical theatre sense of tone — it’s like a Gilbert and Sullivan comic opera without Arthur Sullivan’s songs — and an exacting sense of production design — every collar, corset, drapery, crumpet, and spit-curl is just so, a sumptuous, ostentatious feast of colour and detail. And inside this very bubbly, very ornate world of early 19th Century England is a lot of room for critique of its vulgar wealth — there’s not a below-stairs character who gets a line, but don’t forget to pay attention to the facial expressions of the servants for further narrative subtext. There’s even room for a little heat beneath the lace, slashes of nudity, and an altogether sexy dance scene that makes explicit the chemistry between Knightly and Emma that heretofore had only been suggested. 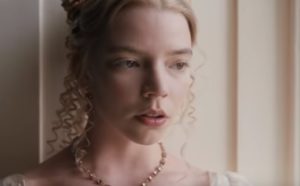 If there’s any justice, Emma. will vault Anya Taylor-Joy into a different category of leading actor. As much as I’ve admired her in genre pieces like The Witch, Morgan, and Split, her poise and control in this role, closer what she brought to the excellent Thoroughbreds, shows she can do anything. The A-List awaits.