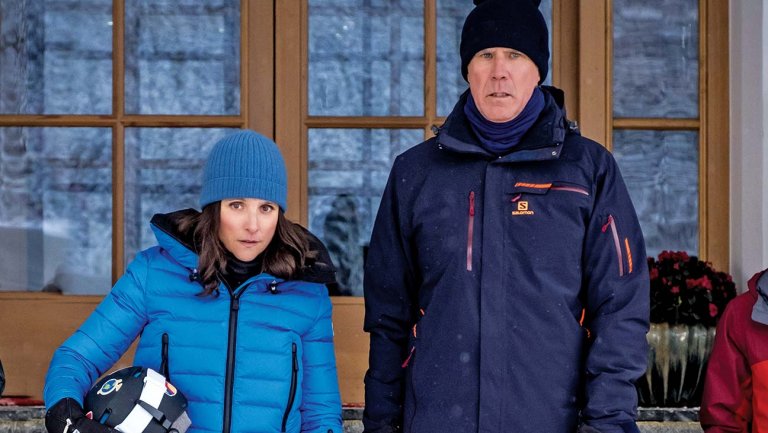 Back in 2014, Carbon Arc Cinema in Halifax screened Force Majeure, the Ruben Östlund picture. The film won the Jury Prize at Cannes and was the Swedish entry for Best Foreign Language film at the Academy Awards. It’s now available on iTunes, and there’s a copy on DVD at the Halifax Public Library. 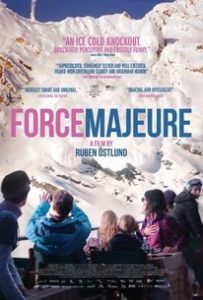 It’s about a family that unravels on a ski vacation in the Alps. The inciting incident is a moment when the two adults, Thomas and Ebba (Johannes Kuhnke and Lisa Loven Kongsli), and two kids are eating on the deck of a restaurant and see an avalanche coming toward them. At first they think it’s controlled, but then, all of a sudden, the wall of snow threatens to crush them all. The man grabs his gloves and phone and runs, leaving his wife and two kids to their fate. Everyone is fine, it was just a cloud of powder, but the revelation of a fundamental difference between them, the woman protecting the kids and the man protecting himself, drives a jagged wedge into the couple’s happy life, and then he compounds the problem by denying what happened. He may have escaped the avalanche, but he’s instead destroyed by his monolithic shame. 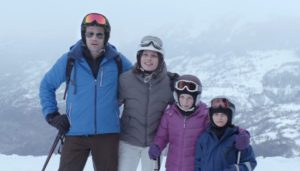 Into this brutal circle of recrimination comes another couple (Fanni Metelius and Kristofer Hivju, unmistakably Tormund Giantsbane from Game of Thrones), and the fragile construction that is the modern male gets parsed, dissected, and brutally satirized. It’s hilarious and excruciating in about equal measure.

Östlund. who would do similarly great work in The Square, is a filmmaker of sublime brilliance—his gift with narrative, tone, with visual storytelling, and with actors, he makes it all look effortless. He shows some perverse genius in choosing to go with the pomp of Vivaldi’s “Summer” to score a movie set during a ski vacation. Any remake of this material would have a tough time topping it, but that’s never stopped Hollywood before.

Downhill | Directed by Nat Faxon and Jim Rash | Written by Faxon, Rash, and Jesse Armstrong,  based on the screenplay by Ruben Östlund | 86 min 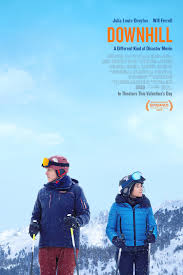 Once again we have the family on an Austrian ski vacation, except they’re American. Why they’d go all the way to Austria and not, say, Aspen, is unexplained. Billie (Julia Louis-Dreyfus) and Pete (Will Ferrell) have two kids, both boys this time. Just like in the original, the inciting incident is the avalanche that terrifies the family, with Pete running for cover. Except, weirdly, this time the snow looks a lot more like a CGI effect, a lot less authentic. The whole movie suffers from that lack of authenticity, and ambition, of its predecessor. 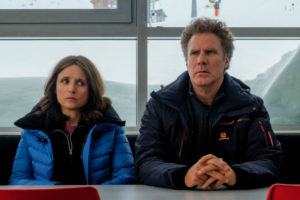 The American remake also struggles with tone. Louis-Dreyfus and Ferrell come across like they’re acting in two different movies. She brings all the dramatic weight of a woman whose eyes are open to who her husband really is, but we see through him right away. We see him in scenes before the avalanche, and going back through Ferrell’s whole career—with the possible exception of Stranger Than Fiction. He’s a goofy, insecure, immature caricature of a modern man, a man-boy, and so when he runs in fear from the avalanche, we’re not surprised. We only wonder how his A-type wife never saw it. 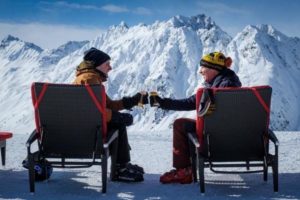 If the film had cleaved to what Ferrell brings, a broad, slapstick approach, there might’ve been a few laughs, or if it surprised us by allowing the scenario to feel real, which is Louis-Dreyfus’ approach, and squeeze out awkward, uncomfortable laughs, more like the original film—that might’ve worked. By treading some kind of middle ground, all it risks is being timid and tepid.  With all due respect to Ferrell’s gifts and comedic success, I spent much of the running time wondering how much better it would’ve been with Paul Rudd or Jason Bateman as the male lead, actors who can be both pathetic and sympathetic in material like this.

The schism between the leads’ approach makes Downhill unfeasible, but it’s not the only issue. Filmmakers Faxon and Rash, who’ve had success with their work in The Descendants and The Way Way Back, seem a lot less confident here. It’s great seeing Kristofer Hivju once again, this time playing a security figure at the resort, but he’s introduced to offer genuine antagonism, then vanishes.

The film also diverges from the original with a subplot involving Billie and a ski instructor (Giulio Berruti), opening an exciting possibility for her character, but once again the film won’t go there.

Worse, in the third act, Faxon and Rash scrub away any possibility of ambiguity. It was already a lot less universal in its take on this particular couple than the original, but in scenes lifted directly from the previous film it’s explicit where the other was much more powerfully suggestive. 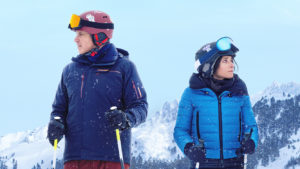 It’s frustrating that even with talented filmmakers working on a project, Hollywood can’t help but fuck up great material by watering it down.