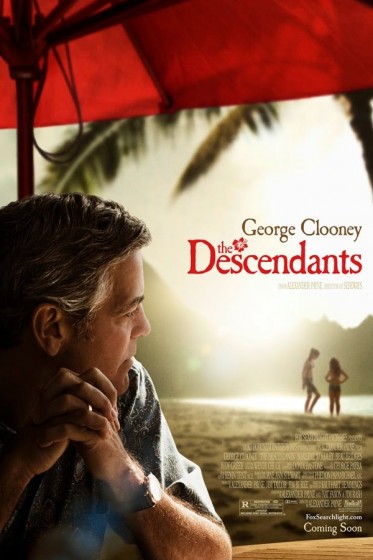 Directed by Alexander Payne
Screenplay by Payne, Nat Faxon and Jim Rash from a novel by Kaui Hart Hemmings

George Clooney is Matt King. Matt is the trustee of a large parcel of land in Hawaii, a place that seems a whole lot like paradise despite Matt’s voiceover telling us that everyone’s life has rough patches, even in a place like this. However hard to believe his protestations at first, he’s setting us up for a lot of truth.

Matt’s wife, Elizabeth (Patricia Hastie) is in a coma due to a boating accident. His second daughter Scottie (Amara Miller) is acting out, texting nasty things to her classmates, and the elder daughter, teenaged Alexandra (Shailene Woodley), is getting drunk at her private school and hanging out with Sid (Nick Krause), who seems to have a whole dollop of Keanu Reeves’ DNA in his makeup.

And as Matt is just getting to grips with the responsibilities of being a single parent and feeling the pressures of cousins who are serious about selling that land, he finds out his wife—with whom his marriage wasn’t going so well anyway—was cheating on him with a real estate agent. If you’ve seen the trailer, you got that revelation, along with the scene of Matt running in flip-flops, his jowly jowls shaking as he goes down to the house of friends of his wife to find out about her indiscretions.

What you don’t get in the trailer is the authentic anger and grief that follows, one of a number of great and genuinely emotional scenes in the film. I was reminded that this is directed by Alexander Payne, who in his films About Schmidt and Sideways trafficked in authentic emotions and men stripped raw by circumstance to find some essential part of themselves. Those movies were good but not perfect—I found the former a bit too dour in places and the latter maybe a little implausible—but this effort, his first feature in years, improves on both of them.

Payne has an effortless way of navigating adult complexities, and in Clooney he’s found an adept partner. Clooney’s Matt is way out of his depth at the beginning of this, but his loyalty to his family, even to his unfaithful wife, overcomes a lot of his highly justifiable reactions to the information he’s received. He goes from an out-of-touch schmo, who at least is self-aware enough to know he’s schmo, to being a hero of sorts, and we go with him, every step. As Alexandra tells him, “Don’t be a pussy,” and he takes her advice. Clooney is refreshingly free of vanity and I didn’t catch him playing a single false note. The film follows suit, with the kids and the rest of the supporting cast, including Judy Greer, Beau Bridges, especially Robert Forster and even Matthew Lillard, known largely for his broad comedic work, giving solid performances.

The land sale subplot winds up defining the film and Matt’s journey. He’s trying to do right by his daughters as well as live up to the responsibility laid upon him by those who came before. The pleasure here is in the levels of storytelling, the moments of subtle comedy layered atop deep and satisfying drama. Easily one of the year’s best films.