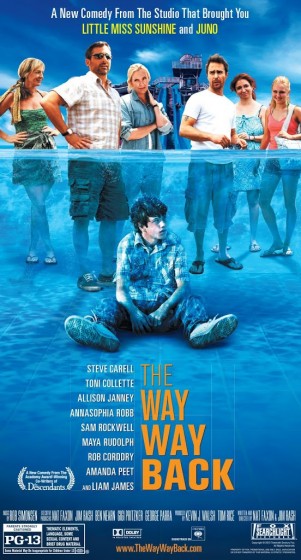 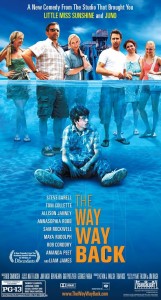 Written and Directed by Nat Faxon and Jim Rash

Being 14 is no fun for most of us. There’s this diabolical combination of feeling like you know everything about the world, it’s all crystal clear in your pubescent brain, and feeling totally adrift and uncertain, especially around the opposite sex. Meanwhile, what you understand of adult behaviour feels rife with compromise and hypocrisy.

This perspective is one of the things that filmmaking duo Faxon and Rash get so very right in their directorial debut. The filmmakers, better known as actors—they also offer vivid character support in this project as Roddy and Lewis, respectively, two guys who work at the waterpark that serves as a central location for the film. But they really scored big in winning an Adapted Screenplay Oscar for The Descendants.

The Way, Way Back has much of that movie’s sly and sweet observational eye, and a tone that nicely balances drama and comedy in a way that filmmakers like James L. Brooks and Sidney Pollack used to be masters at doing. It’s also very much a summer break movie, with strong roots in pictures like Caddyshack and Meatballs, though far less broad. Those roots play out in the sets, props and references—comfortably retro down the line. Aside from the odd cell phone, there aren’t too many contemporary signifiers. With retro comes a certain familiarity, but in this case, that’s totally OK.

Liam James is Duncan, the introverted 14-year-old. He’s on his way to the beach house belonging to the new boyfriend, Trent (Steve Carell) of his mother, Pam (Toni Colette), along with Trent’s nasty teenaged daughter, Steph (Zoe Levin). We encounter Duncan first in the back of Trent’s station wagon, with Trent browbeating him in a way some insecure, obnoxious adults do. Duncan seems to have good reason for not liking Trent, and to resist the implied plan that this could be one of those vacations that makes a family.

Arriving at the cottage they’re immediately surrounded Trent’s neighbours, including the very loud, very crude Betty (Allison Janney) and her kids, the cool-but-friendly Susanna (AnnaSophia Robb), and Peter (River Alexander), the kid with the lazy eye. Trent’s friends—Rob Corddry and Amanda Peet—are partiers, and you can see Pam feels a bit out of place. But she defers to Trent rather than Duncan.

This whole first act feels pretty much like set-up, and is a bit slow-going. The characters are well-drawn, but it’s largely Duncan feeling alienated as he watches other people of varying ages having fun while he mopes around.

Then Sam Rockwell shows up. He’s Owen, the manager of a waterpark in the town called Water Wizz.   He single-handedly gives The Way Way Back a chaotic spirit, playing the don’t-give-a-damn father-figure to Duncan who sets the kid up with a job at the park. That forces Duncan out of his shell, and the people at the park are a kind bunch, including the Maya Rudolph as a potential love interest for Owen.

If this movie had been made in 1981, the Rockwell role would have been played by Bill Murray or Chevy Chase, though I don’t know if they would have been any better than Rockwell is in this. I’ve always liked Rockwell: his peculiarly anarchic spirit lit up movies like Moon, Seven Psychopaths and Galaxy Quest. Here, he literally gets all the good lines. He’s hilarious.

I’ll say no more than that about the plot. What I will say is the picture is something of a delight, a perfectly sweet summer movie, nicely balancing pathos with a few solid laughs while providing a rich collection of characters to care about. Even Trent, who Steve Carell infuses with a darkness we see too rarely from him, gives us a moment or two that allows us to pity the guy.

On a day when it’s too rainy to go to the beach, this is the one to see.