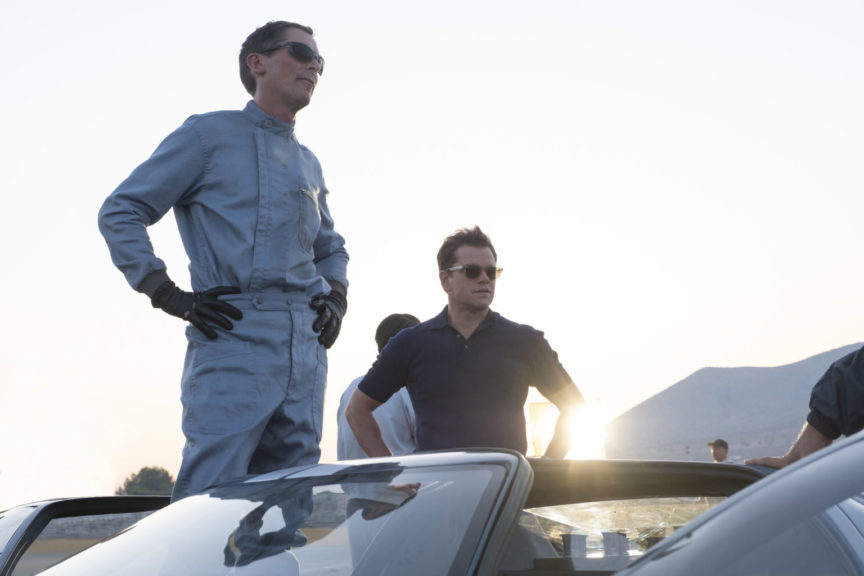 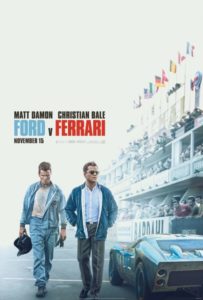 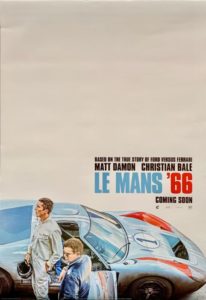 This is a motor racing picture, but the rubber hits the road probably 20 percent of the film’s running time—the rest is a story of friendship, big dreams, and that thing Hollywood does better than anything: celebrate American exceptionalism.

Back in the 1960s, Enzo Ferrari (Remo Girone) and his cars were unbeatable at the annual 24-hour race at Le Mans. France. The only American to ever win that race was Carroll Shelby (Matt Damon), who retired from racing due to health issues, but went on to design and sell his own cars and partner with Ford. We meet him and his Brummie pal, driver/mechanic Ken Miles (Christian Bale), racing cars in the desert, neither of them doing particularly well in their finances, but they still know how to win. Miles is a hardheaded sort—Shelby calls him “Bulldog”—and doesn’t get on well with others, but he knows cars inside and out. Shelby ends up being his agent of sorts when Ford comes calling. 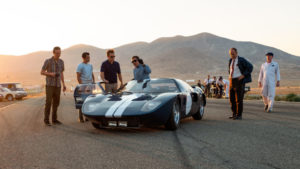 You see, Ford made entreaties to Ferrari—the Italian car-maker was broke, so Ford figured it would help the American car company’s bottom line to take on the sexier Italian brand, but they bungled it, and Fiat ended up making the deal. Enzo said some unflattering things about Henry Ford II (Tracy Letts), which got back to him via one of his lieutenants, Lee Iacocca (the always welcome Jon Bernthal). In a scene that’s played for laughs, Ford reveals he’s a big, bigoted baby, and throws all his weight behind a plan to show up Ferrari at Le Mans with a Ford racing car. 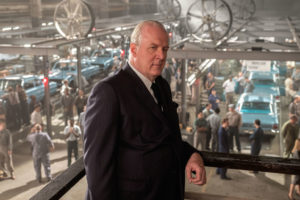 That’s when Shelby and the troublesome Miles come in. The only character who gets a personal life beyond cars here is Miles, who dotes on his teenage son, Peter (Noah Jupe). His wife, Mollie (Caitriona Balfe), is frequently the only adult in the room, but this is another thankless role for a talented woman who spends most of her screen time reacting to her husband’s bad and reckless behaviour. 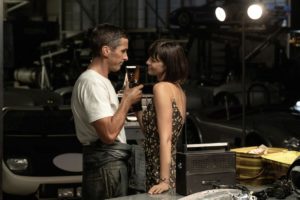 Otherwise, this is a well-made, old-fashioned sports movie—Mangold directs with a lot of zest in both the racing scenes and, more importantly since they’re the real meat of the movie, the many scenes of conversation between the key players. Much of the drama here isn’t stewed by whether Miles and Shelby can build a car that’s good enough to match and maybe beat Ferrari—that seems within their grasp—it’s whether the marketers at Ford will sabotage their efforts with their constant bad ideas—Josh Lucas plays a particularly egregious corporate douchebag, opposed to Shelby and Miles’ maverick individualism and proven excellence because they aren’t “team players.”

There’s definitely a take on this movie that this is just more tired boomer myth-making—it wants us to swallow yet another tale of American men who did great things because they resisted the corporate, or worse, communal, agenda, because in their hearts they were talented outlaws. I can see that argument—it sat on one of my shoulders for most of the movie, whispering in my ear.

On the other shoulder was the recognition of a certain brand of Hollywood hokum, which Ford v Ferrari is an undeniably excellent example. This is a high-performance machine if you want to take the ride, and boy, those racing sequences are spectacular, taking the chequered flag from that other solid motor racing movie of recent years, Ron Howard’s Rush.

The sparring leads, Bale and Damon, offer so much to enjoy. The film doesn’t shy away from the suggestion that, much like Ford, they’re big babies, too, prone to the regular donnybrook. Bale has the flashier role, and he’s terrific, but the heart of the movie resides in Damon’s sterling work. He gets the best moments late in the running, and has rarely been better.