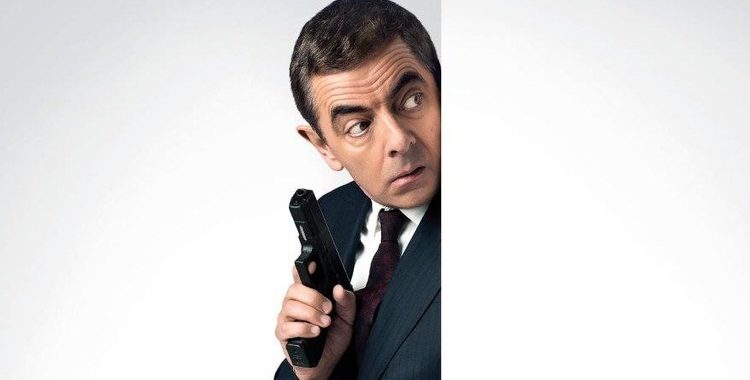 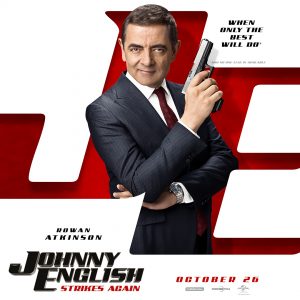 I’ll admit it, I wasn’t all that excited to see these films. The reviews have never been great—on Rotten Tomatoes, the second film has the best score at a whopping 38%. I have plenty of respect for Rowan Atkinson—Blackadder is a longtime favourite—but I didn’t think the world needed another James Bond-inspired comedy following the ubiquity of three Austin Powers movies.

Having watched them, I don’t know that my opinion has changed a whole lot.

But Stephen Cooke and I are talking about spy spoofs on LENS ME YOUR EARS, our film podcast, which cued the dive into this sub-genre. Thanks to Stephen’s suggestion, I discovered a terrific comedic David Niven spy picture from 1966 entitled Where The Spies Are, the more recent French spy comedy OSS 117 Cairo: Nest of Spies (probably the best of the genre IMHO so far), and the Dwayne Johnson/Kevin Hart actioner Central Intelligence. Our conversation about these pictures will be up online soon.

The Johnny English movies are consistent, inoffensive, and occasionally fun. They’re nowhere near the best spy spoofs, but taken as a whole, Atkinson’s gifts as a physical comedian make them entirely undemanding entertainment for the genre fan.

This third film is probably the weakest of the three. In it, former MI:7 agent English—a complete buffoon who somehow always gets the job done—has been teaching geography at a private school. He’s secretly looking for recruits to the service, of course. But he’s brought back to the fray by a hacker who reveals the identities of every British agent in the field, forcing this old-school analogue agent to get back into the game. He joins forces with his faithful assistant from the first film, Bough (pronounced “Boff,” played by Ben Miller), and sets out to track down the hacker on the French Riviera, instead finding Russian agent Bhuletova (007 veteran Olga Kurylenko). This while the deeply stressed British PM (Emma Thompson) plans for a G-12 conference in Scotland and asks for security assistance from American Zuckerberg-esque digital wizard Jason Volta (Jake Lacy). 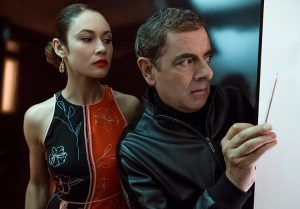 There’s a scene where other retired agents show up—played by Michael Gambon, Edward Fox, and Charles Dance. It actually ends up being a disappointment, because these great actors’ appearances are just cameos. Instead of taking this in a genuinely different direction—can you imagine a film where those three guys are part of the action?—Strikes Again ends up being more of the same.  Not even the always-welcome presence of Thompson ups the laugh quotient much, though I did enjoy seeing her and Atkinson in a scene together again—I think it’s the first time since they were both in the Jeff Goldblum-starrer, The Tall Guy, some 28 years ago. 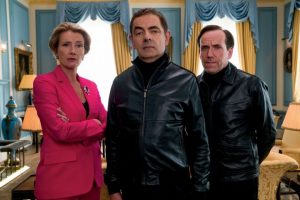 A throwback to Timothy Dalton-era Bond is the appearance of the mid-’80s Aston Martin, maybe the most muscular edition of the famed automobile, here in cherry red. It’s a kind of highlight, for the 007 fetishist. 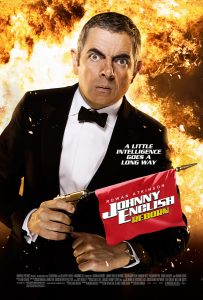 The hopelessly inept spy is back in this sequel, again essayed by Rowan Atkinson. This time he’s tracking down a secret trio of assassins called Vortex. Each assassin is part of the CIA, KGB, and MI-7, respectively.

There’s a great sequence where English is chasing a parkour expert over the rooftops of Hong Kong. The British agent prefers to stroll, walk through gates as the other guy jumps over them. He takes the elevator while his antagonist climbs down the outside of the building. He’s bumbling, but he actually achieves a modicum of hilarious smoothness here. Earlier in the film he learns how to drag a concrete block with his testicles in one of the many culturally insensitive sequences—he’s being trained in some South Asian monastery—a riff on Batman Begins, no doubt. I don’t even want to tell you how the word Mozambique triggers a certain percussion in English’s head. I suppose the argument could be made it’s making fun of colonial British attitudes, but this picture is nowhere near nuanced enough for that. 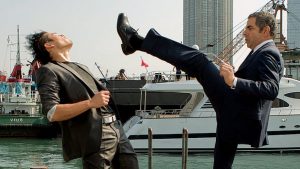 But otherwise it’s not awful. In fact, more of the gags work than the first film, as the picture feels more inspired by the Daniel Craig Bond films, which is more contemporary, obviously. Making fun of the Roger Moore Bond so many years since the last of his 007 pictures is a bit pointless. Reborn actually delivers a few thrills along with the odd chuckle. And this material was enough to draw supporting performers Gillian Anderson, Dominic West, and future Academy Award nominees Rosamund Pike (also a former “Bond Girl”) and Daniel Kaluuya. They deserve major kudos for making this film the best of the three. 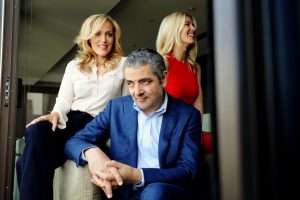 A welcome addition is a Q-type character, Patch Quartermain, the agent who takes care of the Toy Shop, where all the gadgets are tested. He’s played by Tim McInnery, who of course was Captain Darling back in Blackadder Goes Forth. He’s had so many mishaps in his professional life he’s lost his legs and right hand. Oh, and there’s a great segment later when English’s under mind control, very susceptible to suggestion, and Cameo’s “Word Up” comes on. “Put your hands in the air like you don’t care,” etc. That was pretty hilarious. As is English’s pronunciation of “Susan.” 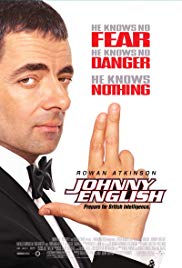 I know Atkinson is probably best-known globally for his rancid little homunculus, Mr Bean, but I was never that into his physical comedy, preferring the wordplay in Blackadder. This series is far more Bean than Edmund, but it’s really just an easy-going family comedy making fun of popular movies most people are likely to recognize.

Atkinson’s agent is elevated to Number One when all the other agents die, and he’s sent to protect the Queen’s jewels from a thief. The villain here is Pascal Sauvage, a French prison industry magnate with a claim to the British throne. He’s played by John Malkovich with an accent more outrageous than even the one he sported in Rounders. 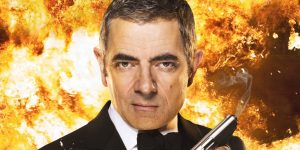 This is extremely silly stuff. There’s a decent car chase through London (with a lovely new Aston Martin) that’s worth a few laughs, but I’d say the ratio of jokes that don’t work to the ones that do are about three to one. Also, what the hell is Natalie Imbruglia doing in this? A credit to Ben Miller as Bob Bough, English’s long-suffering sidekick.

A big surprise here is that the script is partly by Neal Purvis and Robert Wade, the writers of 007 going back to Brosnan. It’s like all the jokes they thought up while writing a more serious kind of spy movie they saved for this picture. I’m not sure it’s something worth bragging about on their CVs, but there it is.