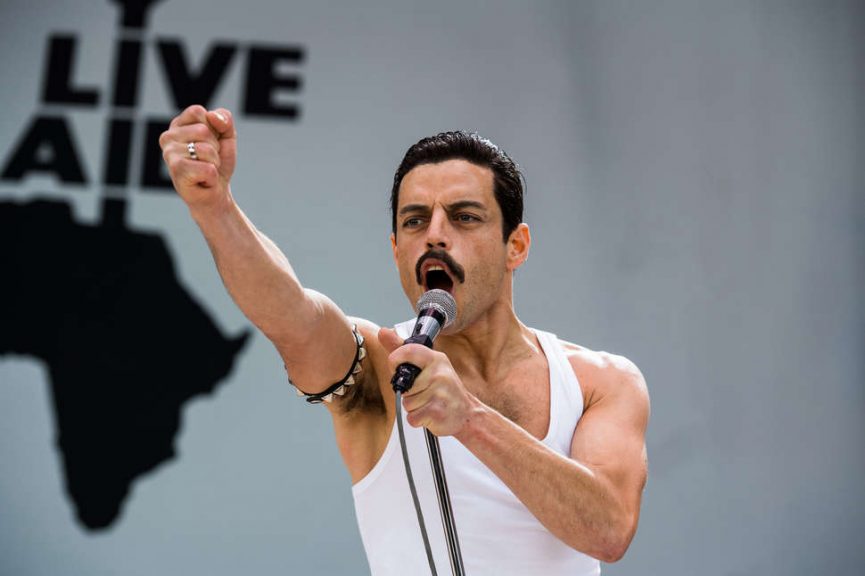 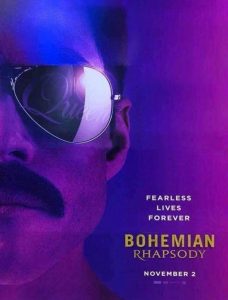 Witness the return of the big budget rock biopic. It’s been years since there was one at this scale, but the epic story of the British rock band Queen, and its remarkable lead singer Freddie Mercury, arrives with more than its fair share of pre-production issues and during-production issues with its controversial director.

Given all those problems through the picture’s long gestation, we should probably be thankful it’s not a disaster, and it isn’t. It’s an effort that embraces every rock bio cliche I can think of,  and a few I hadn’t, while at least managing to entertain, especially in the recreations of the bands legendary live act and appearance at Live Aid. Singer—and his late-arriving replacement, Dexter Fletcher—frame their story as a fairy tale. This is more akin to a Broadway stage musical, all dramatic flourish, broad strokes, with just the barest nod to realism. 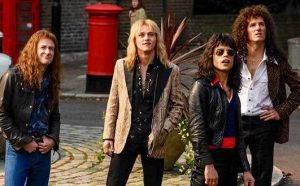 Bohemian Rhapsody relates how Farrokh Bulsara (Rami Malek, terrific even while his prosthetic buck teeth are cartoonish) rose from being a shy, suburban immigrant lad to the strutting, flamboyant Freddie Mercury, the frontman of the powerful 1970s and ’80s rock act. Gwilym Lee, Ben Hardy, and Joseph Mazzello also capably impersonate guitarist Brian May, drummer Roger Taylor, and bassist John Deacon, respectively. The film makes time for Mercury’s marriage to college girlfriend, Mary (Lucy Boynton), and his struggles with his sexuality, eventually leading to his party-fuelled lifestyle as the gay rockstar who kept his preferences hidden from the public. This as the band heads out on massive world tours and engineer one hit after the other—”Bohemian Rhapsody,” “We Will Rock You,” and “Another One Bites The Dust,” get welcome studio time, though sadly not “Under Pressure.” (You gotta figure there’s a Bowie biopic coming down the pike, with Elton John getting his next summer.) There’s a funny, if somewhat distracting, cameo by Mike Myers as the EMI honcho who won’t let the band release their operatic magnum opus as a single. 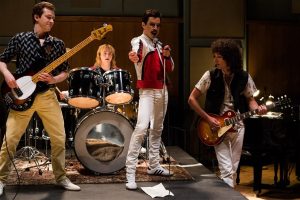 This is PG history all the way, burnishing the official story rather than revealing too much that could genuinely scandalize, or even allow the persona of Freddie Mercury feel like a complex human being. In some respects it’s a shame the picture is so structurally conservative—the regular repetition of the word “family” around the band’s dynamic should give you a sense of where this is all going. It dovetails Mercury’s embracing of his gayness with the platitudes of rock and roll excess, which, of course, leads to his contracting AIDS. It lends the entire affair an unpleasant tang of lifestyle judgment. 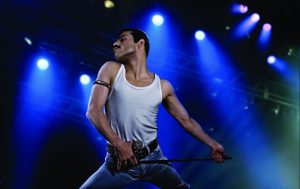 But all is forgiven once the music starts. I understand Malek and Mercury somehow share digitally amalgamated vocals—I expect it’s a lot more the latter than the former—but whatever they did, it’s impressive. The concert stuff is convincingly recreated, with the finale at Live Aid in Wembley Stadium an astonishing, presumably CGI construct in the wide shots. I was all in, and I’ve seen that footage many times in the past. Though the performance is contracted for the big screen, it’s delivers all the grandeur and communal joy of that moment in July, 1985. 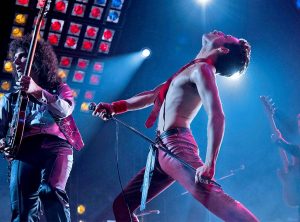 Just like the deft application of ABBA’s music forgave a lot of the narrative crimes of Mamma Mia and its sequel, so too does a vivid depiction of what Queen and Freddie Mercury were like in concert make Bohemian Rhapsody a lot more fun than its cliche-ridden script would otherwise allow.