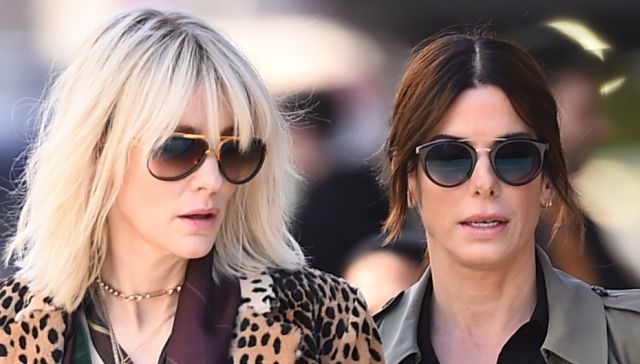 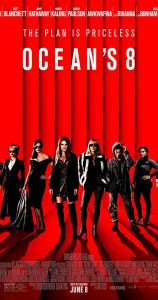 Debbie Ocean (Sandra Bullock) is Danny Ocean’s little sister, and she’s very much into thievery, the family business. We meet her as she’s released from a stretch in prison, and the first thing she does is scam a department store for beauty products and a luxury hotel for a room. Then she reconnects with her old pal Lou (Cate Blanchett)—and there are subtle suggestions these two may be, or have been, more than friends—and the two of them plan a heist, stealing a very rare set of jewels from Cartier and the neck of a celebrity, Daphne Kluger (Anne Hathaway). Funnily, we never learn what she’s famous for… not that it matters in 2018.

To do this, they need a team. Cue the recruiting montage, including a down-on-her-luck fashion designer (Helena Bonham Carter), a hacker (Rihanna), a diamond expert (Mindy Kaling), a lifter (Awkwafina), and a fixer (Sarah Paulsen). That’s only seven, but the eighth will come on board late in the running, along with small contributions from a couple of the old boys—Eliott Gould and Shaobo Qin. George Clooney’s  Danny casts a long shadow over the story, but don’t expect him to appear. Richard Armitage shows up as Debbie Ocean’s scuzzy ex who sold her up the river. 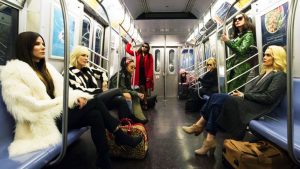 I have to credit Ross and Milch for deftly lifting the cleverness in character and structure from the Soderbergh originals, even if they can’t quite match the funky score and hyper-edited style of the previous films. Bullock and Blanchett are capable counterparts for Clooney and Pitt, though Bullock is surprisingly muted here, all simmer and no boil.

The plot isn’t quite as airtight as it should be—I had a few questions about magnetic necklace snaps, why certain plot elements twist while others remain resolutely straight, and why Lou didn’t bail like she promised she would when her partner-in-crime’s decision is revealed—or at least, why she didn’t make a fuss. It also takes awhile to get going, but the payoff makes it all worth it.  While the stakes never much raise the pulse, all this is better than we had much right to expect. 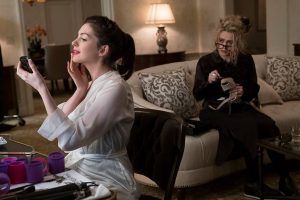 And if you like spotting a sea of cameos, fetching gowns, and bling, you’ll have a ball. As a tennis fan I enjoyed the appearances of Serena Williams and Maria Sharapova, and a well-aimed gag at Anna Wintour’s Roger Federer fandom.