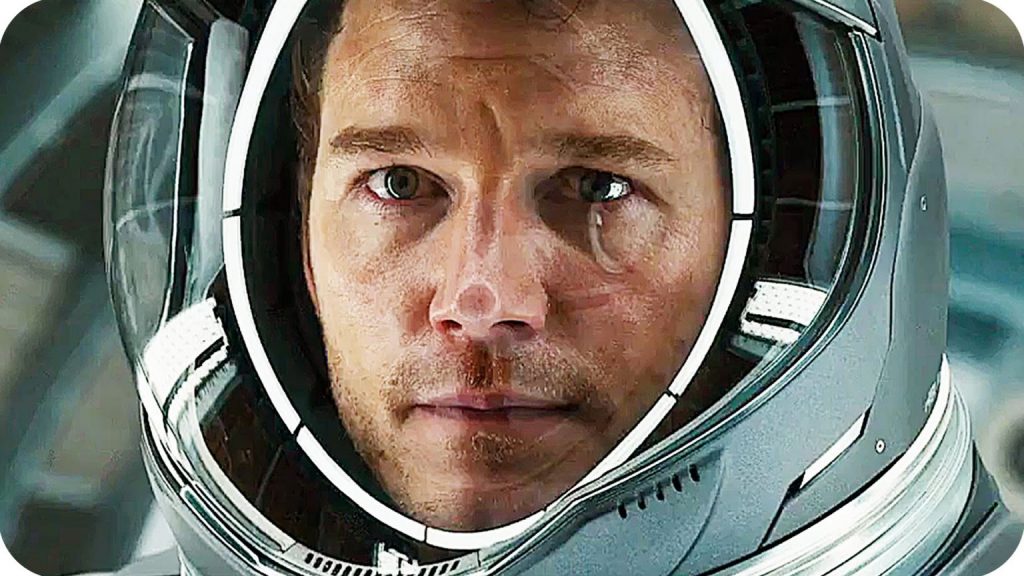 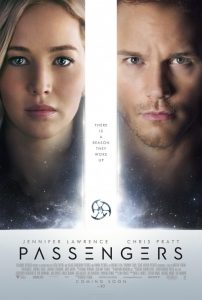 The trailers for this film, despite being a bit muddled, have revealed quite a bit about it. If you’ve seen them then you know Jim (Chris Pratt) and Aurora (Jennifer Lawrence) are passengers on an enormous space ship headed for a distant solar system to populate a new world. They wake up from cryogenic sleep 90 years too early and have to deal with the reality that they’re going to live and die in transit, as luxurious as that experience might be—it’s a lot like the cruiser at the end of Wall-E, except the denizens are much sexier. There’s also a technical calamity that threatens to end their lives and those of the many other sleeping passengers long before they arrive at their destination.

As a fan of science fiction, I recognize the potent allegorical power of a story like this, but it’s a hard movie to talk about without revealing a key bit of plotting that’ll put this review in spoiler territory. 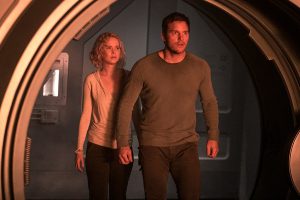 What I will say is this: Passengers has a deeply regressive political perspective. Jim does something deceitful and unforgivable, and the movie expects both the audience and Aurora to understand, love, and forgive him, because he’s basically an adorable, well-meaning guy.  While fate (and the script that gets more cliched as it goes along) offers plenty of opportunity for Jim to redeem himself, the decisions Aurora makes seem to contradict the truth of her character and the very reason she went on this trip.  It ends up being deeply, painfully creepy, a romance couched in Stockholm Syndrome.

The arguments I’ve read in favour of Jim’s decision-making, usually to do with “human nature,” ignore what the movie wants us to feel. It’s one thing to understand him, and it’s another for we, the audience, to be cool with her falling in love with him despite it all and come around to the idea that what he did was OK because LOVE. He still victimizes her. I thought Lawrence was smarter than this. 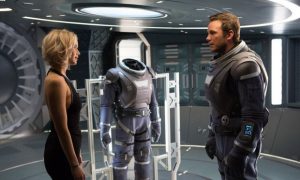 It’s especially frustrating because there’s a better film buried here if it had been taken in a different direction. Early on the tone is played for laughs, which mostly works. This could’ve been a cracking comedy, with maybe a boost from Michael Sheen’s robot bartender, Lawrence Fishburne’s pilot, and Andy Garcia, who appears here in a whiskery but dialogue-free cameo. Passengers also briefly touches upon issues that could’ve been much more deeply explored—corporate influence in our lives and the inequities of class, still a problem in the age of interstellar travel. The opportunity to develop these themes is tossed aside for a focus on the romance between the two leads, with an awful, syrupy score telling us all how to feel. 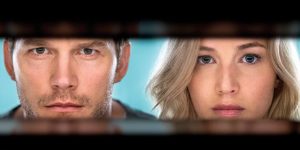 Lawrence and Pratt are currently at peak wattage—especially Lawrence, whose skills as an actor far outpace Pratt’s three speeds: hangdog, perky, and concerned—and there’s some pleasure to be had ogling their hotness as they take turns traipsing around the impressively constructed set wearing very little. But Pratt’s bare ass and Lawrence’s gams are nowhere near enough to to compensate for the film’s fatal flaw and appalling gender politics.