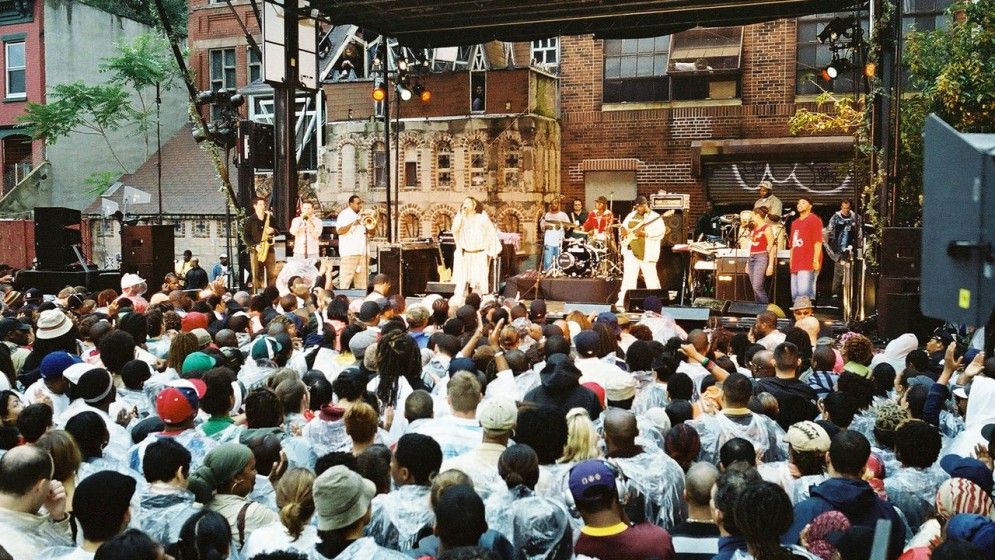 This week Cineplex is screening Jonathan Demme’s Stop Making Sense, the legendary concert film of a Talking Heads performance, shot when the band was touring in support of their 1983 recording Speaking In Tongues. The film is amongst my small collection of concert documents, and I’d suggest it’s pretty much essential for anyone interested in popular music or how professional musicians are best captured on film.

During my most fervent period of music listening, my teens, I wasn’t a dyed-in-the-wool fan of the band. I knew the single “Once In A Lifetime” in high school, but it wasn’t until later that I was introduced to the Talking Heads’ larger body of work through the terrific collection Sand In The Vaseline: Popular Favorites. Then I saw the film, which brought everything together and I recognized how amazing they were.

There’s still plenty of their material I don’t know, but when you watch Stop Making Sense, I don’t think it matters if you’re familiar with their work or not. If you love music, there’s so much to enjoy: the band’s incredible funkiness—rooted in the amazing Tina Weymouth and Chris Franz rhythm section, supported by Parliament-Funkadelic veteran Bernie Worrell (RIP). Though I think of this band as part of a wave of post-punk pioneers like The Police and the B-52s, there was something unique in Talking Heads music that set them apart.

For instance, frontman David Byrne’s exquisite strangeness. It’s his singing, enunciation, and lyrics, along with his stage antics and, in this film, his ever-expanding business suit. There’s a wonderful tension between the goofy art-school aesthetic and a deep groove. It’s geeky intellectualism and sexiness, united.

I love how we begin with a bare stage that’s filled in a deliberate construction, starting with Byrne’s solo “Psycho Killer,”  joined in every successive song by another member of the band and accompanying equipment. As the songs are given added depth and texture with the players, so too is the visual milieu.

Though the DVD comes with added interview footage, I’d call Stop Making Sense a concert film. It’s an art form that doesn’t get much credit. I distinguish it from a music documentary, which explores the narrative history of a band—often with talking heads (*snork*).

I’d say my favourites of either genre, the concert film and the music documentary, is where there’s some overlap.

The Last Waltz, for example, Martin Scorsese’s film about The Band on the occasion of their final show. The concert footage shot at Winterland in San Francisco includes a plethora of guests—amongst them Ronnie Hawkins, Neil Young, Joni Mitchell, Van Morrison, and Bob Dylan— highlighting The Band’s history as collaborators and their importance in the American music scene. Scorsese also interviews the members, who to a man seem totally exhausted. It helps make the argument that 16 years on the road is enough for any musical group. Despite that, they seem undiminished on stage, the music vital and alive, despite the feeling that they could have written “The Night They Drove Ol’ Dixie Down” in 1870.

The guys behind Banger Films, Sam Dunn and Scot McFadyen, their work also crosses the lines between documentary and concert film. Though I’m also not a hardcore Iron Maiden fan, the film Iron Maiden: Flight 666 is a terrific film about a bunch of old pals enjoying how fortunate they are, travelling the world in style while playing huge concerts to rabid fans. Banger’s straight ahead docs, practically anthropological studies of music, including Metal: A Headbanger’s Journey, Metal Evolution, and Rush: Beyond The Lighted Stage, are also great fun, as are their full-on concert films, like Rush’s Time Machine 2011: Live in Cleveland.

One of my favourite concert/documentary crossovers is Bring On The Night. Michael Apted, director of the renowned Up series, investigates the launch of Sting’s solo career in 1986. The rock star was part of The Police, but that band had just burned up in much mutual acrimony. This was a chance for the front man to make a mark on his own.

Words like “jazz” were used to describe his new music direction, but in retrospect it was much more an ’80s pop sound. He’s backed up by a large band of African-American musicians, most of whom had worked in jazz and R&B acts in the states. The documentary is most delightful when they’re on camera—Branford Marsalis is a particular sensation. Someone should give him a talk show. But they’re all charming, funny, and enthused about this opportunity, rehearsing in France before a series of shows in Paris.

Your patience with Sting and his baked-in pomposity may vary, but he’s the one who has to manage the pressure of launching a new career without those other two guys. Plus, his wife, Trudy, is about to have a baby. The film is nicely split between behind-the-scenes stuff and the big concert in Paris.

A few others I’d recommend: If you can find it—at least some of it exists on YouTube—check out PJ Harvey’s Reeling, which captures the iconoclastic artist on tour back in 1993 when she was in her rawest phase. In front of the camera she’s refreshingly personable, much less intimidating than her imperious stage persona, though we get lots of that, too.

Also essential is Dave Chapelle’s Block Party, where the comedian helps bring together a group of musicians—including Kanye West, Jill Scott, The Roots, and a reunited The Fugees—for a hell of a concert in Brooklyn.

U2’s  Rattle And Hum doesn’t get much love. It captures the Irish band in its most self-serious period and reveals their unabashed America-conquering ambition, but also provides their bona fides as inheritors of the mantle of Biggest Band in the World. I suggest watching it in a double-feature with their ZOO-TV Live From Sydney concert movie, released five years later, and see how much they changed… maybe in response to the criticism. They’re still a bunch of earnest buggers, but they seem to be having so much more fun deflating their image.

Speaking of ambition, check out Bruce Springsteen: The Promise to witness the incredible work ethic and his restless brilliance of New Jersey’s finest. It documents the writing and recording of Springsteen’s 1978 masterpiece Darkness On The Edge of Town.

Runnin’ Down A Dream is Peter Bogdanovich’s four-hour look at Tom Petty’s career, album by album. As far as music documentaries go, it’s the best thing out there, and makes you wish there was one like it for every one of your favourite artists. I dare to you to watch it and not come away impressed by both Petty’s music and his iron grip over his creative direction.  Even the guys he fired from his band can’t bring themselves to say anything bad about him. I think they’re all in awe.