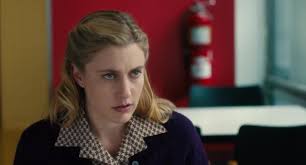 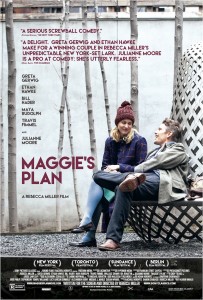 Maggie (Greta Gerwig) is a New York academic who’s decided to take fate into her own hands, as she explains to her friends Tony (the current MVP  in modern American comedies, Bill Hader) and Felicia (Maya Rudolph). Unable to sustain a relationship, she’s going to have a baby on her own. She sources a sperm donation from an old chum, Guy (Travis Fimmel, still using some kind of nordic accent from his day job in Vikings, despite his being an Aussie). Cue a scene with a bottle, a predictable appeal for “the old fashioned way”, and a sudden change in plans:

Maggie meets John (Ethan Hawke), a fellow prof at the college and an aspiring novelist. Soon she’s falling for him, and him for her. The complication is Georgette (Julianne Moore), John’s tempestuous wife. But the marriage is troubled, and it doesn’t take much for John and Maggie to hook up.

Fast-forward three years. Maggie’s had a baby with John, and is pretty much taking care of John’s two other kids (from the previous relationship with Georgette) while John works on his book. Maggie’s feeling neglected and unhappy, so hatches a half-baked plan to get John back together with his ex-wife. 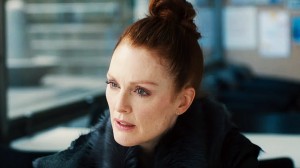 And that’s the crux of it, another entry in a trend of awkward New York comedies with deep indebtedness to Woody Allen. It’s fine—to be frank, I wish there were more filmmakers working in Allen’s wake. Maggie’s Plan is also the next step on Gerwig’s career path playing sartorially challenged Manhattan busybodies. That’s also fine—she’s found a niche and is clearly very good at it. (Though I would pay to see her as a glamour-puss sometime.)

The problem is that, while the romantic plot twists are diverting enough, the theme of agency versus fate is set up but not especially explored. It’s like the script doesn’t quite trust its reason for being.

Also, there aren’t nearly enough jokes. This was a problem with Gerwig’s Frances Ha and last year’s Mistress America, which I liked more. Allen’s best work isn’t just about self-conscious, urban love and heartbreak, it’s also wall-to-wall with gags. Hader and Rudolph get a few, but Gerwig and Hawke, who’s otherwise terrific, sometimes feel like they’re cast in an off-off-Broadway play rather than delivering the light touch this material needs.

The worst thing in it is Julianne Moore’s broad, Lili Von Schtupp accent, which is supposed to be Danish. (Trust me, it’s not.) With the added lisp, it threatens to capsize every scene she’s in. It isn’t until deep into the third act and she has a moment to flex some dramatic muscles that she comes off as something other than a cartoon character. This is especially disappointing when you consider the entirely plausible accent she rocked as Maude Lebowski.

Still, despite these issues, Maggie’s Plan works thanks to the energy of the cast, fidelity to genre tropes, and great New York locations—it shows a lot of love for Washington Square Park in winter.