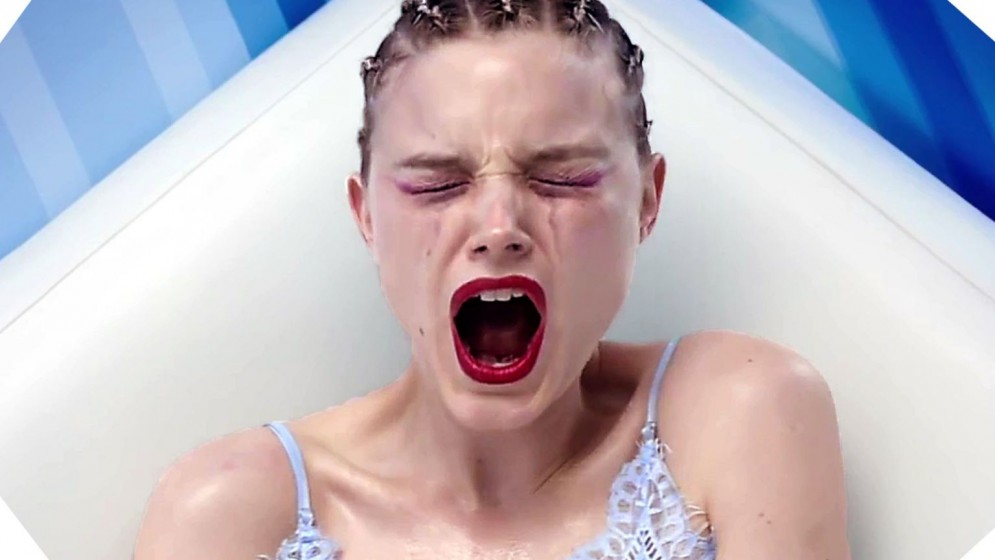 This one upset some folks at Cannes, and it’s easy to see why. Promoted as a horror, it’s no more a horror than Under The Skin was. There are moments of gore late in the running, and a little cannibalism and necrophilia for good measure. That can put some folks’ noses out of joint. Jesse (Elle Fanning) is a little girl lost, a 16-year-old who washes up on the shore of the LA fashion industry full of femme-bots and replicants. She gets signed to an agency right away (in a one-scene cameo from Christina Hendricks) and meets a good-hearted photographer (Karl Glusman). She also comes across a couple of very threatened models (Abbey Lee and Bella Heathcote) close to their expiry dates, and a friendly make-up artist (Jena Malone). She’s living in a fleabag motel in Pasadena (where Keanu Reeves is a highly entertaining douchebag manager) while trying to impress fashion designers (like one played by Alessandro Nivola).

Refn cares little for dialogue or suspense. He uses images and score to set a mood, slipping into the audience subconscious. Since Drive and through Only God Forgives, his touchstone has been American cinema in the 1980s, and here he doubles down on the work of the Scott brothers, Ridley’s Blade Runner and Tony’s The Hunger, specifically, with a little Adrian Lyne thrown in for good measure. He also creatively molests Brian DePalma’s Hitchcock obsession and touch of sleaze.

What you take away is image fragments and moody echoes, throbbing sounds and the moon in the sky, one huge eyeball. The demon in question is an inverted triangle, or maybe Fanning herself. Her work here is sterling—she goes from awkwardly ambitious to the thing everyone tells her she is, a gorgeous, bloody  immortal. A movie about narcissism as an unholy force—seems very relevant. Word is that Refn rewrote the script while shooting it, which makes any of its coherence a surprise, until it stops. The third act goes desperately off the rails, making next to no sense. It has the feel of something slapped together at the last minute by an auteur afraid to do anything that might be labelled conventional.

But no worries on that account. The Neon Demon is flawed and more than a little fucked up, but it sure isn’t dull.