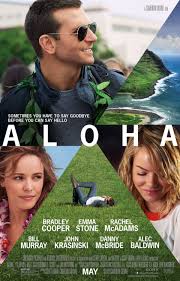 Written and Directed by Cameron Crowe | On Demand

Aloha is a movie trying to do a lot. Maybe too much. Its plot rambles here and there without a lot of focus.

Here’s the question, then: If problems like that are dealbreakers for most frothy romantic comedies, how come I had such a good time at this one?

The best reason I can come up with: Crowe, whose work I’ve enjoyed from Fast Times At Ridgemont High right through Almost Famous, is swinging for the fences this time, making a fizzy romcom with shades of geopolitical noir thriller. It’s arguable whether he succeeds at either, but I really enjoyed watching him try.

I love his wild ambition. There’s so much going on,  with a few subplots that get underserved, I wonder if there’s a much longer cut of this waiting for us on Blu-Ray, an Untitled Lei edition, say.

Whatever this was meant to be, what is on screen is wacky, unusual, and frequently charming.

And fun. Don’t forget the fun. 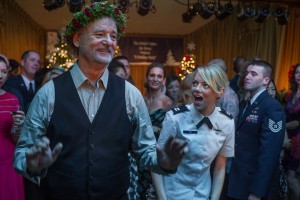 Brian Gilcrest (Bradley Cooper at his most eye- and tooth-sparkling) is coming home to Hawaii after years away. He was a military boy who took a job in the private sector, somehow screwing it up badly, barely surviving a jaunt in Afghanistan. This is his second and probably last chance to do something right, working for billionaire Carson Welch (Bill Murray), helping to swing a deal with the native Hawaiians so Welch can build his rocket factories on their land. Or something: his actual job is a little vague, but he seems to be a man with many talents, from negotiation to high-end anti-hacking skills.

Complicating matters is Gilcrest’s ex-girlfriend, Tracy (Rachel McAdams), now unhappily married to a tall, mostly silent man in uniform, Woody (John Krasinski), with two kids. Also in play is Allison Ng (Emma Stone), a hyper-enthusiastic pilot and advocate for the native Hawaiians, an officer assigned to babysit Gilcrest for the few days he’s on the island. Filling out the cast of characters is an old military buddy of Gilcrest’s, Fingers (Danny McBride), and crusty General Dixon (Alec Baldwin). 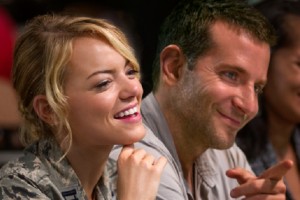 This is the kind of movie where the plot really should just be background for the actors to charm their way into your affections with lots of scenes of wit and flirting. They do when they’re allowed to, but a little too much time is given over to machinations: Whether activist Dennis “Bumpy” Kanahele (playing himself) will allow Welch’s company (which Gilcrest represents) to take the land, or Gilcrest figuring out what Welch is really up to, and what he’s going to do about it. There’s also some business about a rocket launch that feels like it’s wandered in from some other kind of movie. And all this against the strange coupling of the American military and the indigenous culture. Despite his appearance in the film (on the soundtrack and in a photo), this isn’t an Elvis movie.

But here’s the thing: when Aloha works, it’s adorable.

If Emma Stone wasn’t already a star, her Ng would be a star-making performance. Her claim to the title of America’s Sweetheart is genuine: she’s irrepressible, like Lucille Ball resurrected, making Cooper look good in her shiny wattage. I want a sequel just about her. As Gilcrest, Cooper is fine, but he just doesn’t seem as magnetic, nor as damaged, as I thought he should be. He lets his grin do most of the work. But the hardcore Bradley fan might disagree. 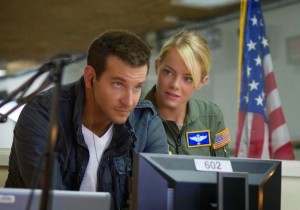 My favourite scene takes place at an Officer’s Club, with every major character in attendance. Crowe manages to stage some dynamite banter, and have practically every person throw meaningful glances at everyone else, and at no time do you lose the thread of what’s going on. It’s a classic moment I didn’t want to end. But it does with Bill Murray dancing with Emma Stone to Hall & Oates’ “I Can’t Go For That (No Can Do)”. I’m glad I lived long enough to see that. 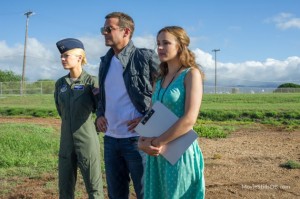 Crowe has always had a sharp ear with his soundtrack choices and musical cues. He’s unafraid to mix in the deep cut rock numbers with the score and somehow makes it all work. It brings the right kind of tonal sheen to the proceedings, whether it’s Elvis, the Stones, or, yes, Hall & Oates, and I really enjoyed it.

The past few days I’ve been seeing a host of negative reviews on this, many of which I just don’t get. The knives are out, and the movie, even in its admittedly messy state, doesn’t deserve it. It could be that romantic comedies are so far out of fashion that there’s a knee-jerk reaction to one that dares to open wide and play with the genre a little.

The last two features Crowe made were the flabby Elizabethtown and the sweet but forgettable We Bought A Zoo. Aloha is not like those movies—it’s flawed but it’s very fun, and has a ton of personality. With so many safe, dull comedies dramatic romances filling the multiplex, don’t let the negativity keep you from giving this imperfect, charmingly unique movie a try.

And if you need a better reason? See it for incomparable Emma Stone, if nothing else.