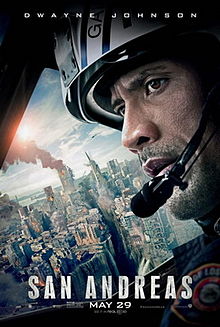 Directed by Brad Peyton, Written by Carleton Cuse from a story by Andre Fabrizio and Jeremy Passmore

A question came to mind while I took in the trailer for this movie: What distinguishes San Andreas from a previous disaster picture like 2012, beside the fact that Dwayne Johnson is a lot more fun to watch these days than John Cusack? I also like Carla Gugino, but come on, folks.

For me, I’m generally not a fan of movies where nature is the villain, even less so at times like now when Nepal is still digging out from under its terrible quake. Hard to feel like entertainments like this are, well, entertaining. San Andreas made me feel a little bit for the characters thanks mostly to the performers ability to emote, but mostly I just gazed agog at the massive wash of ones and zeroes, a 114-minute CGI parade.

Johnson plays Los Angeles helicopter rescue pilot Ray who gets to be a hero right from the start: In the opening scene he rescues a woman from her car hanging on the edge of a chasm. Funnily enough, this sequence has some of the worst FX in the movie. The car looks like it’s made of rubber, and the entire sequence looks like it could have appeared in a 1970s TV series Chopper One. 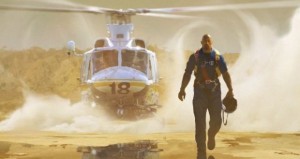 Fortunately, things improve somewhat with the dramatic foundation about to be shaken: We find Ray is in the middle of a divorce from Emma (Carla Gugino, who’s better than this material). A daughter of theirs died while rafting, which has been the major problem in their relationship. Emma is already shacking up with sensitive rich guy Daniel (Ioan Gruffudd).

Meanwhile, Ray and Emma’s remaining daughter, Blake (Alexandra Daddario, who impressed in True Detective as Marty’s volatile lover) gets to be capable in a pinch (she’s picked up all kinds of handy knowhow from her pop) and dazzle a pair of visiting British brothers (Hugh Johnstone-Burt and Art Parkinson). And Paul Giamatti gets to be the seismologist who, moments before the arrival of The Big One, figures out how to predict it, while The Good Wife‘s Archie Panjabi gets to interview him all about that.

Look out for the Kylie Minogue cameo, and for Hoover Dam giving way.

Everything in this movie’s dramatic heft is boilerplate and predictable. Do you think Ray’s gonna get a chance to redeem himself and save his one remaining daughter from a similarly watery death? 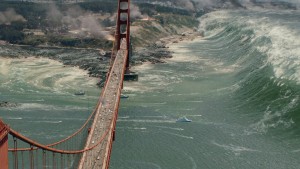 Credit time: Johnson gets believably teary, Gugino is a class act, and Daddario’s eyes are a blue million miles. Those three provide just enough human interest and family connectivity to anchor our caring amidst the falling buildings and upending cruise liners.

Otherwise, it’s so of a genre, one that should have long ago gone the way of feathered hair, it’s hard to take any of it seriously.

It’ll happen twice this summer, with San Andreas and Terminator: Genisys. It also happened last year in Godzilla, and the year before in Pacific Rim: The Golden Gate Bridge has been destroyed or seriously damaged in movies. Here are a couple of supercuts. They overlap in a few places, but between the two I think you get a pretty comprehensive take: