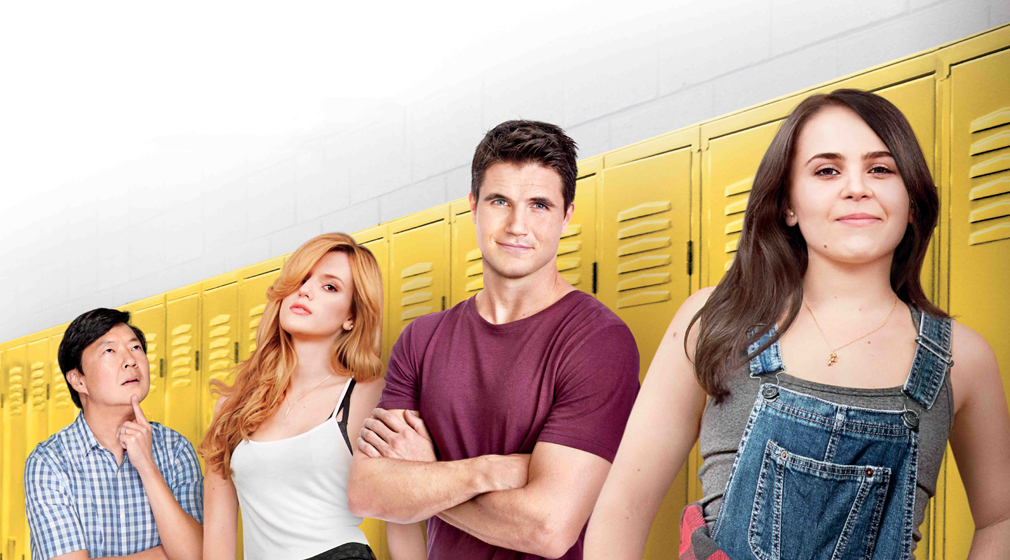 Directed by Ari Sandel, written by Josh A. Cagen from the novel by Kody Keplinger

Bianca (Mae Whitman) is a nerdy horror film fanatic at a typical high school with its typically cliquey tribes. Her two best friends, Casey (Bianca A. Santos), and Jess (Skyler Samuels), are glamazons, while B’s next-door-neighbour, Wesley (Robbie Amell), is a lunkhead who can count honesty along with his pipes among his positive traits: He tells her she’s a D.U.F.F., a Designated Ugly Fat Friend, the girl guys butter up in order to get to her hotter pals.

Yeah, the politics of that acronym are obnoxious, but in the social Darwinism of high school elites, it doesn’t seem far-fetched. What is a little unbelievable is this trio would actually be such good friends—what do they even have in common? Furthermore, while I can see why Mae would have some self-esteem issues when her friends get all the attention, Whitman is far from fat or ugly. She’s actually really cute, and it simply isn’t believable that she wouldn’t reap the benefits of being so much more approachable and fun than her so-called “more attractive friends”, not to mention being into stuff boys are into. But that’s not to say while its identity politics are problematic and shallow The DUFF doesn’t work. It manages to set up a story that, despite some calculated and predictable plotting, is pretty entertaining. The script has some wit and style, and the cast is winning, especially Whitman, who creates an entirely credible character with more than the script gives her. A scene when she and Arnell go into the woods together is genuinely sweet.

There’s just a lot here we’ve seen before. I guess what disappoints is that this genre is still living in the shadow of what John Hughes did 30 years ago—and the filmmakers know it, with an opening V/O that blatantly references The Breakfast Club. The homage would be fine if the movie was bringing something fresh to the table, but The DUFF is just recycling those tropes, even updated with today’s terrible fashions, viral video, and the ubiquity of social networking. Taken as a whole it has some fun moments, but there’s not much here anyone who’s already graduated hasn’t seen before.